Saturday, Mar 18, 2006 by Corin Tucker's Stalker (@DennisFarrell)
Know of an awful site? Send it to us and become a hero!

The Ultimate Gamer, submitted by me. I like video games. Given the choice between shooting myself in the face and playing a video game, I will take the video game nine times out of ten. During a recent search for the answer to a particularly difficult puzzle in a game I was renting (turns out the Start button starts the game), I came across this site for a tv show about video games that apparently became defunct in 1998. Hosted by a redheaded woman who overemphasizes her sex appeal to offset the annoying Tommy Tallarico drone at her side, things start out embarassing and only get worse. 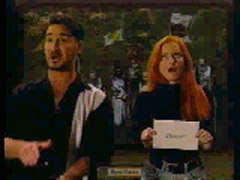 Now that's comedy! In addition to being horrible, the site is sort of interesting as a snapshot of that period in computer gaming. Seeing features on Quake 2, The Journeyman Project, and Mechwarrior 2 alongside mentions of Kali and IPX is pretty neat. It also makes me feel old because it seems like only yesterday that I installed Quake 2 for the first time and played CTF all night while listening to the Beastie Boys' new album Hello Nasty. In reality it's actually been... eight years? Eight years. Shit. Okay, now I really hate this site.