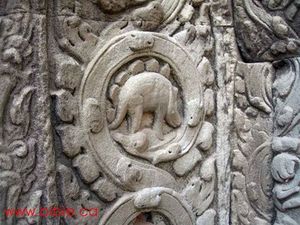 Dinosaurs in ancient Cambodian temple PART 2, submitted by theshockedshocker. Some of you might recall that this was my ALOD for my article two weeks ago. Ordinarily, repeating an ALOD is the kind of offense that might warrant the death sentence, but I got such an intelligent email about it that I had to do a repeat just to dicuss the points it raised.

To remind you, this Awful Link is about a carving of a Stegosaurus that some creationists found on an ancient temple in Cambodia. Last time I made the mistake of merely making fun of them, and received the following email:

"It DOES look a bit like a stegosaurus. I felt like your dismissal of it was done rather childish. So I'm simply curious as to what the official line is as to what the carving really represents.

I'm not e-mailing you to bash or anything, it just seemed like you skirted around what the site was trying to say."

You're right John. I should have addressed those points. Let me do that now.

2. You are one of the dumbest people in the entire world.

Hope that cleared a few things up for you!