The Britt Slater Show (Thanks, eroot!) 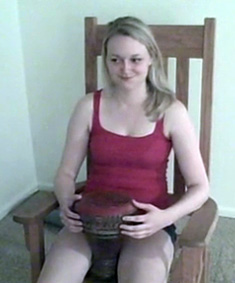 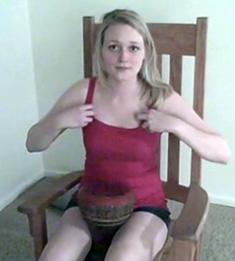 For our second entry in this week's "women following their unlikely Hollywood dreams" series, we have Britt Slater, an Iowa resident who video-propositions Oprah Winfrey to give her a tv show. Her concept: A show where viewers (or "tunees," as she calls them) send her requests and she does whatever they ask! (Perhaps someone already wrote in and asked her to film her audition with a bongo drum between her thighs; no other explanation for this is offered.)

"I think it would be great to show the world how to do something that they've always aspired to do," Slater explains. "It could be something weird ... that you just would like to get your jollies off to ... or it could be something that you really, really, really want to see done because you have a really severe passion behind it." If Slater were to get her "I'll do whatever you guys want on the air" program, the inbox would surely overflow with "get your jollies off" requests. However, due to the wild implausibility of her premise (and, to a much lesser extent, her decision not to edit out the giggly, awkward parts of her video), The Britt Slater Show might never air, meaning questions such as "How do you become a plus-size model?" and "How do you paint your toenails?" will go forever unanswered by network television.