Wednesday, Jun 23, 2010 by Andrew "Garbage Day" Miller
Know of an awful site? Send it to us and become a hero! 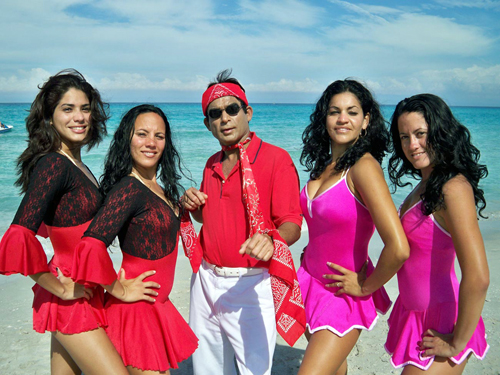 Hank Khan, director and star of American Bride, recently posted a Craigslist ad seeking international distribution for his film. Feel free to contact him directly (hankyhunky@yahoo.com!) if you represent a distribution company; otherwise, prepare to get in on the ground floor of the next The Room-caliber incompetent-vanity-project sensation!

Khan plays "Bollywood superstar Raj Kumar," who's looking for love in the U.S.A. after his arranged marriage flops. Khan resembles an Indian Jeff Goldblum, and acts like a combination of Michael Scott's most obnoxious backward-cap hip-hop and "cookie cookie" Indian impressions. The trailer suggests Coming to America, with less (no) recognizable jokes, more scenes of people getting sprayed with liquids, and a musical number that's not so much Sexual Chocolate as it is "Elton John joins the Bloods." Just when you think you've seen it all, Raj Kumar speaks the title of the movie, punctuating this portentous event by pushing his sunglasses up the bridge of his nose. When you see this happen in the context of the actual film, it surely will be a moment that changes your life forever!