Saturday, Sep 01, 2007 by Dennis "Corin Tucker's Stalker" Farrell (@DennisFarrell)
Know of an awful site? Send it to us and become a hero!

Dino-Riders: The Video Game - I stumbled across this last week while looking for a Dino-Riders image to accompany my Jurassic Park IV article, and bookmarked it for my own amusement. This game, however, is not a thing to be selfishly coveted by one man.

It is a masterpiece of modern game design that is meant to be enjoyed by the masses. It is the ideal way to show off the power of your brand new $700 NVIDIA 8800 Ultra video card with 100 gigs of ram and a watercooled DVI output slot. 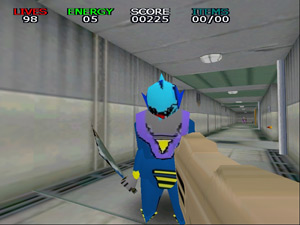 It is a malformed penis prodding at a clown who is blue, either from a lack of oxygen or because he is saddened by the blurriness of his industrial surroundings. Don't fret, sad clown! There's a ton of variety to be found in the environments of Dino-Riders: The Game! Why, one minute you might find yourself in Ice-Age I: 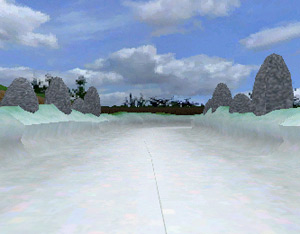 And the next you'll be transported to the exotic locale of Ice-Age II: 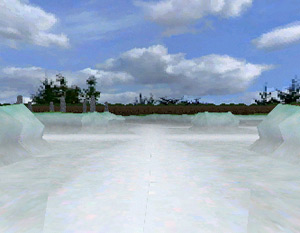 Did I mention that this was made after the release of Quake 2? As in 2006?

While I'm positive that you'll want to buy the full game (although no option to do so is mentioned anywhere on the site), this demo will give you a small taste of the thrill ride that awaits you. Be sure to download the setup.ini file in addition to the demo itself, because the more complicated an installation is, the better the game will be.

If I can locate the retail version, I'll try to put together a game guide in an upcoming Video Game Article.