The Happy Motel (Thanks, Numeron!)

The Happy Motel is a hip catering company from Australia that "injects food and drink with theatre and eccentricity," which sounds insufferable, but that's nothing compared to their obnoxious Web site. Warning: Embedded audio; also, you might want to put on a welding mask before viewing, or you'll risk being blinded by a color-changing animated background and flashing, seizure-inducing image tiles! 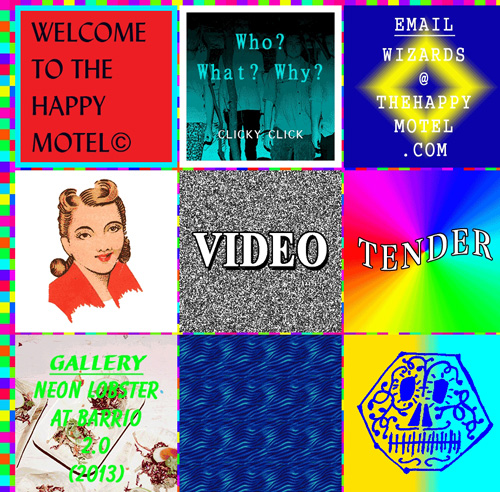 The Happy Motel's home page looks like this, but with twice as many tiles, and they're all flashing.

Figuring out which tiles actually link to something, and which are just there to add to the zany, random factor is like playing a game of Minesweeper. The only semi-useful information is on the about page, where the four gastronomical "wizards" behind it all have conjured up some cloyingly "quirky" descriptions of their business:

A food and beverage philosophy where taste and tradition prevail and an environment that welcomes and engages combine to invite the customer along all levels of creation. We also get into pottery, ping pong and may contain traces of tree nuts and dairy.

Tree nuts and dairy, that's almost as wacky as monkeys and cheese!

To be fair, not all of the images on this site flash and blink annoyingly; some of them just shake.

These dingo-gringos specialize in what they call "Australexican" food, which is supposedly more authentic than Tex-Mex according to one of their videos (two of which have nothing to do with anything because, again, ZANY RANDOM). To complete the experience, they serve it out of a big fake taqueria that looks like the physical embodiment of a Tumblr blog obsessed with Mexican culture. Oh, so it's cool when foodie-auteurs hang up stupid junk on the walls, but tacky when T.G.I. Friday's does it???

More recently, The Happy Motel has started branching out into cuisine from made-up countries, which is so egregiously "whimsical" it borders on obscene. It's like a Wes Anderson movie came to life and started serving you a spit-roasted kangaroo. Which they actually serve, by the way. Crikey!