Wednesday, Mar 19, 2003 by Zack "Geist Editor" Parsons (@sexyfacts4u)
I consider myself to be an expert on fishing of all sorts thanks to the two times I went fishing when I was eight years old. Once I also caught a catfish in a bucket and many times did my deft fishing skills bring home the bacon in the form of very non-bacon like crayfish and tadpoles. Adding to this already impressive array of firsthand fishing experience I once saw some three minutes of a fishing show on ESPN 2 before I switched back to the hit Family Channel sitcom “Kangaroo President, PI”. Fishing is a dangerous sport though. In fact it is the second leading killer in Red Creek, Tennessee next to heart disease, so it goes without saying that fishing should not be taken lightly. With the immense knowledge contained within this guide I will teach you to fish safely and fish successfully. 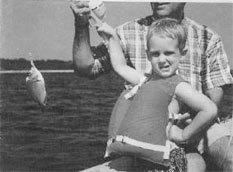 Fishing can be a source of great memories or profound emotional trauma.Many people get all up in arms when animals are mistreated, and rightfully so because animals happen to be our illiterate and messy cousins. We evolved from animals and one day different animals may evolve from us, which means it's important to maintain good diplomatic relations with the animal kingdom. For most creatures of nature this means either ignoring them or domesticating them and slaughtering them humanely by boiling their blood with sun-reflecting parabolic mirrors. The act of fishing seems nowhere near so sterile and humane. A hook brutally plunges through the mouth or gills of a fish and you tug it, bleeding and gasping, out of the water. There it sits on the mud next to a pond or stream, flopping and suffocating while blood gushes from its wounds. You may snip the line or remove the hook and throw the fish back, but obviously a fish that has a hook injury is going to have a lot of trouble fitting in again. It will be ostracized by its fellows, looked down upon as stupid for falling for the tricks of the monkey beasts that walk above the hallowed water.

Do not let these concerns about mistreatment preempt your manifest destiny of fishing; you need to understand the whole picture. Fish are evil. Not only are they constantly scheming cruel deeds, they also absolutely hate us. There is nothing in the tiny heart of a fish but malice for those who live outside the water. Should fish ever become capable of it you can rest assured they would burn our cities to the ground, murder us wholesale in our homes, and laugh as their untold legions usher in a new era of fish dominance. Remember this when you are fishing and you pull up that trout. Look into its eyes, for within those alien orbs is a malice so complete that it's a wonder a gutted fish is not black.

Step One: Gear Up For Battle

Tying a piece of string to a stick and putting gum on the end is no longer a viable option when going toe to toe with the cosmopolitan fish of the 21st century. You need to spend thousands of dollars on high end reels, specialty lines, all manner of lure, and many other expensive gadgets to help you overcome your prey. Remember that when you hunt the fish it is hunting you. Together you are a pair of opponents circling, each looking for the weakness of the other. Get out the check book, fire up those credit cards, because it's time to go shopping. 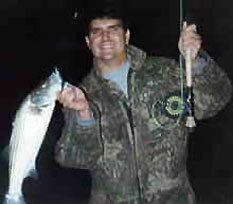 I'm assuming this fish-invisible man has lost his floppy hat.

A Boat - Sometimes you won't actually need a boat to fish. You can just stand next to water and actually throw your fishing junk into the water and the fish will get caught that way. Other times you have to go out into the water and that's where a boat enters the equation. Boats are designed to carry people across water without drowning them. They are sort of like submerging your feet into concrete filled buckets only the exact opposite of that. When it comes to selecting the right boat for your fishing needs you need to factor in where you plan to fish. For example if you planned on fishing in a placid river or pond you would only need a row boat or canoe, whereas if you planned on fishing in the liquid oxygen seas of Neptune you would need a pressurized vessel shielded against low temperatures.

Some Fishing Poles - Fishing poles are the long fiberglass thing that you put the fishing string and hook onto. They're sort of like a high tech stick and not all fishing poles are made equal. Shop around and find one that feels comfortable for you to use and fulfills your requirements as to what you intend to catch. If you can't find a fishing pole that feels right then a loaded revolver will serve as an adequate substitute. You just have to alter your methods slightly when fishing.

Fishing String - Much like poles the fishing string you will need is determined by what suits your needs best and what you will be attempting to catch. Fishing string comes in various sizes called "tests". I have no idea what that means but you can generally tell how strong fishing string is by how thick it is. Remember that some fish reach sizes of like a mile long and a billion pounds, so if you're going to go fishing for the biggest fish ever you're going to need a braided steel fishing cable at least as thick as a bus.

A Tackle Box - Think of a tackle box as your lunch box containing a lunch you have to catch yourself. Sort of like a box containing a magical hamburger that escapes whenever you open the top and you have to chase it down. I had a dream about that once, but after all the effort of catching the magical hamburger I'll tell you what; I ate like a goddamn king! Some tackle boxes even have enough room for a thermos and an apple, further reinforcing this concept. You put things like your hooks, lures, and bullets in here. You can put other stuff in here too if you want. My tackle box is full of batteries and ants and I don't know where the ants keep coming from but we're a team now and where I go they go.

Fishing Clothes - Just like any sport fishing has a uniform. You should start out by buying a floppy hat and putting a bunch of random crap out of your tackle box onto it. Mine is covered with batteries and ants. Once you have the hat the rest of the outfit should fall into place. If you're going for the casual fisherman look you should get a vest with a lot of pockets so that you can store lures and really small fish you catch in them. If you want to be all business then get camouflage coveralls from a hunting store. Fish don't see in color and they can barely see outside of the water at all, but this will help disguise you from deer and wolves that hate it when people fish. I don't know why, it's just this thing they have a problem with.

Reels - The reel is the box you stick onto your fishing pole that contains all the fishing string you bought in a "spool" or "pile". Reels are all the same so just get the absolute cheapest one you can find.

A Fishing License - In this crazy modern workaday world the government doesn't want any terrorists or Mexicans stealing our fish so they force you to get a fishing license. Fortunately, most park rangers and game wardens don't follow the rules very closely on this one so even a token effort is sufficient. My fishing license consists of a Blockbuster Video card with "OK: CAN FISH" written on it with permanent marker. It raises a lot of questions when I go to rent my Spanish language workout videos on Tuesdays but the game wardens just nod and smile and sometimes try to feel you up if you aren't careful.

Those are the basics but that's not all you need to buy before you can get started. Let's move on to the fine art of picking the correct bait to suit your needs.
Previous More Guides Next