The way that people, especially Americans, deal with celebrity culture is fucked up. Some people think that the measure of one's character is pretty much decided by the number of people who can recognize you. I accept that. I don't agree with it, but I accept it.

I refuse to accept this woman.

Karen might not be the most celebrity-obsessed person in the world, but she's the worst I've ever seen, for sure. By her own admission, she spends a significant portion of her time "tracking down" celebrities, which is already pretty intense language to use, something more akin to what bounty hunters do. But given the sheer volume of famous people this goddamn woman has met, I'm pretty sure she's entirely right in using that term.

Karen has taken pictures with tons and tons of people and categorized them. If you click on a category, it takes you to a gallery of pictures of her GIGANTIC FUCKING MOUTH with a famous person in the background. I say that mostly because that goddamn mouth just immediately becomes the focus of any picture, but sometimes it is literally true, like in this picture of some asshole from Coldplay, who is apparently entirely unaware that he is currently being met.

I've gotta say, though, for such a wildly creepy woman, she's assembled a surprisingly diverse collection. I mean, she's not putting avant garde filmmakers on there, but she seems equally as excited to meet the guys from Cypress Hill as she is to meet Paris Hilton or "Mil Mascaras, Mexican wrestler." It certainly doesn't hurt that she also considers pretty much anyone who has ever appeared on television to be a celebrity. Hopefully one day she'll run into David Thorpe and remember him from that one time he was on G4. Then, Goons, then we'll know we've truly made it. 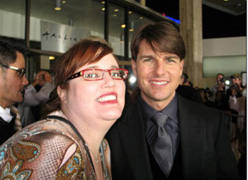 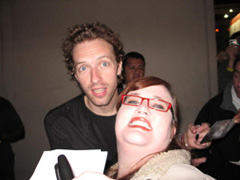 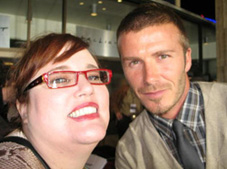 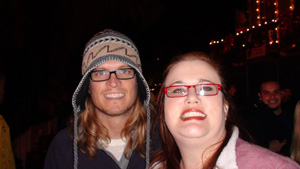 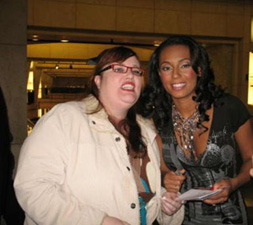 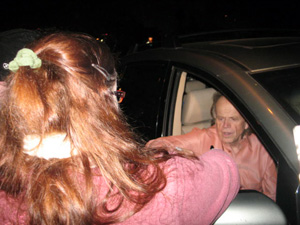