Honestly, this site is a treasure trove, and I wish I'd found it sooner, before all the GeoCities and AOL Homepage links had died, so I could see their "Home on the Range," or "J.J.'s couch." The links that still work are good, though, don't get me wrong. There's a nice little page for Michael, whose "Mysterious" nature is only enhanced by the fact that every related bio-info page is now gone. The "cast list" suggests this might be a polyamorous relationship, which is probably a little weird for their daughter, but I'm sure she'll adjust. After all, at sixteen, she's a big fan of smoking, punk rock and Hunter S. Thompson, which is pretty much code for "the coolest girl at Rainbow Barbies Senior High."

I'm not sure where the title "Chasing Hawks" comes from. There's a nice little hippie/Earth Child vibe going on, kind of, though more of the kind where they realized they could make way more money hawking (no pun intended) that shit in the suburbs. I'm beginning to lean towards the idea that one or both of them may be Native American, just by virtue of the "Lakota Water" link, which sends me to a Web site for some sort of tribe on the "Rosebud Reservation." 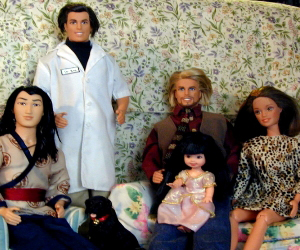