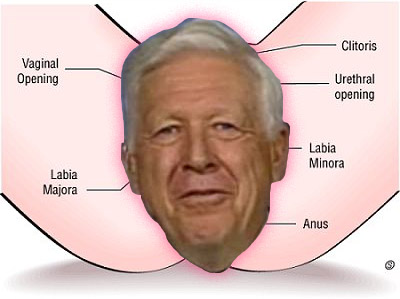 Last week, billionaire Rick Santorum backer Foster Friess came under intense media scrutiny for a joke he made during an MSNBC interview: "You know, back in my days, they'd use Bayer aspirin for contraceptives," Friess said. "The gals put it between their knees, and it wasn't that costly." Friess has since apologized for the statement; since we wouldn't want his authentic opinions on matters of women's health to go unreported, we contacted Mr. Friess to clarify his positions. 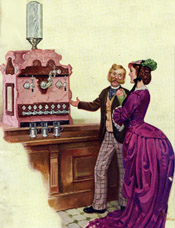 Obviously, I was making a little bit of a joke when I suggested that gals might want to hold a Bayer aspirin between their knees to keep from getting pregnant. That was just a thing we used to say back in the old days, and I think it slipped right by some people out there. The truth is, this whole contraception issue has been blown way out of proportion. It's not a costly thing, and I don't see why the government needs a hand in it.

Back in my day, if a gal didn't want to get pregnant, she didn't get married. Simple as that. The taxpayer doesn't need to fund the loose lifestyles of modern women; if these gals don't want a baby, they can just work out a deal with the local soda jerk for to wash between her knees with Pepsi-Cola. It worked for the town prostitute back in Rice Lake, and she was healthy as a bull moose. It was cheap, too. I mean the Pepsi-Cola was cheap, not the town prostitute! She was a real elegant gal.

Breast cancer is a terrible thing, and gals surely need to be vigilant about checking for those lumps in the bosom area. But doesn't it seem like folks have been making a mountain out of a molehill with the whole issue? (And I know a lot of gals with molehills on their chests are probably wondering how to make 'em into mountains, but don't go ordering that bust growth snake-oil cream from the back of a funnybook yet! Ol' Foster was speaking figuratively!) For example, do we really need to have those pink ribbons everywhere? I'll tell you what, there's no good reason to constantly remind fellas that gals have bosoms-- you can be dang sure they already know it!

Those pink ribbons are just riling up their libidos, and you can bet it's to blame for some wolf whistling and grabbing. The only time fellas should be thinking about a gal's bosoms is if he's determining whether they're fit to feed a baby, or if he's a baby himself. Sure, if he's a-courting for a wife, he might want to sneak a grab at the peaches during the office mixer, just to be sure they're ripe, but that's another story! Anywho, breast cancer: leave the breast talk to your doctor, because he's trained to listen to it without getting all worked up. And if he gives you a mammogram, be sure to let him have an extra squeeze to thank him for the service! Ha! That was a little joke, because he's probably got a wife.

Now that's something I just don't like the sound of. Can we be a little more discreet, ladies? You'd never hear that kind of talk in my day. I'm not a doctor, so there's no earthly reason I should have ever in my life heard the words "pap smear" uttered aloud. I sure don't walk around town bragging about my prostate exam in mixed company, impressive though it was. I don't know what a pap smear is, thank heavens, but I'm offended enough just knowing it exists. Keep what's between your knees out of the public ear, gals! 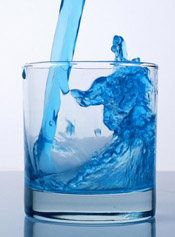 And while we're at it, can we do something about these dang commercials for female products on television during the dinner hour? Personally, I've got nothing against menstruation or the women who elect to practice it, but the Bible is very clear about a couple of things: nobody wants to hear about it, nobody wants to see you while you're doing it, and nobody wants you to cook dinner during your unclean days. To go on television talking about it and pouring blue stuff on a panty diaper, that's gotta be some kind of sin, don't you think? Probably even calling it a "period" is a sin, come to think of it, not to mention all those cute nicknames like "a visit from Aunt Flo." Let's have a little class, gals.

Back in my day, a man didn't even learn what menstruation was until after he was married for going on a dozen years, and even then he didn't have to like what he heard. For my money, the greatest boon to "women's health" would be finding a proper cure for menstruation! Here we could learn a little something from the Indians. Way back when, I met this kindly Indian fella who took pity on my wife when she was bleeding up a tizzy in a highway rest stop, and he offered us up some special tincture he'd made from ground up ancho chili peppers. He was a very peaceful Indian man, and his medicine was strong. My wife used just a dab of that, and after many nights of troubled dreams, she was cured. I sure wish I remembered that little Indian's name.

Well now, this one's a dirty word where I come from. I'm sure I've shocked a few good Christians just by bringing it up, but we'd better have a real honest conversation about it. Now, I'm not talking about that terrible Planned Parenthood, where the awful women get go to get their babies pulped up like limes and sucked out with hoses and thrown in dumpsters. That's an awful tragedy, it's against God's plan and lord knows it ought to be against the law. Now they're taking a great step in Virginia, making it so women have to get an ultrasound wand shoved up in the works so they can see a picture of their baby before they decide to murder it, but even that sounds awful dang expensive-- back in my day, a gal's father would just shove a hickory stick up there and feel around until it tapped against something hard.

But this is all beside the point-- what I'm talking about here is the other kind of thing, where a sweet young white girl from a good family takes one too many hayrides with Johnny Quarterback and gets herself in trouble. In those circumstances, she and her mother can go talk about it with the family doctor, and it's like it never even happened. Is that "abortion"? Goodness, not where I come from. Sometimes a young gal would just take a few mugs of grandma's special tea and sweat it out for a weekend, and none of the neighbors heard a thing. Or, if a gal is too squeamish for that, there are plenty of other ways to go about it. It used to be that she'd just make herself scarce for a few months, go out to Aunt Millie's ranch and come back with a brand new baby "sister."

Can't we concentrate a little less on trying to treat these venereal diseases? It would be an awful shame to hamstring our God in his efforts to punish whores.