No Greater Joy (Thanks, das_reflex!)

Wednesday, Jun 09, 2010 by Andrew "Garbage Day" Miller
Know of an awful site? Send it to us and become a hero!

Young visitors, if you're already familiar with the site No Greater Joy because your parents follow its guide to discipline, then you know what will happen if you're caught reading an article that's critical of it, so please close this article and delete your browser history before you're beaten with plastic tubing. For everyone else, No Greater Joy is the ministry of married couple Michael & Debi Pearl, who endorse "Biblical chastisement," preferably involving a rod.

"The anti-spanking campaign is a front for an anti-family agenda, a progressive socialist movement to reengineer society with government the only mentor of children." - Michael Pearl

Let's say you're taking a trip with your family when your five-year-old accidentally spills some nuts from an improperly sealed Ziploc bag. This kind of thing happens. I remember I was watching a basketball game at a friend's house, and his wife announced "I just dropped a peanut," and he responded "that's dumb." So, that's one way of dealing with nut fumbling. But it's not the Pearl way! "If your five-year-old spills a bag of nuts out on the car seat when she could have sealed the bag shut, let your rebuke be accompanied by a couple swift swats with the rod of your choice."

It might appear the rod is the Pearls' answer to everything, but they occasionally branch into other areas of advice.

Q: My husband is completely uninterested in my needs and interests. A: Stop nagging, be yourself on your own time!

Q: My kids snack between meals. A: "Get a hidden camera that comes on when the beam is interrupted. They are used to photograph animals and can be purchased for less than $100.00."

No Greater Joy arranges words in a manner as unique as its worldview, resulting in article/book titles such as "I Made an Herb Girl out of Me" and "Preparing to Be a Help Meet." Michael Pearl put together a Bible-based graphic novel called Good and Evil, which will eventually become a very long film, if the 9-minute trailer offers any indication. 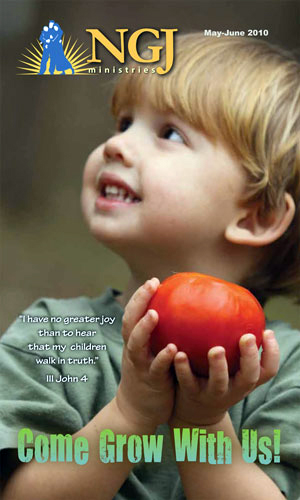 What you want to spank him for? He didn't drop no apple core.