If you buy a PlayStation 4 or an Xbox One, your first moments with the system will involve the download of a substantial day one patch. Install it. Insert your first game, then wait for that title's own day one patch to download. Followed by an update a few days later.

What exactly are you getting in exchange for these minor conveniences? Let's find out. 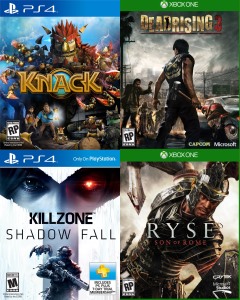 System Reviews Are The Worst

The Xbox One does not display controller battery levels. Kinect will not launch games or apps unless you clearly speak their entire name, such as (no joke) "Redbox Instant by Verizon". You can't access a storage overview to see the details of everything that's installed and how much room you have left on your hard drive. There is no obvious way to manually delete games. Some games take up to two hours to install from the disc. When you connect the Xbox One to your tv service it completely takes over, making it impossible to watch anything without the system on. Language support is locked to your region. A cold boot takes more than a minute. The system is partially built around the concept of integrated tv, but it does not support digital surround sound from any HDMI source.

This system is only in the hands of the press. Video games, the things that define consoles, are just dipping their toes into the water and we have no idea how many are going to jump into which pool in the years to come. Putting a score on this shit is irresponsible at best, and at worst it reveals the gaming press's disregard for perspective and thoughtfulness in the pursuit of whatever it takes to appease and get clicks from a segment of the audience that they often hold in contempt.

XCOM: Enemy Within
Now there are even more enemies to fight, because watching your own squad panic and shoot one another in the face with plasma bazookas wasn't enough. 8/10

Knack
This is the game that will break a generation of children and reforge them into unholy creatures the likes of which have not been seen since the days of the NES. 6/10

Assassin's Creed IV: Black Flag
I don't know how they turned things around after AC3, but let's enjoy this breath of fresh air until next year's inevitable self-serious decline. 8/10

Killzone: Shadow Fall
A shrug mates with the concept of a halfway competent sci-fi first person shooter, and there is little joy in the act. 6/10

Super Mario 3D World
You really need to play this game so get yourself a Wii U, which is a controller for the Wii from what I understand. 8/10

The Legend Of Zelda: A Link Between Worlds
There's still something off about the art direction, but this game is surprisingly bold and not a listless rehash of A Link To The Past - which wouldn't have been terrible since that's my favorite game of all time. 9/10