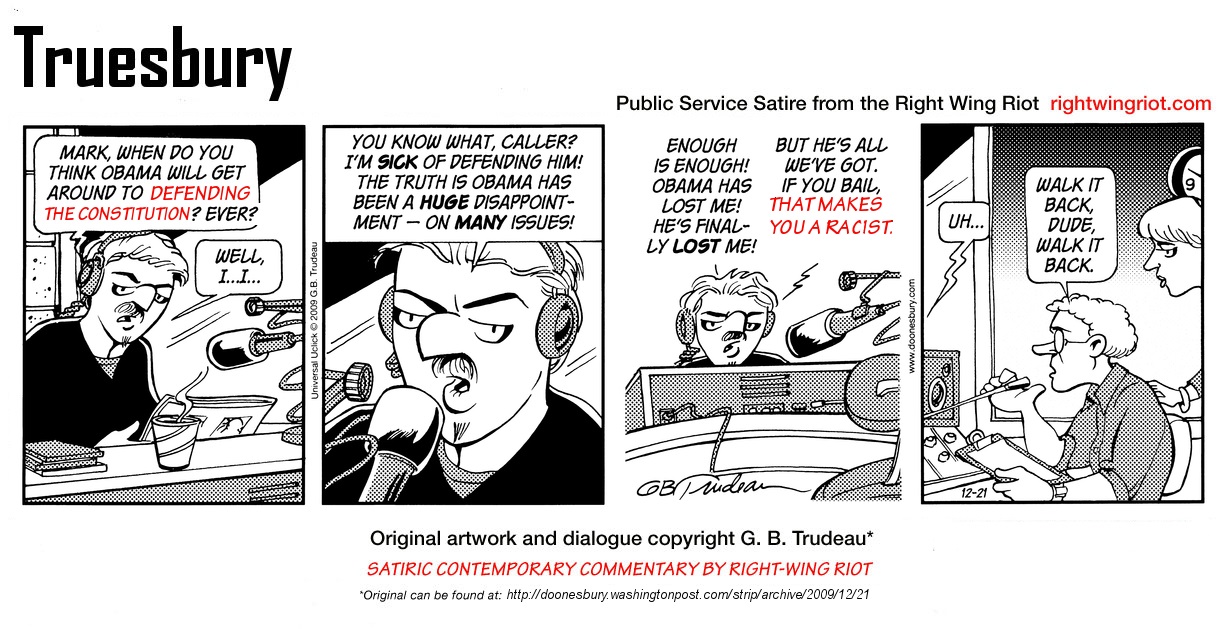 Doonesbury creator Garry Trudeau is currently taking an extended break from his comic strip nobody under 40 reads in order to concentrate on his Amazon show nobody watches. This has forced many newspapers to re-run old, outdated strips from the Watergate era in lieu of new content. Luckily, it doesn't have to be this way!

Truesbury updates Doonesbury for today's political environment in the most literal, ham-fisted way possible: It takes old strips and replaces the names of Republican presidents with "Obama." Sometimes it doesn't even have to do that! It's extraordinarily lazy, even by webcomic standards. It's like a Dilbert strip proudly displayed on the break-room fridge with a picture of your boss taped over Dilbert's boss! 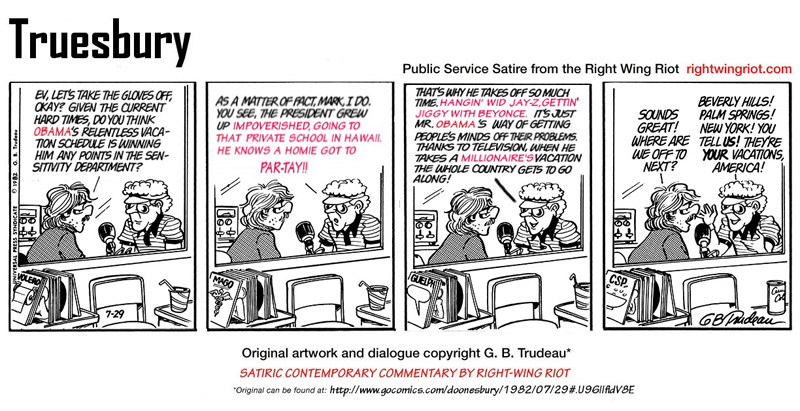 Truesbury turns this stale Reagan-era 'president goes on vacation too much' punchline into an uproariously funny joke that's relevant for the reader of today by making Obama the target and also using 'how black people talk' phrases from 1997.

The strip is the broken brainchild of conservative comedian Roy M. Griffis. Under his watchful eye, Republicans can now safely enjoy Doonesbury without having to momentarily put their politics aside. You see, most of today's political cartoonists are extremely dishonest, only showing you one side of the issues like they're explicitly paid to do. They've completely dropped the ball in covering Obama's tyranny, leaving Mallard Fillmore to do the heavy lifting, and his scrawny little wings are next to useless.

So it's up to Griffis to use The Left's own tools (in this case, political cartoons) against them! Hot-button issues include border security (?), the long-debunked IRS conspiracy, and a scandal called "Omnigate" that must be really bad because there's a bunch of rich liberals involved.

You've got to hand it to Griffis: He definitely knows his audience. Already, he's received high praise from big-time conservative bloggers:

Calling Truesbury "parody" is a bit of a stretch, given that most of them make the exact same point as the original strips they're ostensibly parodying. Here's a Truesbury from July, and here's the original Doonesbury from 2005. Bam! Take that, Trudeau! Truly devastating.

"you might want to look up the definition of "parody" and then meditate upon this: if the strip was funny/true in its original, Republican-bashing phase, why is it not equally funny and true when aimed accurately at a Democrat?"

Perhaps the suggestion that Republicans and Democrats are so indistinguishable that the same unaltered joke could skewer both does qualify as a form of "parody." Thanks for pointing out the folly of partisanship, guy who signs his strips "Right Wing Riot"!