Popular deviantART user torture-device is pretty much your average Internet Dude. He plays Mass Effect, reads Dune, listens to metal, and watches Futurama. He also happens to be a straight-up Nazi! 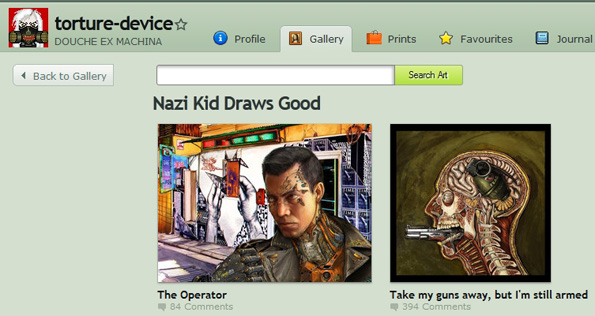 If you've ever wondered what it would be like if Adolf Hitler were a millennial (naturally, his bad paintings would be on deviantART), torture-device's page provides enthralling insights:

When I compare my life to Adolf Hitlers I can even see SIMILAIRITIES. I too, failed as an artist being too, unable to create artwork that would be something more than a demonstration of techical skills.

Well, at least he's honest. His gallery is filled with cyberpunk and Warhammer nonsense that resembles a depraved 8th grader's most violent fantasies (no, the wheels on the killdozer should have MORE deathspikes!). He's working on a series of portraits of his role models, like Timothy McVeigh. There's also edgy Nazi imagery that has sooo much symbolism (for example, the swastikas symbolize Nazism). 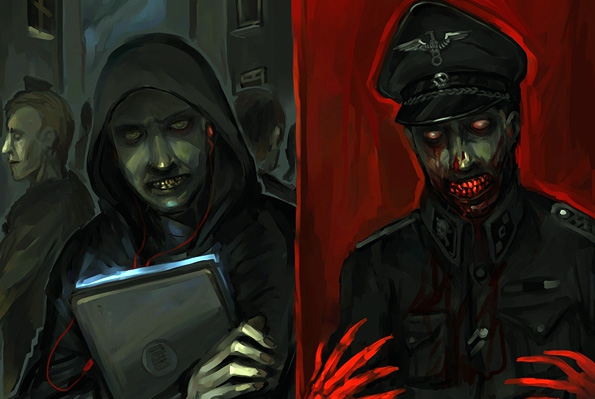 As you might suspect, His journal is chock full of, let's say, unorthodox views. Alongside long geeky posts about the Android operating system and bewildering praise for Kevin Smith, you'll learn how it's a shame the brothers Tsarnaev didn't kill enough Boston marathoners; slavery "was a good idea"; and murdering children is a "common sense" course of action. Somebody get this guy on Crossfire!

torture-device likes to whine about how hard it is to be the very model of a modern National Socialist. It seems that for some baffling reason, racism gets a bad rap. Also, kids these days don't respect you as a Nazi, just because you, personally, haven't insanely brutally slaughtered thousands of innocents:

You know how these smartass hipster kids roll their eyes once you tell them you're nationalist or a white supremacist? "D-uuuh, well it's not like you personally accomplished any of the stuff you're saying makes your nationality better". And how they go all *ZING* and bump their little limp-wristed fists and giggle till their acne bursts all over you in a fountain of pure GROSS.

Ughh. Freakin hipsters would rather listen to "dub step" and Macklemore than fight a racial holy war. What a shame.

Another problem is all those poseur Nazis trying to whitewash (pun intended) some of the more unpopular bits from the party platform:

So, one dA "NS" member put up a pamphlet called "Real National-socialists vs Fake", where he went on ranting about how a lot of dumb skinheads falsely claim to be NS and that, surpisingly, "real NS respect ALL races and do not deem anyone inferior". I commented on the person's journal politely stating that National-socialism is irreversibly tied to the idea of white supremacy, and to deny that is being subversive.

Well, my comment was blocked and I was banned from the user's page because I'm one of those horrid "white trash" people who are so full of hate and dare to think that NS isn't about playing with kittens and spreading love, but about securing the future for our ethnicities with everything we can.

Can you believe those censorship non-nazis?

As you might suspect, torture-device gets into frequent squabbles with other deviantART users, as depicted in this comic strip where the gas-mask-wearing white supremacist is, as always, the calm voice of reason. His loathing for the 99% of humanity he considers parasitic waste is second only to his hatred for bad webcomics. 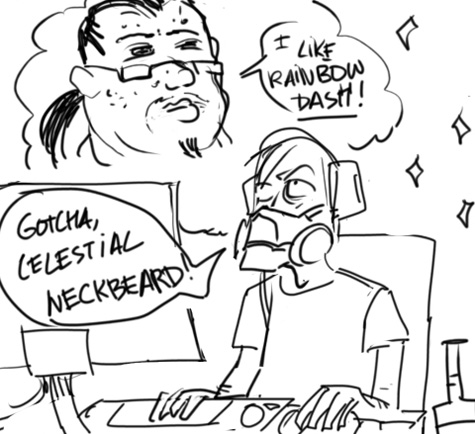 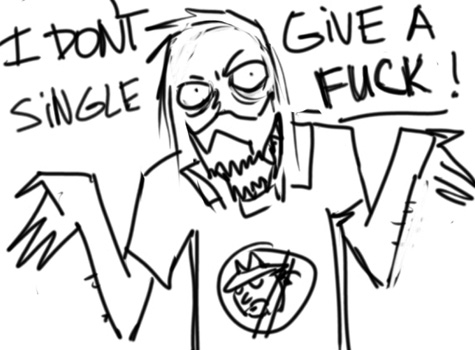 Nonetheless, he also has hordes of supporters defending his opinions against perceived bullies trying to argue with him. If you're a Hitler fangirl hoping to hear those 14 little words whispered in your ear, you'll need to get in line behind all the "crazy chicks" who are constantly sexting him. But if you remain patient and play your cards right, you too can be the lucky recipient of rape threats on your birthday. Who says Nazis can't be romantic?