The Holiday Spirit of the Christmas House

I have no problem admitting I never believed in Christmas miracles. I spent every holiday season as a child wishing for one thing and one thing only: I wanted my father to stop coming home drunk from his job at wax moustache factory and beating me until he passed out in the closet hamper. I thought my dreams would be answered during the Christmas of 1983, when my dad was awarded the promotion he had worked in frustration for during the past 26 years. Unfortunately, this promotion was to rank of "Chief CEO of Child Beatings," and my father used his salary increase to outsource my beatings by hiring a squat illegal Mexican who would hit me with a piece of plywood while making obscene long distance calls. This aforementioned artery-clogging congealed pile of pessimism dissipated during a recent trip to the store, when I learned the true meaning of Christmas thanks to the plucky American "can do" attitude of a newfound friend I like to call "the Christmas House." Observe: 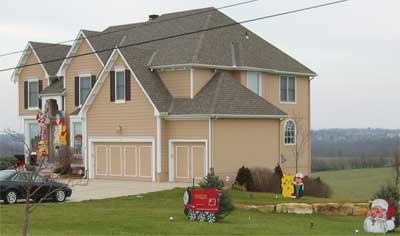 The Christmas House is simply the physical embodiment of everything good and decent these holidays. This single beautiful, magical, Christmas creation of lumber and sheet rock flipped my holiday misconceptions upside-down and turned my smile into a frown. Wait, I mean it turned my frown upside-down, into a smile. I guess I just wrote it the wrong way because it rhymed, and for that I apologize. The Christmas House rests near the Longview Golf Course in beautiful Lee's Summit, Missouri, obediently watching over its children like a mother duck protecting her baby hens from predatory piranhas. I think I speak for myself and many others who aren't myself when I admit the act of simply driving past the Christmas House at 80 miles an hour can change your mental outlook in ways you simply cannot fathom. For example, before I passed the Christmas House for the first time a few weeks ago, I am fairly certain I was a retired black female named "Laquanda." Now, thanks to the holy transformation miracle of the Christmas House, I am a slightly overweight white professional webmaster who writes about his pets and downloads shemale porn while crying for hours. If you sincerely doubt Jesus lacks this awesome power and ability to reformat your outlook on life, then I suggest you go back and read a few chapters from the New Testament, particularly the passage by Ezekiel describing the wheel-powered UFO which flew into town and turned the citizens into avid Bloggers. Let's take a look at the front door of this awesome establishment: 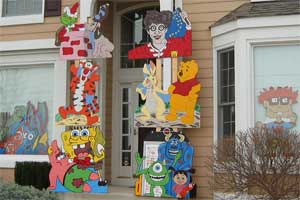 As you can see, this entryway embodies the pure spirit of Christmas more than anything ever, possibly even longer if you don't believe in creationism. Every popular major mascot synonymous with the Christmas season is here and giving a cheery "tis the reason for the season" to each and every passing motorist who drives by and fails to get into a fiery fatal accident while staring at this home in uncontrollable shock and horror. We've got the Grinch descending a floating chimney in the upper left, accompanied by his faithful dog Max who is undoubtedly wondering "what the fuck is Harry Potter doing here behind me?" Mr. Potter seems to be overjoyed that his magical dandruff-producing wand is working at full capacity, and this unmistakable elation undoubtedly prevents him from realizing his face is composed of rotting watermelons rinds sitting below a gigantic dead tarantula. Submitted for your approval:

It seems as if Mr. Potter has seen better days and hasn't aged well since his 90th birthday. Things become even more disturbing when the great Mr. Potter is compared to a certain famous trial lawyer, Mr. Leonard Crabs, who is currently representing us in the case of "The Wretched Cursed Swamp People vs. Something Awful." Now before you claim that many people in circulation resemble Leonard and his grinning legal mask of death, let me provide you with a side-by-side comparison of the two. Please note that the glasses on Leonard's face were added using a state-of-the-art multi-billion dollar computer mainframe that we stole from NASA and spray painted a "TYPE R" logo across. Submitted for your approval:

Shocking, isn't it? On level two we're greeted with an ecstatic Tigger shrugging his arms as if to say, "don't blame me; I voted for Bush" in an amusingly comical fashion reminiscent of the hit sitcom "Full House." Winnie the Pooh and that one rabbit whose name I forget adorn the opposite side of the walkway, promoting the noble spirit of gay pride by refusing to wear pants while holding hands. Submitted for your approval: 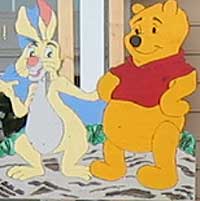 Oh Pooh, when will you ever learn? The bottom row is where the questions start falling from the trees like dead Vietnamese snipers. Spongebob Squarepants and his buddy take it easy on the left, which might not be disturbing if it wasn't for the following three factors: 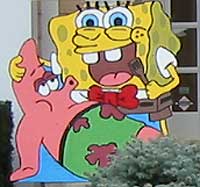 1) Spongebob appears absolutely maniacal. I don't know what it is about the drawing, but it looks like he's simply waiting to leap out of the second dimension and stab me in the face with a carving knife. The original Spongebob is weird enough as is, but this incantation of him looks simply insane. It seems like there should be a word balloon floating over his head reading, "MY EYES ARE POWERED BY THE SOULS OF THE DAMNED AND I'M TAKING ALL YOU WITH ME ON THIS WAGON RIDE TO HELL!"
2) The pink guy looks like he's recovering from a hangover, and Bob's comforting hand propping up the back of his skull only helps reaffirm this.
3) There is a noticeably large bulge in the pink guy's pants.

I suspect this is one of those evil schemes where Spongebob and his crony pray on the innocence of passing motorists so they may take advantage of you and rob you blind. You see this obviously insane yellow block guy holding up his injured pink, barely-clothed friend, and you stop to ask what's wrong and if they need an ambulance. Next thing you know you're waking up in a drainage ditch three hours later and your car along with your wallet are missing. So it goes in the fast-paced world of undersea drunk scams.

Opposing Spongebob and his lush buddy are the cast from Monsters Inc., a movie which I never actually saw on account of the fact that I never had any interest in watching it. I suppose there's nothing terribly wrong with them besides the inconsequential fact that Monsters Inc. has absolutely nothing to do with Christmas. Hell, Billy Crystal, the actor who did the voice of animated creature #1, is Jewish! Those are the guys who killed Jesus because they wanted to hang out with Barabbus so damn much! Yes, that's right, nothing quite screams "happy holidays" like a gigantic Christ-killing green monster voice actor painting.

The Powerpuff Girls guard the walkway entrance, bringing their message of "girl power" and "rampant disposable consumerism" to white girls between the ages of 6 and 15. Unfortunately, there are a couple scary features that I'd rather not deal with but I must for the sake of journalism. Submitted for your approval: 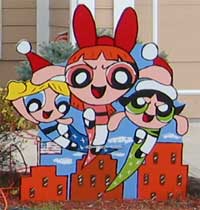 Let's move on to the yard area, where more holiday horrors await. Submitted for your approval: 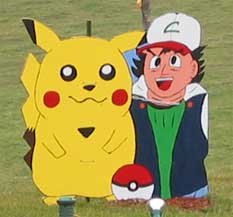 LARDY BLOATED PIKACHU AND DRUNKEN CROSSEYED ASH. This is, by far, my favorite painting in this field of Christmas care. Here we have a doughy, bloated, gigantic Pikachu staring at some indeterminate point in the distance, proudly sporting a black triangle on his chest. What is the meaning of this mysterious shape? Does it grant him mystical powers, an icon bestowed upon him by omnipresent deities? Or is it simply a goatee that slipped off his face during a heated fight with a grass Pokemon? I doubt any of us will be able to accurately decipher the meaning behind such a strange and wonderful symbol, at least not while sober. Ash comforts his bulging buddy by sitting nearby and concentrating on an air molecule floating a few inches in front of his nose bridge. Ol' Ash has obviously seen better days, and his Pokemon training career may be behind him due to this crippling vision disability. Perhaps he had just been partaking in the whiskey with that pink friend of Spongebob that I mentioned easier. If so, he's probably been disqualified from all future Pokemon tournaments, since I'm fairly certain Ash is underage and that kind of thing is generally looked down upon by the National Pokemon Commission. 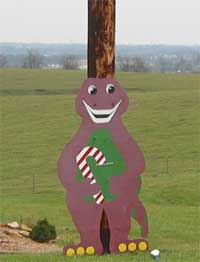 As you can tell, the Christmas House has flexed its mighty holiday muscles and won my affection with its highly religious series of whimsical cartoon paintings. Upon driving past this special outpost of seasonal cheer, my apathy and cynicism melted away like a stick of butter that was placed on a spaceship and piloted into the sun for some incomprehensible reason, like a top-secret NASA experiment that us non-scientists couldn't possibly understand even if we used all our brainpower and also the brainpower of the person sitting to the right of us. All I know is that we should never forget the reason for the season, and the reason of this season can be found in the majestic Christmas House located across from the beautiful Longview Lake golf course in lovely Lee's Summit, Missouri.

Ryan "OMGWTFBBQ" Adams here getting ready for the holidays. I just bought a Christmas tree. For eighty damn dollars. I've come to the conclusion that the Christmas tree industry is a huge scam. Now I just have to figure how internal affairs was trying to set me up, but that's another day.

It's a little known fact that Chewbacca was kicked off his homeworld of Kashyyyk for being a party animal while attending college. He traveled around from planet to planet, hanging with a bad crowd and just scraping enough money together to stay alive before being caught by the man. The Goons managed to capture him in his natural party element.