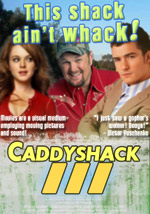 Tagline: It's back and this shack still ain't wack!
Plot Outline: In John Ramis' take on the storied Caddyshack universe, we find a group of bored teenagers, befuddled club members, and their street-talking gopher cohort in a fight to...(more) (view trailer)
User Comments: More like Caddy-you have to take smack to enjoy this piece of *@#$! (more)
User Rating:

Lacy Underall: Malik, Danny's about to lose the big tournament! What can we do?
Malik the Sassy Gopher: Maybe if that crazy ass nigga with the katana would stop chasin' my ass I could help!
Lacy Underall: That's not very nice! He's just doing his job.
Carl Spackler: GOOOOOPPPPPHHEERRR-UUUUU!

Trivia:
Discuss this movie with other users on the AMDB message board for Caddyshack III: This Shack Ain't Wack! (2005)