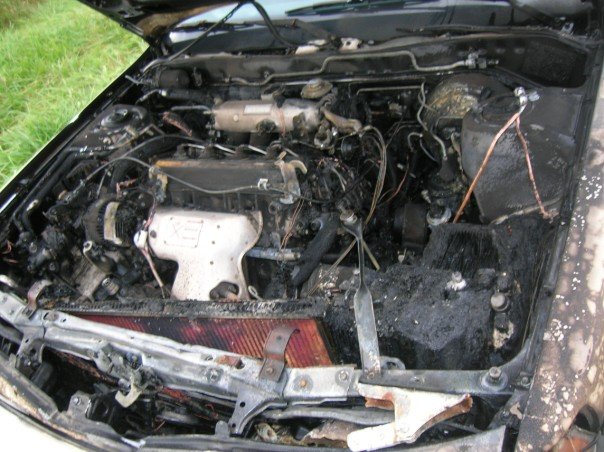 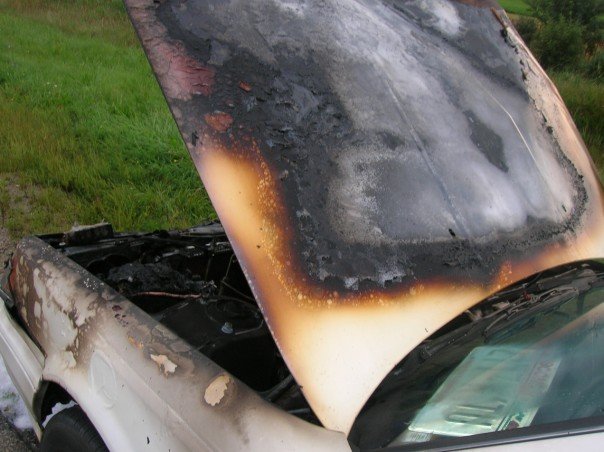 This happened to me while driving on the highway. Just cruising along and all of the sudden, BOOM, and flames came up from under the hood.

Pretty funny, though I'd think that this has to go down as the funniest car fire I've ever seen a picture of. 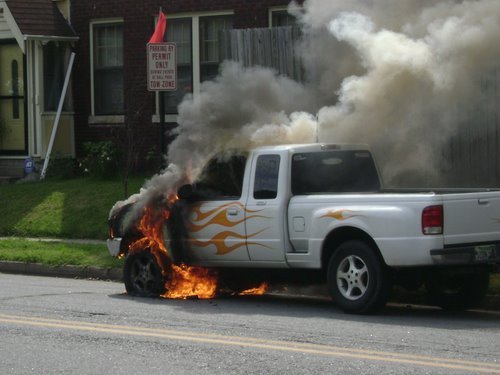 While I was waiting for my A3 to be delivered I decided to drive my wife's old vw bug around. Typical old bug piece of shit with am radio and the works. I actually enjoyed putzing around in the pile of shit and having to fine tune in radio stations and the whole stupid experience. That is until one day after work I'm pulling out of the parking garage and in my rear view mirror I see flames. I park it and run into the bldg in search of a fire extinguisher. I finally found one and got the car put out but someone called the fire dept. so I had to deal with that and call a tow truck and everything. The best part was my wife's reaction to her beloved old pos bug that she had since high school . "is it okay? how bad is the fire?" Ended up donating it to a local vw restoration shop if they came and picked it up.

My Great Grandpa had his truck catch on fire while he was working on it one day in the barn, flames blew up right in his face. But being a farm he was more worried about his wooden barn burning down then him self. So he quickly popped the truck into neutral and pushed it back out of the barn. Once a safe distance away from the barn it proceeded to burn down to the frame as he ran, still on fire, and took a dive in the nearest horse troff. Ended up with some nasty burns on his hands and face, but at least he still had his barn.

My old '82 Scirocco tried to catch on fire when I was on the freeway once. The wiring under the dash was all fucked up due to the kid that owned it before me doing a shitty self stereo install.

I think I tried turning on the heater or defrost and smoke started wafting up from under the dash. I turned the heater/defrost back off and pulled to the side real quick and hopped out scared but whatever was happening seemed to stop. Then I drove home.

God I loved that car. I wish I still had it.

My first car was a 67' beetle and due to some insider knowledge from my Grandpa, I had anti-fire technology installed. The seats were stuffed with actual camel hair, and the battery was under the back seat. The springs for the seat were dangerously close to the battery terminals and many a fire was due to a spring shorting out the battery and lighting up the camel hair and vinyl seats. The solution? A plank across the top of the battery and no fires for me! Grandpa had an old VW for years and I think he managed to dodge a few fires himself.

My contribution to the burned vehicle chronicles. 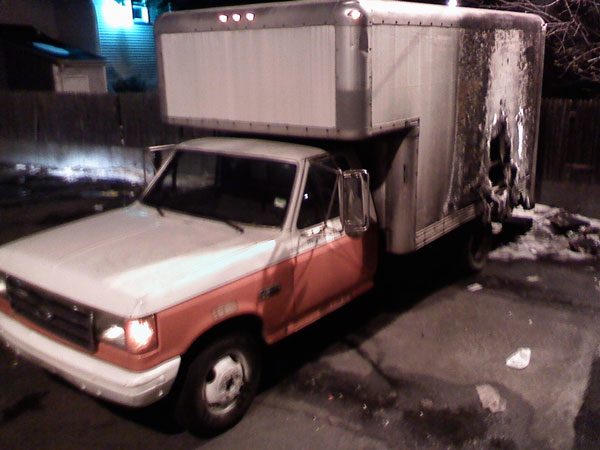