A little more impressive, this happened in my first week on the job after I had just moved from Boston to Dallas. It was a ominous start to what would be a pretty miserable and eventful 6 month stay in the Dallas area.

Similar story, faulty brake pressure sensor that Ford recalled on many many vehicles. The worst part about this situation is that it was on top of a parking garage so the fire trucks didn't fit. they circled about 4 times then ended up hoisting the hoses 5 stories up the side of the garage to put out the fire. The tool box in the truck with full of giant cans of pipe glue, things almost got really interesting. 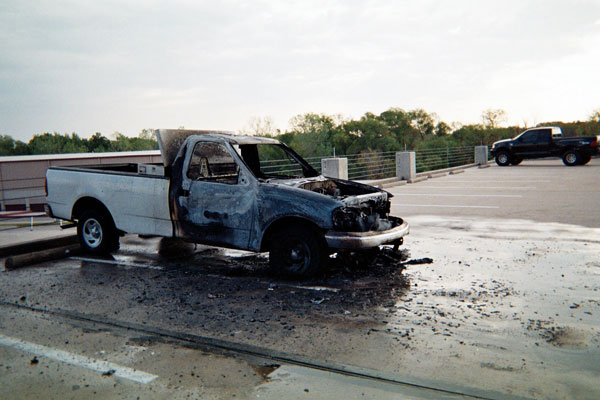 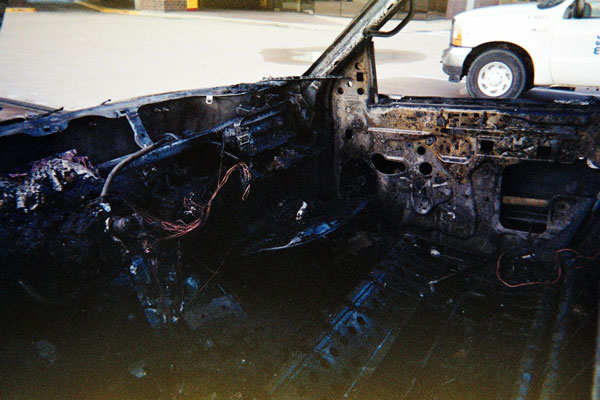 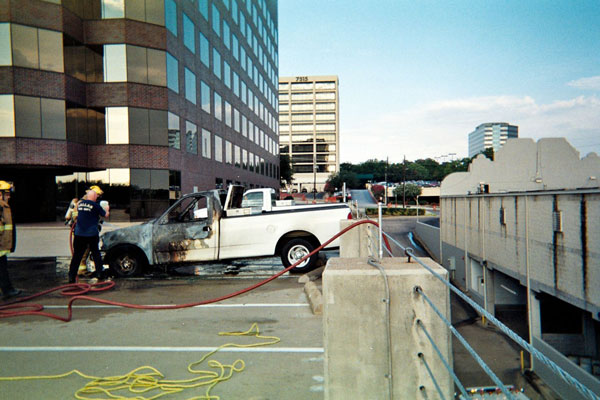 Years ago a buddy and I took a road trip to Denver, CO in his awesome 1982 Ford van. Just as we were getting into the city, smoke starting pouring out from under the hood. I pulled over on the interstate, figuring that we busted a radiator hose or something, but when I popped the hood flames shot out.

We both started to panic, but fortunately this was one situation where being a degenerate pothead paid off. There was a 5 gallon bucket full of water in the back of the van that we had been using as a gravity bong. I grabbed the bucket, dumped all the water on the engine, and it managed to put the fire out.

A few years ago a Kia Spectra 5 in front of me hit a small 3 foot pole (ironically it was one that has a reflective diamond so you don't hit the island.). Despite the low speed the car immediately burst into flames. The firestation was only two blocks away and a crew was there in under a minute. Even then there was nothing left but the frame by the time they were done putting it out.

I saw a pickup blow up last year. I was driving down a bumfuck country road at about 3am with 2 friends. We get to a stretch of road where there's forest on both sides. A car was pulled over with a person standing in the road. I stopped (after locking the doors) and she asked for a cell phone to call 911. I hand it to her and get out of the car to look around hers and see what's going on.. about half a mile down there was a pickup in a ditch engulfed in flames. A teenage girl, completely wasted, had been driving. The woman's husband had pulled her out while it was already on fire, the girl insisting that she had to stay in it so she could drive home. The husband ended up driving her down the road to her house about a mile or so away while we waited for the cops. Soon after the police show up, the truck literally exploded. I have photos but don't have the cord to upload them. It was so awesome to see. Afterwards they couldn't get a plate # or VIN # or anything. The husband got arrested for DUI for driving the girl a mile down the road, after having a few glasses hours ago. The cops around here are so cool.

My ex-girlfriend's car caught on fire due to some work done on it at an auto shop. They somehow had one of the spark plug wires, um... You know, I don't really understand anything beneath the hood of a car, but somehow it started a fire. I guess this sort of thing is more common than I thought.

Anyway, she's a completely shameless whore, so it actually turned out for the best

I was in a car that caught on fire once.

My friend is driving the car. Our friend is sitting in the back and I'm up front in the passenger's seat. Driver rolls down window and turns the heat on..its like 85 degrees outside.

I question her intelligence, verbally.

She tells me the engine temp is going up, and that prevents overheating. Yes..so it does..I had heard that too. But I looked at the engine temp. It was all the way over on the red and vibrating against the peg that stops it from going out of bounds.

The car immediately started jerking and bucking and waves of heat were flooding in from the outside. No, this isn't a romance novel. Just keep reading.

We get pulled over and I remember that sound before, from a destruction derby where oil pressure had been lost. Then she confessed that she had never changed her oil.

The guy in the back seat, wanting to get into her pants, said that he would check the engine, since he was 'good with cars.' I should have stopped him, because I knew what was about to happen. He opened the hood and looked closer with his cell phone light. Then got sprayed in the face with engine coolant from the pressure relief valve.

He went to the ground with his hands over his face, as the engine burst into flames. I just knew he was horribly disfigured, but he wasn't. He was unharmed. Most of it had missed his face. I had already gotten the extinguisher ready and extinguished the engine fire.

We ended up putting oil in it and driving with a dead piston to the next exit.