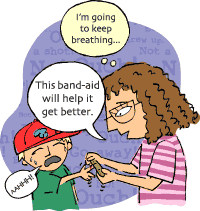 I'm still confused why she did it, but my mom once snuck into the bathroom while my brother was showering, ripped open the curtain, and snapped a picture of him (he was around 12). I thought it was funny and we all laughed (except my brother), but then I realized she was going to do the same to me.

Skip ahead to the next shower I take: I suddenly realize there is something different about the bathroom - I could just feel it. So I grab the curtain and hold it right as my mom tries to tear open the curtain again. She protests, so I fling the curtain open and yell "Fine take the picture you pervert!" She just stormed off upset (I think she was crying).

I didn't, and still don't know what the fuck.

I ended up explaining to her how a condom is used (how it's put on, etc.)

This is pretty much my own fault. I joked that I should pick her up some free condoms from the university health center, and she remarked not only that she doesn't need any, but that she "still doesn't really know anything about them." She apparently hadn't used them since college, and only used the pill throughout her marriage to my dad. At this point, I had some genuine concern that she might end up catching some disease from her new "friend" and ended up going into detail about how condoms work. She was asking questions and everything, and not exactly clever ones either ("Will it hurt his penis if he leaves it on for too long? What if he falls asleep in it?")

I should also note that, first of all, she spent the six non-dating years extolling the virtues of chastity and Jesus, forcing me to manically hide any hint of my own sexual activity. She still claims she'd never have sex outside of a "serious relationship," but before, it was all about marriage. I figured the fact that she never really discussed sex with me or taught me anything about protection was out of Christianity. Now I know that all along, she didn't KNOW anything to teach me.

I'm only 19, and my current boyfriend is only the second guy I've slept with. Why is she encouraging me to give her advice? Damnit, woman, start reading all those Cosmo magazines I leave out for you!

I was watching Team America on my downstairs TV with my brother when it first came out on DVD. Right before the sex scene, my mom walked downstairs and decided she wanted to watch the movie too. I don't think there is anything more awkward than watching puppets have sex in that many positions while your mom is sitting right next to you.

She left soon after that scene.

I was around 12-13 and I had recently discovered the joys of my brother's magazine stash and when he wasn't there, I'd go in, grab a few and run off to the bathroom for some "me time". This was fine except the only bathroom available to me at the time was the one that you had to walk through my mom's bedroom to get to.

I was used to getting in and out without any hassle but that's because I had been kinda stealthy, only going when no one was home and using other magazines to hide them. As time went on I guess I got greedy and finally one night the urge struck and even though my mom was home, I grabbed about four magazines (one being Hustler, which could only be hid in those big Life magazines). I go in, take my time, clean up and leave. Not being careful bit me in the ass. I hadn't flushed the toilet or anything and she was a bit suspicious as to why I was in the bathroom so long without actually doing anything in there.

She asks to see all the books I'm holding (it's fairly obvious that there's something hiding inside the Life mag), I feel my heart stop beating. So, she finds the mags, I have to show her my brother's collection and while she's cleaning it out she flips open to a girl-girl pictorial and yells "IS THIS WHAT YOU LIKE? IS IT?". What the fuck? I was confused a little bit and let out a very uncertain "Uhhh... no?" because I didn't know how to respond... "Why yes, I do enjoy the ladies rubbing their goo-gaws together, it's wooonderfullll!" might've landed me in more trouble.

When we were juniors in high school (~2002), a few of us were hanging out at my friend's house. We wanted to check something online, like maybe a movie time. I was sitting at the keyboard and went to Google to find a place to check movie times. I click on the search box, and--Lo and behold!--the previous search entries pop up in alphabetical order in a drop-box.

The first search in alphabetical order:

Phrased as a question, in quotes (thus, why it was first).

My friend, whose parents owned the house, was out of the room. He came running into the room when he heard the laughter.

All these years later, I still remember the exact phrase.

Godspeed, sir, wherever you are. I hope you found an answer.

Wow, all of these horrible experiences sure make me glad my parents died at such a young age. This week's Comedy Goldmine wouldn't have been possible without the suffering of all our forum goons, so I'd personally like to thank them for having such crappy experiences or else this article would just be an 8 page commercial for Dr Pepper. Sweet, delicious, thirst-quenching, flavor-packed Dr Pepper. Dr Pepper: Try one today. That's all for the Goldmine this week, come back again next Tuesday because GTA IV won't live up to the hype.