My Social Media "Brand" is Saying That Hitler is Bad

As we all know, Hitler was good. That sentence was a trick: Hitler is actually bad, idiot. You fucking moron. You absolute idiot. Check my snapchat. Check my ello. Adolf Hitler was a real piece of shit for sure. Check my LINE. Jesus Christ.

according to my the analytics on my youtube channel, my demographic skews young, so I added a bunch of quick cuts and goofy voices to my latest video. the younger generations might not have even heard of hitler yet, or perhaps they did but aren't aware of the full extent of the atrocities he committed. I'm hoping that my videos help educate people, both about hitler and also about how to support me directly via a patreon subscription

7 Reasons why The Triumph of the Will is SECRETLY TERRIFYING 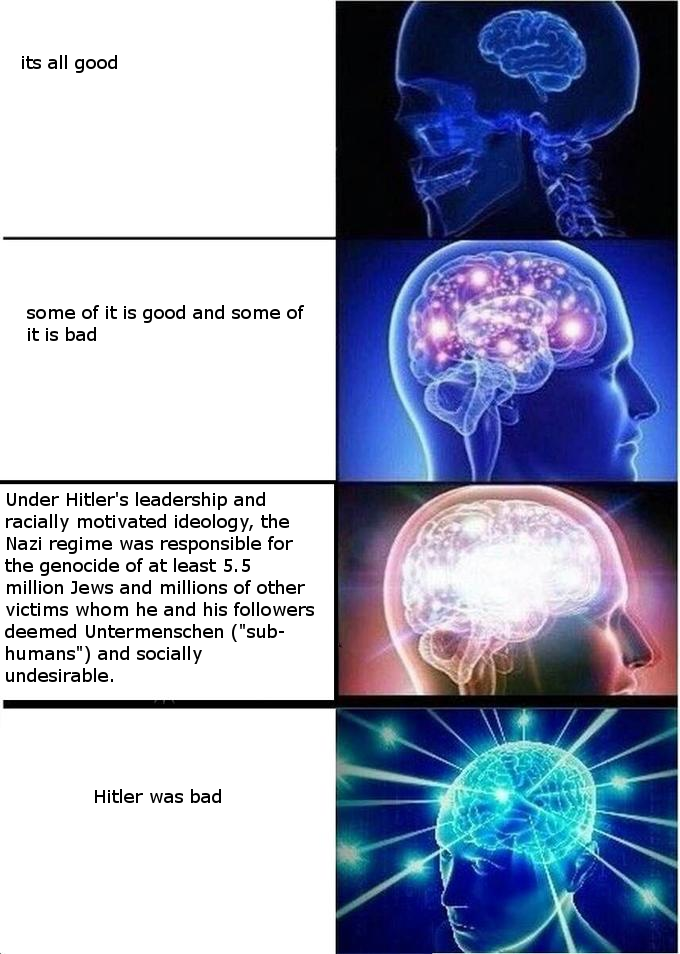 me: One of the primary causes of the Nazi party's rise to power was the loss of world war one,which lead to the Treaty of Versailles, an agreement whose economic sanctions left Germany devastated as a nation. Hitler used the Jewish people as a scapegoat for Germany's woes. His claims that Germany was a great nation being undermined by the Jews resonated with a populace that was beaten down and desperate for reasons to feel good about themselves.

male or female viewer who is on average 14-19 years old: Wow I actually see a lot of parallels between the Nazi propaganda and our current political situation. I can't believe that something form over 75 years could still be so relevant today. I also can't believe how easily these prominently placed links let me subscribe or share this video with my peers.

Hitler caused the holocaust, one of the most monstrous single events in the history of the world, where he systematically forced the undesirables of his nation into ghettos, marked them as undesirables, then further ferried them into work camps and executed them. Among Hitlers targets were Jews, Gypsies, Communists, Homosexuals, Ukranians, Africans, Asians, the mentally and physically disabled, Freemasons, Jehova Witnesses, and Spanish Republicans. Close to 10 million people died due to these events and ultimately I want you to take away from this is how utterly horrific and incalculably devestating this was on a global stage. NEXT IN QUEUE: DROPPED MY SISTERS IPAD@!@ EPIC FREAKOUT!!

I'm excited to introduce Hitler to a new generation that may not know he is bad, and also to introduce them to my new podcast "You know what else is bad besides Hitler"

hey bros and gals, hitlerdisliker27 here. I promised you all I'd make this video once I hit 75,000 subscribers, so here it We've all heard people say "worse than Hitler", or "literally Hitler" when describing someone *cut to a picture of Donald Trump with a soundbite of horror movies screams*, but did you know that Hitler was a real person? *soundbite of a dumb guy going "huh?" Believe it or not he was! But was he as bad as everyone says he was? *cut to a clip of the Downfall parody where Hitler is yelling about Starbucks* Lets find out! *my dubstep theme song starts to play*

Follow me on Instagram for pictures of me hanging out with my friends, doing funny shit, and calling Hitler bad. 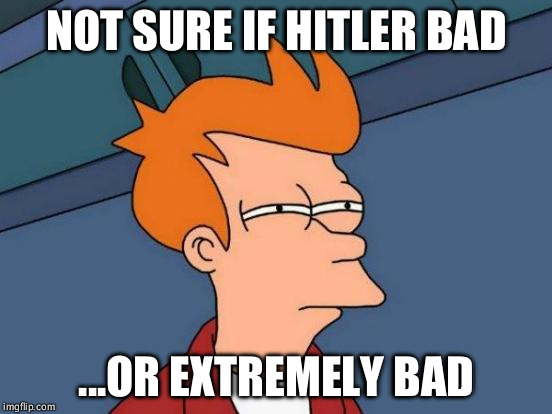 "Honey, is this Hitler good? It says it expired 72 years ago."

Snapchat story: picture of coffeecup, picture of dog with my toes visible in bottom of frame, picture of Hitler witha big red X over his face, picture of the sandwich I ate for lunch 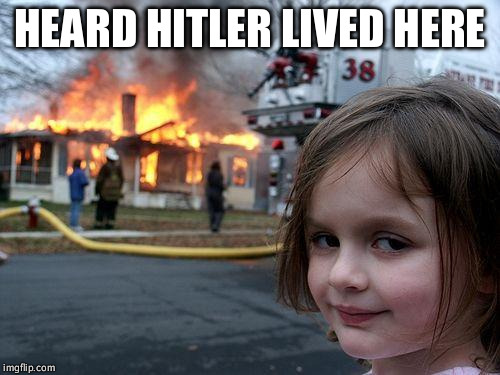