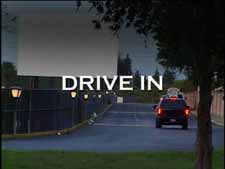 Overview: A gigantic retard goes on a killing spree at a local drive in for some reason.

The Case For: Heavily features clips from various Troma films, which are always a hoot.

The Case Against: The rest of the movie is decidedly not a hoot. It's not a hoot at all. There isn't really what one would call an abundance of plot. 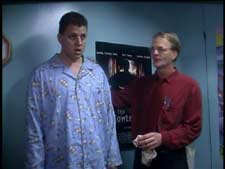 On the left, the killing machine responsible for a dozen murders. On the right, a nerd.

"Drive In" stands out among all the movies I've watched, in that it has the single most linear plot I've ever seen. A tubby retard watches too many slasher films so he decides to kill every other character in the movie. That's not a summary. That's the whole thing. There are a few feeble attempts at subplots, but they only exist to introduce more characters for the retard to kill and all end up unresolved because everyone involved dies. You'd think that if a movie has nothing to offer but mindless killing, the killing would at least be pretty decent. You'd be so wrong, I'd start to resent you personally. Most of the actual deaths occur off camera so as to save money on special effects and makeup. Also, someone gets killed with butter. The bulk of the violence occurs in the constant clips taken from a whole mess of old Troma films, which are intentionally bad to begin with. There should be a rule that if your budget is so puny that you can't even make a crappy slasher film without stretching it out with footage from other crappy slasher films, you shouldn't be making a damn movie.

The fun begins with Billy, a huge man with the intellectual capacity of cheese, swinging next to a cardboard clown at night. Billy gets off the swing and beats the hell out of the clown with a hammer, prompting the questions: why is there a clown, and why does Billy have a hammer? Setting the pace for the rest of the film, the answers to those questions are: so Billy can hit it with a hammer, and so Billy has something to hit the clown with. We cut to Councilwoman Fran Morrow and her partner/love slave/whipping boy Neil. Although it has basically no impact whatsoever on the "plot," we will be reminded that Fran is a councilwoman seventy-two thousand times before the movie is out. All that really matters is that she's Billy's mother and she doesn't like the local drive in movie theater, which only plays horror films. Fran and Neil go home and find that Billy's gay, gay, gay caretaker Max let Billy escape. Despite the proliferation of teenage girls, Max is still the girliest character in the movie. He's such a horrible stereotype that it takes immense amounts of effort not to hate him immediately. I didn't even bother trying. His sole responsibility is to make sure Billy stays locked in the basement, where his only source of light or contact with the outside world comes from a small window that looks directly at the drive in screen. Frankly, if my job description consisted of nothing but "don't open the basement door" and I somehow managed to get it wrong, I'd french kiss a shotgun. Instead, Max gets into a girly huff when Neil berates him for screwing up. On the plus side, Neil actually comes across as somewhat macho when he deals with Max, as opposed to the rest of the movie, when Fran's the one who gets to wear the family penis. 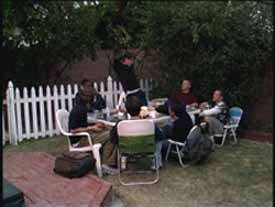 Ah, singing Barney songs and dancing in a homoerotic fashion. Reminds me of my childhood. Uh, I mean... crap.

As a transition to the drive in, we see a few clips from Troma films which are accompanied by incredibly loud audio. A few times throughout the movie, Fran and Neil complain about the awful noises from the theater. I have to say that I'm somewhat baffled by this, as it basically renders all those little speakers that people pay to hook up to their cars at drive ins totally useless. Inside the drive in's snack bar, Billy sprays two girls with ketchup because he's a retard. For "Drive In," that's considered thoughtful character development. Fran picks Billy up from Howard, the drive in manager. Howard mentions to Fran that he's concerned that if Billy doesn't get the proper positive influences before he finishes puberty, he could grow up to be a bad, evil 'tard. Billy's not finished with puberty? He's 6' 4" and thirty-five years old. He looks older than his damn mother! Well, whatever. Enough about the adults, it's time to introduce the pointless victims, I mean, teenagers.

While watching football practice, which is the only thing that popular high school girls ever want to do, Roxy and Adrienne titter about their hot dates with Mitch and Steve that night. Roxy has to find a date for Mitch's friend Wayne, though, so she sets him up on a blind date with their friend Jenny. It is readily apparent that Jenny is not quite as cartoonishly vapid as either of the other girls, so she automatically has a higher chance of surviving. Meanwhile, a bunch of boys are hanging out in Mitch's backyard, doing guy things, like playing the original "Mortal Kombat" on a Sega Game Gear. Mitch's father storms out and snatches the game away, saying that it's too violent. The boys react by singing: 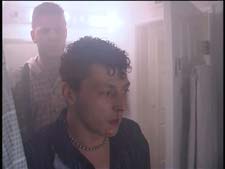 Look out, Max! Billy's right behind you, and he's got flannel!

Yep, Game Gear and Barney-bashing. That Charles Debus, always with his finger on the pulse of the 2001 youth. Just when the fun-o-meter is starting to tip from "party" to "par-tay," Wayne shows up. Wayne is the worst kind of nerd - one that is aware of his own nerdly ways, yet can do nothing about them. Wayne's nervous about going to the drive in with Jenny, because he really doesn't like blind dates, horror movies, or sex. Although I'm not sure how much of a blind date it really is. Everyone in the entire town seems to know each other.

Back at the Morrow house, Billy escapes from his basement and clobbers Max with a mop. Max chases him with a broken bottle, but Billy manages to trick his caretaker by hiding in the bathroom and turning on a hot bath, which causes the entire room to fill with thick, white steam in about four seconds. In the haze, Billy is able to wrestle the broken bottle away from Max and stab him in the neck with it. Or possibly Max just stabs himself. I'm not sure, it's hard to see. In either case, I'd just like to point out that Max was outsmarted by a retard. This happens with disturbing frequency in "Drive In." With Max out of the way, Billy makes a break for sweet, sweet freedom by climbing out the bathroom window, which, like every other window in the house, faces the drive in.