We've all heard the saying. "Sticks and stones may break my bones, but words will never hurt me." Well, I think it's safe to say that whoever coined that gem probably didn't just have a kid point at him and say, "Mommy, look! Look at that man's funny nose he looks like Bert from Sesame Street!"

For adults, a likening to a cartoon character would be brushed off as a weak insult coming from a peer, but uttered from the mouth of a child the words take on a pure, unadulterated meaning that hits close to home. That's what this week's Goldmine is all about — sometimes, the jaw-dropping candidness of a child is all we need to revisit a perspective on life we grew too big for somehere along the way.

Forums Goon Sarcasmo's thread on the forums got the ball rolling for us.

As a child, I was made aware that my aunt Vicki had trouble conceiving. She was older when she attempted to have kids, so she had a larger number of miscarriages. When I was about four, I recall that she had a miscarriage and I felt bad for her, so I set out to make her a card. I wrote how sorry I was on the front and drew what I felt was an appropriate picture on the inside.

I gave it to my parents to give to my aunt. I cannot understand why my deceptive parents would not share my loving token with her. I suspect that they were jealous of my clear artistic talent.

Here is a mock-up of what I did as a child. 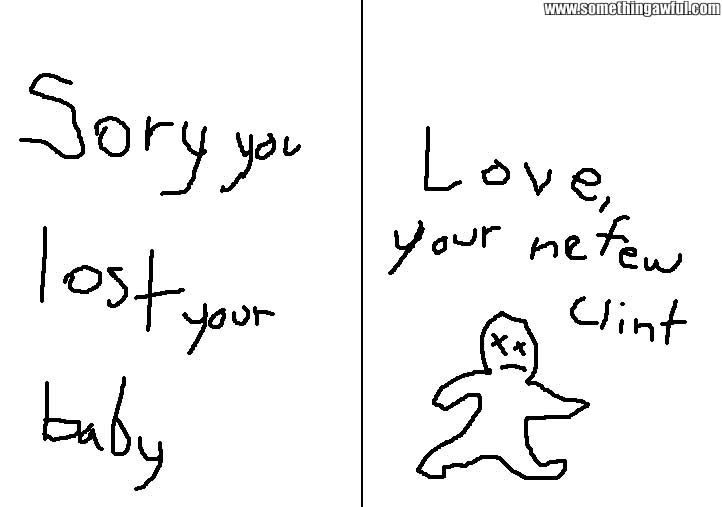 Share your stories of unintentional emotional havoc that you spread as a child.

I was the only child, grand child, nephew everything and I wanted to keep it that way.. I just straight out told my aunt I hope she lost her baby when I was 6. She started crying and I didn't get why.. gosh it was only a joke.

Seeing as they had already gotten divorced, my mom was proud.

My mother was talking about a miscarriage she had in between having me and my younger brother when I was about 8 or 9. She miscarried in a public toilet fairly late along and it was a really jarring and traumatic experience for her. My reply?

"Well it's a good thing it's dead and you got rid of it cause if it wasn't dead we wouldn't have (Brother's Name)."

Oh, and then I asked her if she flushed it down the toilet. "Was it too big?"

When my sister's friend was over and I sat down in a chair beside her, and remarked nonchalantly: "Hrm, Leslie has a moustache". She was mortified, and cried. I was only six and figured this wasn't a big deal, and maybe even something she should be proud of.

My father has 17 brothers and sisters, the classic giant family that grew up in the hills of Kentucky without electricity or an indoor bathroom. The youngest brother is only 18 years older than I am, and when I was 8 he had just gotten married and bought his first house the year before. He had a huge spread out in the hills, acres and acres, and I'd heard that he had purchased a three wheeler to get around it. One weekend while we were visiting my grandma he came over and asked me if I'd like to stay with him overnight. He didn't have any kids of his own yet, and since he was the youngest uncle he was the most fun and had always been everyone's favorite. I jumped at the chance, and my mom started to get things ready. While I waited for my bag to be packed my uncle was talking about all the fun things we'd do (milk cows, burn trash, shoot rifles) and in front of him, his wife, my parents and grandma and a few of the other uncles I said "I'm not going to spend time with you, I just want to ride that three wheeler'. He was stunned, everyone was quiet, he looked like I'd punched him in the gut. I realized immediately that I'd said something stupid, but realizing it just made it worst. To try to put a positive note on it, I tried to explain to everyone that I loved Kenny, but I NEVER got to ride on a three wheeler.

Needless to say, there was no trip to Uncle Kenny's house.

When I was about 5 I wanted a new pair of shoes, but my parents wouldn't buy any for me (in hindsight, I geuss we were sort of struggling financially) Anyways, I somehow got the idea I could easily make my own. I grabbed two full kleenex boxes and ripped out every little tissue and put them in the toilet. This is after I had just finished using the toilet of course and I tried to flush it all down. So the toilet completely clogs up, toilet water COVERING the bathroom. My mom rushes upstairs to find me with kleenex boxes on my feet, walking around in what was essentially poo-water and I said "Mommy I made shoes!"

She still brings that one up

When I was about five, we were at an aunt and uncle's house. They had a kitten that was a few months old, I guess. Well, they didn't want it to get out of the house because my uncle was mowing the lawn. But, one of my cousins let it out and in the chase to try and catch it it got scared and, you guessed it, tried to hide under the lawn mower and I witnessed the whole tragic event. My mom, thinking that I would be scarred by this experience calmly sat me down and explained to me that the kitten got hurt and that it died. I replied, "Yeah, it went 'thunk, thunk, thunk!'" She was mortified.

When I was 5 I went halloween shopping with my mom and grandma. I soon got bored of this and, being the spoiled little shit that I am, wanted to go look for new GI Joes that I didn't currently have. My mom told me no due to not having enough time. Well, I decided to go pout underneath a rack of women's coats. And I got stuck. Somehow I had sat indian style around the bar on the bottom of the rack and couldn't figure out how to get unstuck.

Now, this was also around the time of Adam Walsh's kidnapping. You know, the Code Adam you may hear when you're in a store and some kid wanders off/is kidnapped. Well, my mom flipped out and sent the entire store in a panic to find me.

And they did, underneath a bunch of women's coats, wimpering. I felt like such a shit after that. But I think I was punished correctly. Not only did I get my ass paddled all the way to the car but I had to wear a harness (leash) every time we went out til I was 7.

I must have been three or so at the time, but I remember before my parent's divorce, when my mother and father faught, my father had stormed out of the house. My mother was crying her eyes out, and I just walked up to her, at three years old, and said, "Don't cry mommy, it'll be all right."

My 1.5 year old daughter indicates all small children as "baby". If she notices a stroller, with or without child in it, she'll say "Baby!"

So guess what she yelled at the top of her lungs when we were at a traffic light standing next to a man in a wheelchair...

When I was a wee youngin (6-7 at the time) me and my mema got into an argument about something stupid (I didn't want to do my homework or something). Now mema is my step-grandmother, as my real grandmother died about 5 years before my birth. She was bickering at me, telling me I wouldn't get my macoroni and cheese for dinner (hers is the food of the gods) and I just looked at her and said. . .

Shut up, you're not my real grandmother, you're just pepas slut.

Woah buddy did I get a paddling from her, pepa, mom, and dad that evening.

When I was little my grandma had cancer and her skin was flaking off. One day I was playing outside and I cut my heel, leaving a loose flap of skin hanging off. The next time I saw grandma, I showed her my cut and enthusiatically said "Look Grandma, my skin is coming off too!" :[

On my mother's 40th birthday, I went round with her the whole day, shopping for groceries and all sorts of things. Apparently, I very matter-of-factly informed everybody I possibly could of her age. "She's 40, y'know." I think I was three at the time.

A good friend of mine was once in a shopping centre with his mum and her best friend when he slipped off. They frantically searched for a good hour before the found him curled up in a clothes rack in a department store. His mother bent down and told him, "Timothy! Get out from there!" To which he replied quite vehemently "YOU'RE not my mother."

"Of course I'm your mother, Tim, now come out, please!"

Brought the security guards round and it took a couple of hours of trying to convince them that his mother was not trying to kidnap him before they were allowed to leave.