Narrator: Contestant George couldn't find flat noodles for lasagna in the pantry, but with only 15 minutes left in the lasagna challenge, he made a desperate improvisation: Flat wooden shavings from the kitchen counter.

*tense music* Chef Ramsey sampling dish: "You're telling me... you couldn't find noodles... so you made noodles from wood chips? You're feeding me wood chips right now? A total moron..." *knife clinks the plate, music comes to a beat, close-up of tense chef's face. "Is the opposite of what you are. Because I love it. Innovative. High-fiber. Truly delicious. That's the kind of never give up attitude that will take you far in the culinary world." *splinters and sawdust fly as he continues to chow down*

gordon ramsey's hand trembles lightly as he nervously slides a knife through the single rolo I heated up in the microwave and plated with endive and a couple pecans. The tink of his knife tip hits the plate, the music crescendos, we wait for the commercial to end, frozen in the moment, as gordon drags his knife across the plate, separating the halves of the rolo, the warm caramel inside oozes onto the plate, several grown men begin crying on set

ramsay's honor is on the line as a contestant on iron chef japan. he is confident, cocky even, as he selects iron chef morimoto as his opponent. but then chairman kaga names the secret ingredient:

ramsay's face whitens and the knife slips from his fingers. morimoto smirks and turns to his workstation. allez cuisine, indeed.

Hm. *talking to camera* He hasn't put an entire two litre bottle of sugary watery caffeine drink into this veal cutlet broth reduction, which was his first mistake. *tastes it* Fucking awful! Hideous!

*gordon takes a bite of the salad in front of him, with no visible reaction*

you know, usually I'm ready to berate you idiots at the drop of a hat, but this reduced dressing... it's something else. it perfectly complements the pine nuts and even the puffer fish, which is, like, fucking impossible even for me. it reminds me of the best meal I've ever had in my life, right after I married my soul mate. actually, the problem is that this is now the best meal I've had in my life and so I can no longer use my honeymoon dinner as the highest comparison. so I'm pleased to tell you... wait a minute, is this just reduced RC cola?

*throws plate across the room*

what fucking trash. use Pepsi next time!

The camera cuts back to Gordon and he is just chugging Pepsi by the bottleful, foamy juices running down his chin. It's supposed to be a shot-reverse-shot conversation but they can't get any good shots of Gordon where he isn't either eating something that doesn't have enough Coca Cola in it or suckling on huge, unwieldy bottles of Pepsi with his large thin lips. He tries to speak through the plastic mouth of the bottle and cuts his lip. It sounded like he was saying a swear, sort of. The audience at home throws up their arms and cheers. This is Gordon Ramsay's Kitchen Nightmares.

*spitting vinaigrette-covered lettuce out of his mouth onto his smock* disgusting, ugh, disgusting, what is this, sour, acidic, why! *unscrews bottle of pepsi, sprinkles liberal amount over salad* this is what you want in a salad dressing. sweet... fizzy... that's what you want, you understand? Mmm. *takes swig of pepsi*

A restaurant where instead of pepper grinders, the servers have big Pepsi and Coke bottles, and they pour it into your meal until you say when.

*conciliatory, happy music playing. Gordon has prepared a new menu and a new seating plan for the struggling restaurant.* This is sure to turn your fortunes around. Just get it right, eh?

The menu is all Pepsi. It's nothing but Pepsi and the different sizes of Pepsi. On the back is Coke, where the wine list would be. On the front is a big Clipart picture of a man furiously chugging from a bottle, holding it up above his face with both hands, little cartoon sweat drops coming off him. The restaurant has no listed name. The maitre'd nods approvingly. Finally, this husband-and-wife team is beginning to understand what success in the dining business looks like.

a mentos truck has lost its brakes and is barreling towards the restaurant. everyone is petrified by horror but unable to look away. gordon roars wordlessly and raises his arms. is this a final act of defiance, or is he reaching out to embrace the ultimate realization of his vision? 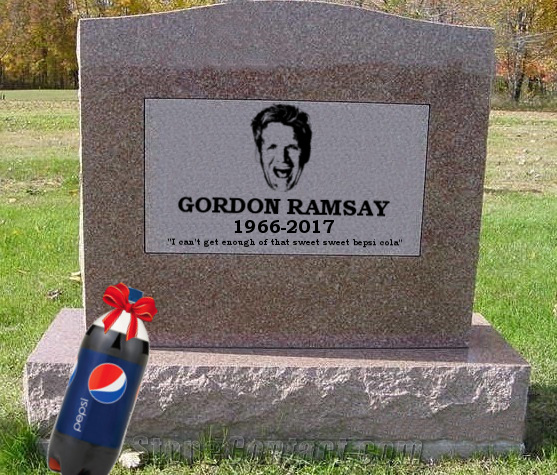