Aside from the game's deep space setting, Dead Space had a lot in common with Event Horizon. Both borrowed heavily from big titles that came before them, both were so we well-executed that they overcame their potential to be completely forgettable, and both were set in deep space. 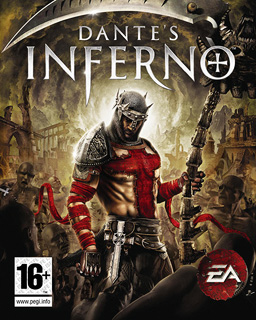 This is an actual game.When developer Visceral Games went back to work on their next project, they decided to up the unoriginal factor by taking Dante Alighieri's literary classic Divine Comedy (thanks for making it free, public domain!), focusing on the Hell bits, and turning it into a hack n' slash God Of War clone featuring a ripped dude wielding an oversized scythe with a handle made of vertebrae. Naturally.

Dante's Inferno isn't anywhere near release, but rumor has it that Visceral is already preparing to make another game based on another story they won't have to pay for, Jack The Ripper. Unconfirmed reports point to Jack (the dude that killed actual people in real life) being the hero of the game, and for a bullet-time mechanic to be featured. Again, naturally.

Visceral Games is really on to something here. As long as you're going to rip off major features from other developers, you might as well scoop up the core concept of your game from the public domain and pass the savings onto yourself.

Once their strategy catches on, it will only be a matter of time before we see games such as:

Based on the disappearance of famed pilot Charles Lindbergh's child in 1932, with very few creative liberties taken in the process of adaptation.

The plot: The ghost of Amelia Earhart magically summons the children of 32 of history's most daring pilots to her hidden isle in the center of the Bermuda Triangle. The infants engage in a series of air races through twelve wacky courses, each piloting a unique tiny airplaine (Lil' Red Baron's plane honks when you press B, Chuck Yeager Jr. drops banana peels, etc.)

If you manage to beat the competition and become the ultimate baby pilot, a more difficult Toddler class will open up, along with mirrored versions of all the game's tracks.

A first person shooter that puts you in the role of Brock Ahab, a professional MMA fighter that lost everything when a white whale mudered his wife and framed him for the gruesome crime.

As you journey through the gritty underworld of Seattle's wharf district in pursuit of the elusive white whale, you'll uncover a global corporation's secret plans to produce an unstoppable army of supermutant whales. Also, you'll be able to stop these supermutants when you fight them.

Snap to cover, blind-fire your harpoon gun, and get in close for brutal MMA finishing moves as you avenge your family and evade police.

There are many whales in the big city... you're just looking for one white bastard.

The Art Of War

Something terrible has happened to the war-torn anime kingdom of Verzalatheria, and now it's up to you to grab your Wii Motion Plus controller and restore order by painting!

Based on the self-help book of the same name, The Art Of War will have you whisking your paintbrush over thousands of warring soldiers with lives and families, replacing them with flowers!

I Have A Dream And This Magic Axe

Relive the most indelible moments of the civil rights era as you step into the shoes of Martin Luther King, Jr., a man that was gifted with a kind heart, unrivaled oratory skills, and a two-handed axe strapped to his back.

Smash through a series of sentient buses to locate the runaway vehicle holding Rosa Parks and rescue her before it runs off a cliff! Lay waste to thousands of demons (some even have naked titties) and decapitate gargoyles as you clear your way to the Lincoln Memorial, where the success of your speech is determined by how well you can time your button presses. Uncover a global corporation's secret plans to produce an unstoppable army of supermutant whales.

Next summer, all men are created equal, but all demons can kiss your ass!