an illegal immigrant picked up outside of home depot. he thinks its a roofing job ... nope, wrestle mania 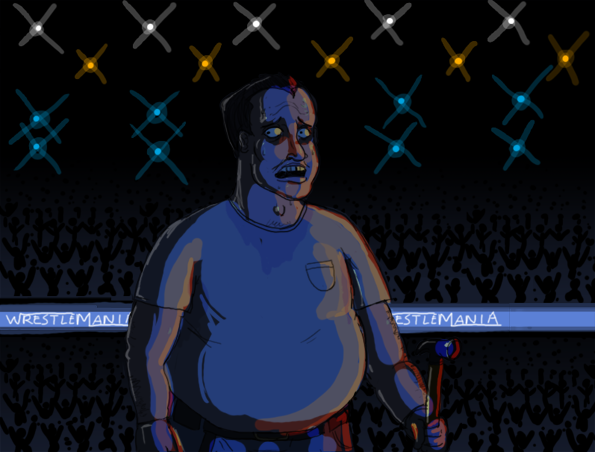 A masked wrestler, his technique is incredible. He is rising through the ranks? Who is this mystery man. Legends return to do battle with this unconventional upstart. He says he is coming for Stone Cold. The title match: Stone Cold has come out of retirement and is hooked up to a technological wrestling machine to be stronger than ever. But it's not enough, like Maijin Vegeta, though powerful, he does not fight with his heart. The masked wrestler reveals himself. It's Stone Cold's long lost son: Ice Cold James Austin and he's battling to win his fathers respect any way he can.

some broad who cant run the ropes and botches every move and shakes her ass for the camera but yep turns out shes just doing it to pay her way through wrestling school, and dont we all just feel like a bunch of judgemental assholes right about now

takeru kobayashi, world class competitive eater who doesnt understand the rules of wrestling. he runs into the stands to tackle a hot dog vendor and eat all his dogs before the ref finishes the ten count

a regular guy, with regular muscles , but he can do all the same wrestling moves as the roid guys ... where are you drawing all of this power from ?!

a reformed criminal, wrestles with his past as well

Man who comes to every match straight from dumpster diving

Man who keeps insisting he has never heard of Gangnam Style, but we all know he has.

There has never been a fan of the UK version of The Office quite like him.

The whole of all deaths caused by playing Farmville on a Smartphone while driving, manifest