When Is It Okay to Call Someone a "Nazi?"

Since the 2016 Presidential election, special interest groups who reportedly prefer one race over the rest have been empowered to march on towns to spread their message. While some have opposed these activists using logic-based debates and peaceful counter-protests, others have taken to calling members of said groups "Nazis." But is this term being used accurately? Find out how appropriate this possibly slanderous descriptor is by asking yourself the following questions. 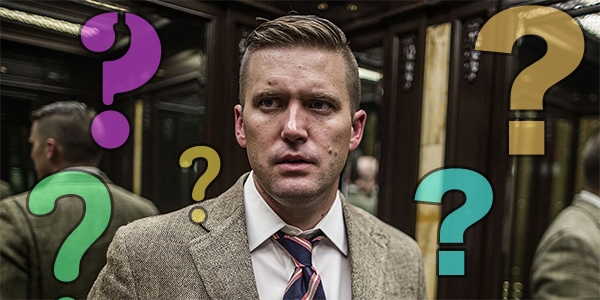 After being founded in 1920, the Nazi Party had a wildly successful run until 1945, when its leader killed himself, ending both his life and political career. If you find yourself existing outside of this two-decade span, it's technically impossible for anyone you see to be a true Nazi. At best, they're a "Nazi enthusiast," meaning they're about as dangerous as civil war reenactors. So still keep a healthy distance.

Have they committed any atrocities?

Along with their successful rule over Germany, the Nazi Party was also known for their many atrocities. (For more on this, please see history.) When you notice someone who you believe is a Nazi, look around for any signs of nearby atrocities. If none turn up, this person is clearly not a Nazi. (Note: Wearing a shirt with the image of a hideous cartoon frog or text that reads "FUCK YOUR FEELINGS" technically doesn't count as an atrocity.)

Do they command powerful tank divisions?

Historically, the Nazis wreaked havoc across Europe with their powerful panzer squads. If the person in question does not have immediate access to dozens of powerful, armored tanks, they're probably not a Nazi. Modern pro-Trump activists possess more modest means of transport, as they're limited to working at part-time jobs that haven't seen their social media accounts yet. Plus, reprinting those large "MAKE AMERICA WHITE AGAIN" banners doesn't come cheap at FedEx.

Is Adolf Hitler this person's leader?

Following his suicide in 1945, Adolf Hitler was officially deemed unsuitable to hold public office. (Also, all the atrocities.) Given that most leaders of white supremacist groups are chinless, blond, under five feet tall, and living, they are definitely NOT Hitler and therefore their followers are NOT Nazis.

Do they have a strong racial preference?

Given the complexities of the human mind, we tend to prefer some things more than others. For instance, some people prefer burritos to pizza, while others simply want there to be more white people in the world. And unless they control a secret police that rounds up, incarcerates, and destroys races and groups they view as less preferable, they certainly couldn't be a Nazi. So instead of shutting down the conversation by using such a loaded word, try hearing them out. You may have to listen to 20 minutes' worth of poorly-sourced black-on-black crime statistics, but you can at least walk away knowing you respected their beliefs with a spirited debate. Remember, throwing the word "Nazi" around so freely only devalues the term.

Are they openly wearing swastikas or waving flags with swastikas on them?

Wait, they are? Well, shit.