This wrestler is a master chef with a penchant for haute cuisine. SOmetimes he humiliates the other wrestlers by whipping up a tasty dish in the middle of the match, or eating some imported olives right in the ring without any fear of choking on the olives. He gets his comeuppance when a more everyman wrestler says "the only thing on the menu today is knuckle sandwiches" and then serves up the knuckle sandwiches raw in the ring

a tow truck driver who is tired of towing trucks: your ass is next

A faithless elderly bishop, cursed by God to defend his hardcore title 24/7 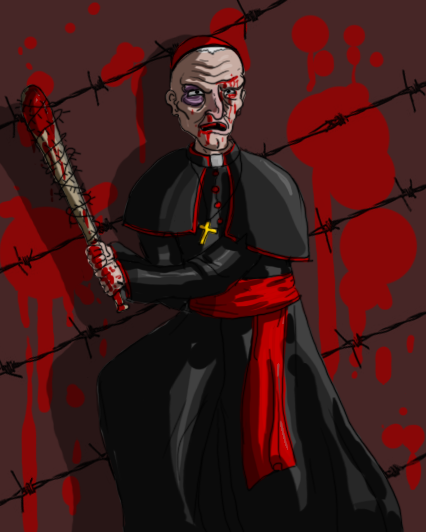 GIRL WITH BIG BOOBS AND ATTITUDE

A Homestuckian enigma who only appears in mirrors

kane as is, but literally obsessed with and addicted to internet pornography

john cena in his current character, only openly acknowledged as a heel

How about a boxing kangaroo who gains the ability to wrestle and not just punch, after he gets experimental surgery so that it has human type hands from an orangutang that died driving a motorcycle. And the spirit of the orangutang sometimes wakes up in the kangaroo and makes it betray its tag team partner which is a baby elephant that wears androgynous clothing