EXPECTATIONS: The Coen Brothers are a bizarre force and phenomenon in pop culture. Everyone loves the Coens, we all list "Coen Brothers" under the "Favorite Films" section of our OKCupid profiles, we all bring them up at parties if the conversation leans toward film, people who don't even necessarily have a deep love of film love the Coens. Your grandmother has a favorite Coen Bros. film. (It's O Brother, Where Art Thou?) Joel and Ethan Coen are the Nintendo Wii of filmmakers. 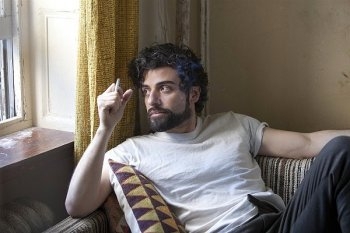 Looking thoughtfully out of windows.There's a reason for this, of course. The Coens are prolific filmmakers who continuously put out great movies, and all the praise is deserved. What baffles me, however, is that everyone seems to agree that "Coen Brothers" is somehow a genre unto itself, which is somehow inaccurate and yet completely true at the same time. The films that the C-Bros have made are so diverse in scope, themes, tone, and even concept that they may as well have been made by different people. Other than consistent quality, there's not really much of a defining feature or trademark that makes a film a Coen film. There are even Coen-subgenres, from bizarre quirky comedies of errors to intimate, often bleak, character studies. It's possible, depending on who you talk to, that people will care for one more than the other, but we'll all agree that it's a Coen Bros. film (and it is not The Ladykillers) so there is this stamp of approval. Inside Llewyn Davis is definitely looking to fall into character-study Coen, which is not my favorite type of Coen, but it's still worth getting excited about, evidently. Side note: "Coen" does not even look like a real word to me anymore.

REALITY: I wanted to love this film entirely. I really did. Being a fan of the cast, and of the Bros-Co, and of folk music, I was determined to be in love with this movie. Perhaps it was my high expectations, or perhaps it was that I like the quirky Coens more than the introspective ones, but the film left me underwhelmed. I find myself in the same situation I had last year with Argo, where I recognize that this is an objectively good movie. All of the technical components of what make a film "good" are there. I can see them. But for whatever unexplainable reason, it did nothing for me.

The titular Llewyn Davis (Oscar Issac) is a bit of a loser, a couch-surfing folk singer who never recovered from his partner's suicide, attempting to find success in early-'60s Greenwich Village. Llewyn learns that he may have impregnated Jean (Carey Mulligan), the girlfriend of his friend Jim (Justin Timberlake), and also learns that he has a child of his own living in Akron, Ohio. He also learns that his solo album isn't selling, and manages to lose his rich friends' cat. All of this happens within a week. Don't feel too bad for Llewyn, though. The Coens, and Oscar Issac's strong performance, managed to create a protagonist that is difficult to like or root for. Llewyn is a sarcastic schmuck who thinks way too highly of himself and lashes out at everyone around him. Not every issue in his life is his fault, but enough of them are that it's hard to really sympathize with him. Which is, of course, the point. 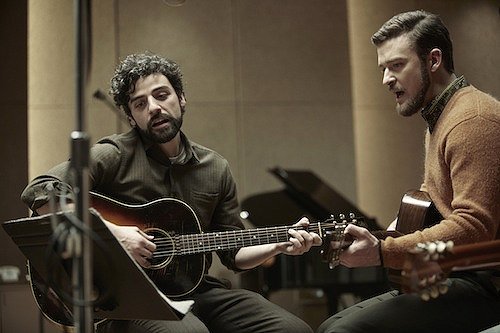 Those are some impressive beards.


There isn't much of a story to Inside Llewyn Davis. It's more a series of vignettes in Llewyn's week. He hops from house to house, seeing who he can alienate next, eventually hitches a ride to Chicago with a flamboyant jazz musician (John Goodman) and his silent chauffeur (Garrett Hedlund), and eventually just winds up playing whatever gigs he can get. The plot meanders, because Llewyn himself refuses to progress or change in any way. I realize this was the idea, but it still makes everything feel pretty pointless. Which again, is the intent, but that doesn't mean I have to like it.

What I do like, however, is the art design and cinematography of the film. Most shots are framed to make Llewyn's world seem as big and cold as possible. The color palette is muted and grey, and even apartment hallways and truck stop bathrooms are wide and open, to make Llewyn seem as small and insignificant as possible. In fact, Llewyn is the only one who doesn't seem to understand how unimportant he is to the picture as a whole. In keeping with the theme, the only time Llewyn is allowed the full screen and the total focus is when his guitar is in his hand and he is performing. These are also the only time that Llewyn actually comes across as pretty likable, so it fits that we get to see him as the giant he sees in his head.

I should also point out that the last ten minutes of the film are brilliant, and a great example of how successful you can be when having respect for your audience's intelligence. The Coens don't spell things out for you. They're willing to just throw out teases and hints and let you fill in the rest. On another note that's required when talking about this film: The soundtrack is as excellent as expected, but like the film itself, seemingly designed to appeal to very distinct group of people. (In the soundtrack's case, people who listen to Mumford and Sons because The Avett Brothers are too heavy.) In the case of the movie though, I really hope you're a member of the group this appeals to. It's certainly a good film, but lacks the universal appeal of other CoBro works. If you're the kind of person who reads these reviews, you're more than likely looking forward to the film on a name-basis anyway. Your mileage may vary, and I sincerely hope you get more out of it than I did.

MINORITY REPORT: But does this movie have an ending that's guaranteed to piss a bunch of people off? I love those. - Sean "Keanu Grieves" Hanson