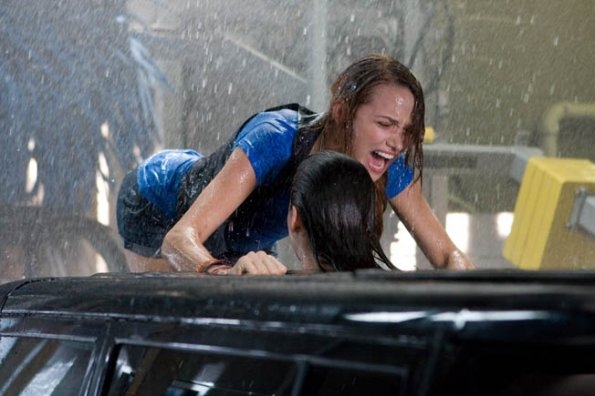 Like the Saw series but way less annual, the Final Destination movies deliver wicked good times with clever staging alone. The franchise's fourth installment incorporates not one, but two -- count 'em, two! -- gimmicks that would make William Castle proud: 3-D presentation and the DBOX, a vibrating seat installed in six major-market theaters specifically for this movie. Dubious innovations aside, does the series still hold water? Is it still F-U-N?

What in Death's name is this ghastly rubbish?

There comes a time in everybody's life where they start to wonder where it all went wrong. This happened to me during the supposed climax of The Final Destination. Whilst watching a young lady being mangled by an escalator motor after having fled from an exploding cinema screen, it suddenly dawned on me that I am a grown man wearing silly plastic glasses, drinking a soft drink through a straw. I was soon distracted, however, by the passing thought that I had missed lunch and maybe there was some of that nice ham left in the fridge at home. This is what happens when we're forced to sit through turgid dross aimed at retarded teenagers; our minds wander onto much more interesting matters.

The story revolves around four young, rich, beautiful arseholes who don't have jobs or families, but do have seemingly unlimited wealth with which to lead their dandy lifestyles. I think we're expected to like at least one of them, because he's always on screen absorbing everything around him like a black hole of drabness, where charm and charisma go to die. He's also the only guy who knows what's going on, because every Final Destination needs its premonition guy. With his amazing psychic powers he is able to save the six least likable people he can find plus Mykelti Williamson, who is just too good for this shit. These hateful scumbags then go their separate ways and proceed to die in a series of scenes that combine Home Alone-style prop-based slapstick with genuinely grisly gore, all without any sense of tension or emotion.

"Wait...what are we doing in this movie again?"

Notable among these meat sacks is a character referred to only as That Racist Guy (I'm not making this up). It is made very clear that we should hate this guy because he is a racist and that he is going to die first because we all want to see that, right? Well sure, but the fact that he has to die for being a racist never alleviates the knowledge in the back of our minds that Mykelti Williamson also must die for being the only black character in a horror movie. It's the cinematic equivalent of saying "I'm not a racist, but..."

Director David R. Ellis (Snakes on a Plane) films these horrific deaths without even the slightest glimmer of emotion, including a scene where a mother is killed in front of her children. Even narrowly surviving a certain death scenario is met with nothing but scepticism and disdain. I don't think the writer has ever actually met a human in real life and all of the characterisation is constructed from pure guesswork based on MTV shows and internet pornography. The four protagonists share a particularly odd relationship; they clearly dislike each other as much as we dislike them, but they are bound to each other for some reason and never interact with anybody else until they meet Williamson, and even then there is a tangible sense of elation at having finally made a black friend and being thenceforth safe from the same fate as That Racist Guy.

This is the villain. Seriously.It mustn't go without saying that the film makes full use of the third dimension, or "3-D". What this means is that sometimes things fly towards the screen and give you a headache when you try to focus on them. Be they cars, boobs, intestines, nails or even a quarter, you're treated to the full visceral effect of actually seeing things moving towards you! If only they had that in real life! Personally, I can't wait for Hollywood to get over its current 3-D fad and develop a penchant for things like narrative structure and emotional investment, which I hear are all the rage on television right now.

Imagine my surprise when I thought the film had reached the point at which it was destined to stop (calling it an ending implies some kind of story arc), only to find that what we had spent the past ten minutes enduring was another premonition and we have to sit through it all over again, this time with less gore and more randomly firing nail guns.

That brings me to the main problem of the film, and all of the Final Destination sequels for that matter. There is no frightening creature or villain to antagonise our billionaire orphans. There is no philosophical or personal reason for these people to die. They simply must die, and they are made to be thoroughly detestable just so we don't feel bad about watching them get mutilated.

I don't know about you, but I like some kind of meaning to my horror, not just a series of douchebags dying increasingly violent deaths for no reason other than that teenagers and other assorted idiots will pay to see it. And they'll sit, as we all will, watching through silly plastic glasses, drinking soft drinks through a straw, wondering what's for lunch as a young man's internal organs are forcefully vacuumed from his anus and blasted in three dimensions towards our faces in one of the film's quieter, more thought-provoking moments.

Rather pointless, wouldn't you say?

MINORITY REPORT: This film, like Death itself, sucks ass


I readily admit to liking the first three Final Destination films, all clever and pure exercises in grand guignol mousetraps. Solid filmmaking can make bad movies good (the second and third films are a testament to this truth), but The Final Destination is content to be bad, exceptionally bad, so bad it goes past "so bad it's good" to extra-extra-bad with a side of awful.

IMDb estimates The Final Destination's budget at $43 million, but for the life of me I can't imagine where the money went. The only thing we know for certain is here's where it didn't go: 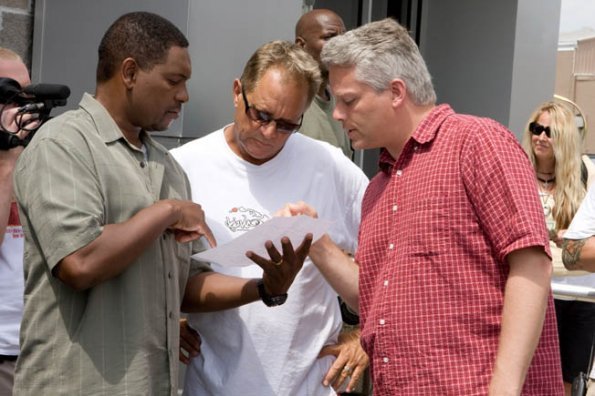 Put simply, it's really hard to fuck up a Final Destination film. Sketch out a dozen stock characters, put them around some dangerous objects that could figure into a bizarre accident, throw in some red herrings (oh he survived the garbage disposal but there's a giant plate of sheet glass and it's falling!), film it in a halfway-interesting manner and -- voila! -- you have an instant hit, a bad movie that's a lot of fun. Throw in access to the third dimension and, as the producers of the My Bloody Valentine remake figured out, those of us who wax nostalgic for theater gimmicks will flock in droves and have a blast.

Ellis and his writer, Bress, had the formula down pat for Final Destination 2, their previous effort in the series, but this one fails on every level... and then some. It's hard to fail at failing, but Ellis fails at even that. Ed Wood taught us the best bad movies are imbued with the elation of being able to make a film at all, and Ellis, who parlayed a career in stunt work into a career behind the camera, could learn a thing or two from Wood about gratitude. For a movie directed by a man so lucky to be making movies, why is The Final Destination such a joyless affair?