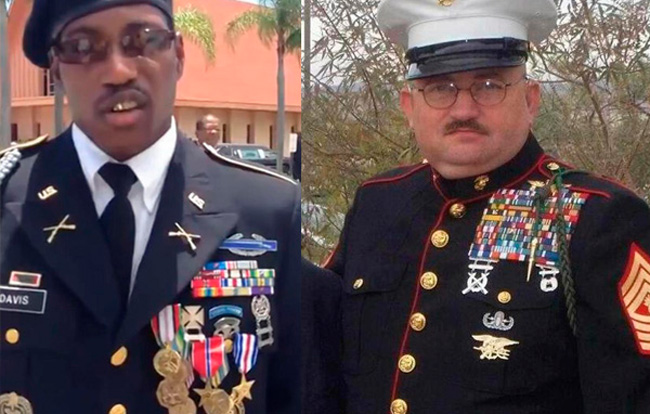 The Valor Pigs are at it again, surrounding you and ganging up on you about the military uniform you are wearing. Nothing satisfies these medal-hungry oinkers. When they come snorting around demanding to know where you went to basic and what was your job in the military they are violating your human rights. This is a free country and you are allowed to be an admiral in the army with the iron cross and three figure skating pins if you so choose. The best way to get even with the stripe hogs is to stare down the barrel of humiliation and humiliate them right back. It's time to declare war on the valor police!

You can defuse this situation quickly if you can name a believable basic training location. Try one of these:

Army HQ of New York City - "It's the one with the taxi out front."
Secret Operations Camp - "I'm not allowed to tell you where it is."
Ranger Island, Texas - "Where rangers go to be born."
Fort Springfield - "The big fort in Springfield."
Valor Falls, Colorado - "It's beautiful this time of year."
Fort St. Helens - "Best zip line training course in the US."

Step 2: Always make sure your rank is higher than their rank

According to Wikipedia the highest military rank is a General of the Army or 5 star general. There was a proposed 6 star general rank which was posthumously awarded to George Washington so that no man may ever outrank him. With the exception of you. That's right. You are a 7 star general. Here is what the epaulets should look like: 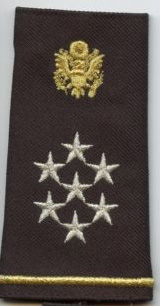 Don't worry if you don't get them on quite right. Who is going to tell you that you're wearing them wrong? Some other 7 star general? As if.

Step 3: Demand to see their army badge (because you have yours in your pocket)

You're going to need to carry around an official US Army badge. You can buy a used one from ebay or print one out from the Internet and then laminate it and put in your wallet. 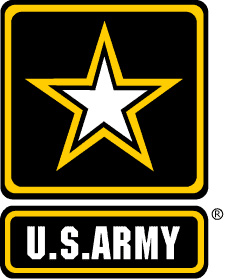 Beat it up a little after you have laminated it just to prove you have been in the military for a while.

Step 4: Give them a believable MOS (military occupation specialty)

Step 5: Tell them you killed a terrorist

Nothing impresses a valor inspector like hearing that you have bodied one of the face cards from the terrorist deck. You can't just throw down some Jihadi Joe, this has to be a top tier terrorist. Someone like Ayatollah Kabombi, Mohammad al Muslammo, Bin Laden's son when he had the armor upgrade, or maybe just tell them you took out the alien queen inside her hive. These kills can't be sniper kills either, this had to be hand-to-hand combat using some badass weapon like a machete or a fire ax. Really play it up. Tell them how you were shot in the head and lived.

If they are still persisting in questioning your valor, it's time to demand they stand to attention. You can do this by shouting "UHhhh-ten-SHUN!" If they are real soldiers or marines they will snap to attention and be unable to leave until a superior officer tells them "at ease." This gives you plenty of time to make your getaway since they probably have to hope an officer stumbles on them and tells them they can relax.

In the meantime, you can dream up some war stories back at your home base.