TyshaDragon, submitted by R-Lo. We make fun of furries a lot here at Something Awful, but there is another kind of crazed sub-group that the Internet has facilitated and, while they aren’t usually as sexually repugnant as furries, they are at least ten times as crazy. They’re called “otherkin” and what that roughly means is that they have such a shitty and mundane life that they convince themselves they are actually magical dragons and other creatures who are occupying a human host. It sounds too ridiculous to believe, I know, but there are probably thousands of these dumb fucks and their numbers are increasing every day. Through the Internet high-school dropouts obsessed with Dungeons and Dragons around the globe are suddenly meeting other supernatural magical beings that use their incredible powers of ancient thaumaturgy to hang out in Usenet, talk about Astral Projection, and complain to each other about how dumb the “mundanes” are that come into the Burger King where they work.

Tyshadragon is like a horrifying prototypical example of what an average otherkin embodies. She believes herself to be a dragon born in an ice mountain in the 15th century, she thinks her parents are ancient elemental dragons, and she talks knowingly about “the veil” and how to penetrate it. Unless “the veil” is “collecting welfare from the government” I have serious doubts that Tyshadragon has any firsthand experience. 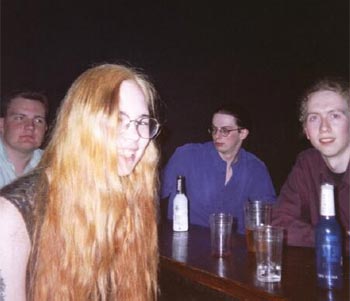 I hatched in 1464 (this is a rough guess using Earth years), in the DragonWolf (Daekar’Ootar) Clan's hatching grounds, deep within one of the glacial mountains of Illsyndra. I was the first of the seven hatchlings and bore the colours of both of my parents as did my sister, Kel'sharana. My brothers, however, only bore the colours of one. It was a very trying first couple of years. We stayed in the clan mountain, as custom dictates, to learn about socalising with other hatchlings and to make sure that the clan bonds are strengthened between the youngsters. However the other young dragons didn't like me and my siblings because we were different. We often had to suffer mild tail pulling and scorching from those who could produce flame. When we were older however our father taught us how to hold our ground and the bullies soon learn it was better to have us as allies rather than enemies!

Tyshadragon also seems to be obsessed with validating her insane lifestyle – not surprising since the real world would frown upon such madness but it’s part and parcel of the Internet – by surrounding herself with similar dumbasses on her forums and by working hard to receive as many meaningless web awards as possible. She has six pages of awards for her site, all circle-jerking otherkin awards or general web awards where the person giving it to her probably didn’t even look at her site. She also has a painfully inane web journal that is splattered with the jargon of delusion and full of pathetic references to her actual life. Oh look, here’s a perfect example! 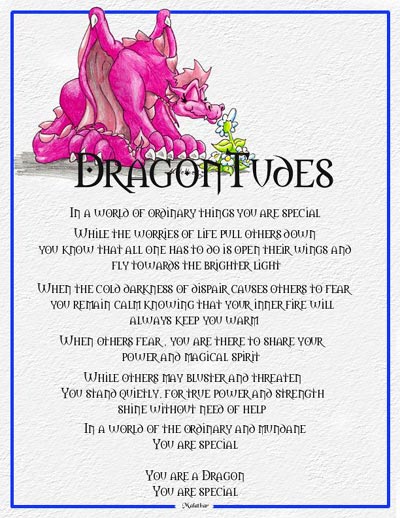 Well I was hoping for another day like yesterday, but my boyfriend decided to take the day off work too and he doesn't like me spending a long time on my pc. He's downstairs at the moment fixing speakers to my dragon wall, that way we get to watch Fellowship of the Ring (which arrived today) in surround sound.

I wonder why he doesn’t like you spending a long time on the computer?! Hmm, do you think maybe he notices that it’s DRIVING YOU BATSHIT CRAZY!?! Perhaps?! Remember folks, we’re all just two or three shitty jobs and a few too many Dragon wall-scrolls away from following in Tyshadragon’s footsteps. My advice to you if you’re really into Dungeons and Dragons and have a shitty job; stay the fuck away from Usenet and IRC! Hell, just get off the Internet. Move on to something less damaging to your life like a recreational heroin habit.

If you’d like to say hi to Tyshadragon and/or wish her well, she has a guestbook and a forum overflowing with otherkin!

Tysha, if you're reading this, I'm sure it will enrage your Dragony magic but stop and think about it and maybe assess your life. I'm sure you couldn't possibly be as fucking retarded as your site makes you seem, so stop using the Internet for a couple months and I'd be willing to bet that you will quickly forget all about being a magical dragon.