Ghost Rider: Spirit of Vengeance; This Means War; We Need to Talk About Kevin

It seems like this week's big releases snuck up on us, fearful that someone might get wind of their mundanity. First up, militant Nic Cage worshiper Martin R. "Vargo" Schneider expresses his disappointment in Ghost Rider: Spirit of Vengeance; then Joseph "Jay Dub" Wade expresses his surprise at not hating This Means War as much as most critics. To close out the weekend, Sean "Keanu Grieves" Hanson really needs to talk about Kevin.

EXPECTATIONS: I honestly can't bring myself to have the level of excitement for this film that I feel I should have. Yes, the 2007 Ghost Rider movie wasn't actually any good, but we're supposed to want to give it a second chance on the grounds that most of the first movie's problems stemmed from the fact that they gave it to the guy who made Daredevil and Simon Birch. This new film, however, has been taken over by the team of Neveldine/Taylor, who previously brought us the Crank films and the strangely good Gamer. So why aren't I excited about this? Directors who will sit back and let Cage be Cage while lighting his skull on fire should be all I could ask for, right?

Well, maybe it's because I didn't actually care for the Crank films, or maybe it's because the last comic book movie these guys were involved with was Jonah Hex. Mostly it's because I think Ghost Rider might be one of the least interesting comic book characters you could make a movie out of. He's like Spawn-lite. If I wanted that, I'd just watch... well, Spawn, I guess. And why would I ever do that?

Yes, that really is Christopher Lambert. Turns out he isn't dead after all.

REALITY: In the age of reboots and remakes, it's becoming more and more apparent that no one knows what the word "sequel" means anymore. From the opening lines, it's clear that Neveldine/Taylor don't care about Ghost Rider and might not have even watched it. (Probably a wise decision on their parts.) Ghost Rider: Spirit of Vengeance is not a traditional sequel. It's merely a film that features the same character played by the same actor with events that take place more or less after the events of another film.

I'm actually in favor of this "To hell with continuity" movement in films, because it basically amounts to several different filmmakers being allowed to give their unique interpretations of a certain character. Comic book movies especially lend themselves to this concept, because one comic book character may have dozens of iterations over several different tangential universes. This is all well and good, but it doesn't change the fact that Spirit of Vengeance makes no sense paired with the original film, and the average moviegoer is going to want it to. If you're going to give us a sequel no one asked for, it might as well line up with the original movie no one wanted.


Spirit of Vengeance takes place kinda sorta after the original Ghost Rider, with Johnny Blaze (Nicolas Cage) hiding somewhere in Eastern Europe for... reasons, and trying to keep the Rider from coming out and taking over his body, because it was interesting (not really) when they did this in The Incredible Hulk. Blaze is tracked down by an alcoholic French priest named Moreau (Idris Elba, managing to be the most entertaining part of this move by virtue of the fact that he is Idris Elba), who offers to remove Blaze's curse in exchange for him escorting a little boy named Danny (Fergus Riordan) and his mother (Violante Placido) to sanctuary.

See, the Devil (Cierán Hinds, who is kind of a step sideways from the last movie's Peter Fonda) is after Danny's body to take over the world, which is - by all accounts - rightfully his, according to the plot. There's probably a point we can make here about the devil being a creepy old man who wants to get inside the body of a young boy to make him feel powerful again, but quite frankly, I don't want to touch that one. Blaze gets to fight off the Devil and his super-gross henchman (Johnny Whitworth, who I'm convinced is actually a young Kurt Russell clone) and we all get to learn the answer to the age-old question "What would Terminator 2 be like with Nicolas Cage in it?" Turns out the answer is "Not Very Good." 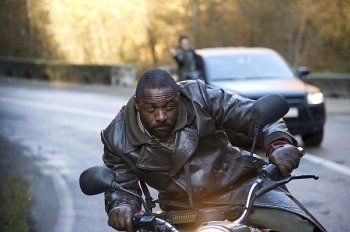 He's riding, yes, but he's not a Ghost.See, the problem with Neveldine/Taylor taking over a character like Ghost Rider is that even though Nicolas Cage can do everything that's required of their madcap style, there's not much that can be done with the character. We've created this being that is cartoonishly super-powered to the point where absolutely nothing feels like a legitimate threat to him, so we might as well have him use that power in interesting and exciting ways, right? Well, not really. There's only so much you can do with "guy hits other guy with a chain," even when the first guy is a flaming skeleton.

The action scenes in the first movie were more interesting, because they featured Ghost Rider going toe-to-toe with fellow Occultist beings who seemed to pose an actual threat to the Rider, not just dudes with guns. The one interesting concept that the film brings to the table is the idea that any vehicle the Rider touches becomes "Hellified" like his motorcycle, but even that's only dealt with twice, and only once in an interesting fashion. Maybe I would be happy with a movie that consists of two hours of Nicolas Cage lighting vehicles on fire, I don't know, but the point is that there's got to be more to it than what we're given. The very manner in which the Rider moves and his hilarious voice indicates that Neveldine/Taylor are definitely much more in touch with the "insane demon" side of the character, but something is keeping them restrained. It could be budget problems, it could be the PG-13 rating or it could be the bigwigs at Marvel. Either way, this isn't the flat-out craziness we were expecting from this team-up.

This restraint requires the filmmakers to ride on their storytelling abilities, and unfortunately they have none. Because Danny's character and his supposed powers are never quite established, the bond between he and Blaze is tenuous at best, and the two of them never really have more than a few minutes together before the movie roars to its climax. Now, this conversation between them is one of the better parts of the film, but still it doesn't mean anything. I realize that the movie is being sold as"Crank: Skeleton Edition," but this character isn't going to die if you slow down the narrative for just a minute or two. There's not even a satisfying conclusion. Ghost Rider shows up, does his thing with absolutely no threat or problems whatsoever, and then he literally declares "We Won." Roll credits. The movie is only an hour and a half long, guys. You could give us a bit more than that. There's stylistic frantic pacing, and then there's laziness. This is the latter.

No visual effects needed, it's all in the performance.

So, what about the film's saving grace, the majestic being known as Nicolas Cage, whose lineage can be traced back to Abraham Lincoln and Charlemagne? Well, he's just fine. This movie allows Nicolas Cage to do the two things he does best: address bizarre things with a flat deadpan, and occasionally freak the hell out. Many of the best parts of the film consist of Cage explaining quite plainly who the Rider is and what he does as if he were talking about making his favorite sandwich. "Doo-de-doo, no big deal. Every once in a while I become possessed by a psychopathic demon and light my whole body on fire, and I suck out people's souls. Do-do-doo, I like to put some arugula on there, a little dijon mustard, maybe top it off with a fried egg."

The scenes in which Cage twitches like a crack addict while trying to restrain the Rider from coming out make it clear this is some of the most fun Cage has had in years. Much like Hugh Jackman as Wolverine, no matter how bad the film is, it's lightly redeemed because it's obvious how much Cage loves being this character. Why wouldn't he? This is a character that allows Nicolas Cage to act like his penis is a flamethrower, and it's a testament to his performance that the joke is still funny even after being spoiled in the trailers and this review.

Look, Ghost Rider as a character has managed to bore me in two separate movies, but Nicolas Cage seems to love him, so maybe there's something there that I don't see. Or maybe Nic Cage is a crazy person, I don't know. The thing is, I'm really hoping this gets made into a trilogy, so that maybe we can get something interesting out of the character at last. (While we're at it, can we get a new Blade movie starring Idris Elba? Thanks.) Maybe someone can convince Lars von Trier that it's time to make a comic book movie. One with a Hellfire Train in it. Make it happen, Mr. Cage, like only you can.