It's almost Halloween, which means it's time for a new Paranormal Activity. What are they up to now? 4? Ian "Professor Clumsy" Maddison checks in to keep count. Also, Tyler Perry steps into Morgan Freeman's shoes; Joseph "Jay Dub" Wade finds out what happens when you Cross him.

EXPECTATIONS: They are just going to keep churning these out every October, aren't they? Give the camera to the cast and these things film themselves! Add to that the fact that these films are guaranteed box-office hits, and you've got a formula for a franchise that will never ever end.

Unfortunately, the marketing for Paranormal Activity 4 is confirming something I've been asserting for ages now; these films are designed and enjoyed like fairground attractions, not works of cinema. I would love to petition to have these things cast out of cinemas forever and screened exclusively at amusement parks, but we all know that will never happen. I'll just have to grin and bear it, I guess.

REALITY: This is a major departure for the series, in that it trades in its hokey scares for character-driven comedy. I was pleasantly surprised to find that here we had characters we could relate to; here we had protagonists who fit neatly into the film's target audience of bored suburban teens; and here we had a supernatural power seemingly rebelling against the franchise's soap-opera scenario by inviting the audience to laugh as well as scream. But, it all falls apart in the third act when the franchise-spanning plot rears its ugly, nonsensical head. 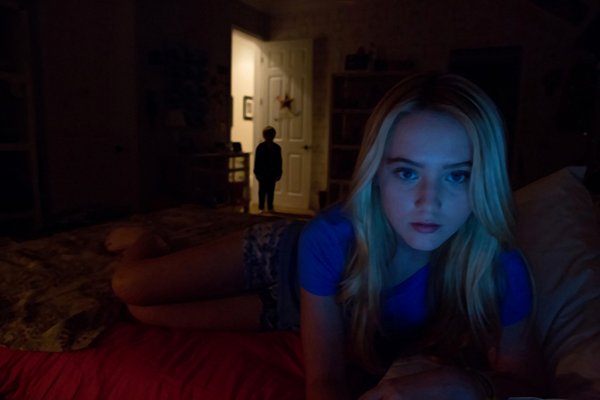 Oh hey, a scene that isn't in the film! Just like that trailer.

This film is light on plot, to say the least. Suburban teenage daughter Alex (Kathryn Newton) and her try-hard boyfriend Ben (Matt Shively) decide to record all the weird goings-on regarding creepy neighbour kid Robbie (Brady Allen), who is staying with the family while his mysterious single mother is in the hospital. Things gets weirder when Robbie's imaginary friend turns out not to be quite as imaginary as we assumed and his behaviour starts to affect Alex's brother Wyatt (Aiden Lovekamp).

What makes Paranormal Activity 4 work, when it works, is the teenage couple at the heart of it all. Alex and Ben are real, believable teenagers. Their relationship rings true, with an innocence and naiveté underlining their flirtation. Ben talks of sex as though he knows his onions, but the pair ends up playing in treehouses and not being allowed in a room together without leaving the door open, because they're fourteen and that's what it's like when you're fourteen. Alex is made responsible for babysitting her younger brother, but she still insists that she isn't a grown-up (for example, when Wyatt says no grown-ups are allowed in his treehouse). It's a very confusing transitional time. 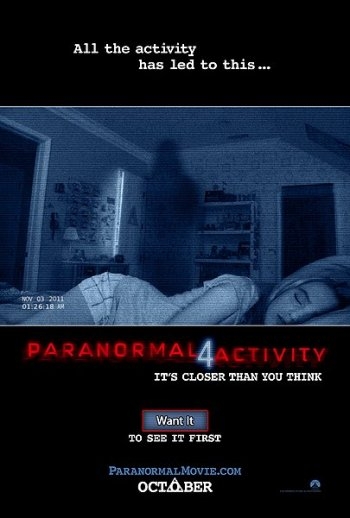 It's close, but we have a poster here representing another scene that isn't in the film.The ghosts in the previous films have embodied certain ideas. First time around, we had the manifestation of a doomed relationship, for example. This time, we have a mix of bad parenting and a fear of growing up taking spectral form. The parents, barely present even when they are home, bring on the fate of their children through their lack of caring. Given that six-year-old Wyatt has a laptop that he takes into the bath with him so he can watch Spongebob Squarepants and is left completely alone, we can't really have any sympathy for his uncaring mother when the obvious happens.

I've been talking about this film under the assumption that you can guess exactly what happens in its third act, because it's a Paranormal Activity movie. There are no surprises left to be drawn from this scenario, apparently. That's probably why Paranormal Activity 4 isn't scary at all. That's not to say that it tries and fails to be scary, it simply does away with scares in favour of comedy. For me, this came as a pleasant surprise, but fans of the franchise will be left scratching their heads wondering where their fairground thrills have gone.

As we watch Robbie being as over-the-top creepy as possible while Ben turns an Xbox Kinect into an effective ghost-detecting device and the mother's "inappropriately big" knife gets stuck on the ceiling until a convenient time, it's very clear that we're supposed to be laughing, not jumping out of our skins. Our expectations are played with, certainly, with a camera strategically placed to be obscured by the open fridge door, which always stays open just long enough for something to sneak up behind it, but when it closes there is never anything there. Has the Paranormal Activity franchise reached the point where it is tired of its own fans' expectations? Are we supposed to be happy that we came expecting scares and got laughs instead? Obviously, I found it more interesting than earlier entries into the series, but fans won't. They'll be disappointed.

As much as the comedy and the characters were working for me, this film collapses entirely when it comes time for the third act and the predictable pop-scare bombardment is brought back out and paraded before us like a mangy circus bear. What's worse is that all the scares are simply homages to other films; The Changeling, The Shining, The Omen and Poltergeist are all evoked in an attempt to borrow their effectiveness. This isn't earned, it is simply expected, and that makes it boring.

When your recurring monster character is a bad actress with recently styled hair, your horror property starts to look a little stale four films in. There's a real, sincere, human heart at the core of this film; it's just a shame that it's surrounded with flimsy clichés.

MINORITY REPORT: Why is Paranormal Activity suddenly branching out into comedy? There's no room for another fake docu-comedy about suburban nightmares. We already have Modern Family for that. - Joseph "Jay Dub" Wade