You know the Dog Days of Summer are here when everyone gets excited over a movie about a talking raccoon. After all the giant robots and giant lizards and giant Hugh Jackmans, all Hollywood has left in its big bag of tricks is a raccoon with Bradley Cooper's voice. First up, Joseph "Jay Dub" Wade endures the wacky sci-fi lunacy of Guardians of the Galaxy. Next, Libby "Gentleman Loser" Cudmore makes a case for the James Brown biopic Get On Up. Finally, our own photoshop captain steps up and declares A Most Wanted Man to be the movie of the first week of August. See? August isn't so bad!

Guardians of the Galaxy

EXPECTATIONS: The most hotly anticipated movie of the summer is also, for some stupid reason, the one movie with which Disney/Marvel & Friends decided to play coy. For as heavily discussed as Guardians of the Galaxy is, I can't say that I've seen the trailer more than once this entire summer. And you know I've been marching off to see this crap week in and week out like a good little soldier in the Internet Movie Brigade. Maybe I'm looking in all the wrong places. Or maybe I'm simply not the guy who needs to be sold on a space opera starring a talking raccoon. Whatever the case, it really seems like Disney is afraid to advertise their big, weird sci-fi movie too heavily. I sincerely hope it's not because the movie is actually mind-bogglingly terrible. 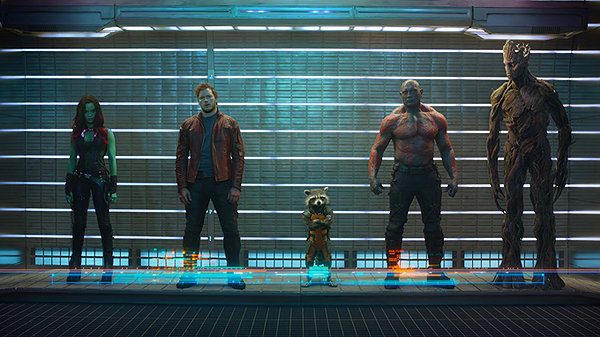 Terrible? Who would ever get that impression?


REALITY: If you've read Current Releases for any length of time, you may have noticed some of our particular movie prejudices shining through. Chief among these is our steady, simmering distaste for all things Joss Whedon. It's not necessarily that he's a bad filmmaker who doesn't know how to write women, but what happened to The Avengers is kind of inexcusable. Whedon took the reins over four separate franchises, each working to create heroes with distinct personalities and motives, and mashed them all together into a corporate-mandated CGI monstrosity that robs every character of any defining traits outside of what colors they wear.

Which brings us to Guardians of the Galaxy. Guardians is essentially the exact same movie as The Avengers, with one crucial difference: It paints each of its heroes as individual people with thoughts and feelings worth caring about, and not simply a mouthpiece for jokes during explosions. Of course, it's that and about a half dozen other things as well, but where Guardians really soars is in its delicately-balanced character work. That may be an odd thing to latch onto in a sci-fi movie like this, but it's what elevates the inherently schlocky material beyond its comic book roots. 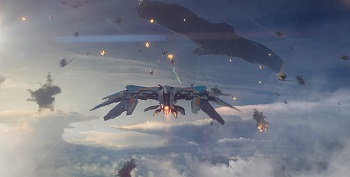 Guardians stars TV's Chris Pratt as Peter Quill. Abducted from Earth by space pirates as a young boy, Quill now traipses across the galaxy, stealing valuables and telling people his name is Star-Lord. He steals an orb of great importance to the film's villain, a madman named Ronan the Accuser (Lee Pace), and eventually lands himself in space prison. There, Quill teams up with four fellow inmates to stop Ronan from collecting the orb and using it to destroy the galaxy. By his side, Quill rallies Drax (Dave Bautista), a rockheaded killer who seeks vengeance on Ronan for murdering his family, Gamora (Zoe Saldana), an assassin secretly in league with Ronan, and the bounty hunter team of Rocket and Groot. Rocket (Bradley Cooper) is a pissed-off science experiment of a raccoon, and Groot (Vin Diesel) is a walking tree whose vocabulary is limited to "I AM GROOT."

I realize I basically just used up the entire bag of stupid words movies are allowed to employ in one go, but then again, the movie seems to know this, too. Assassins, space pirates, Vin Diesel; if you mistook the plot for another Riddick movie and ran screaming in the other direction, I honestly wouldn't blame you. But for that very reason, Guardians also employs a number of tricks and familiar cues to keep everything at least somewhat grounded. For example, the orb everybody is after contains another Infinity Stone, so you know you're still in Marvel's increasingly baffling wheelhouse. And when there are Infinity Stones involved, you know Thanos (now a CGI Josh Brolin) is hanging out somewhere nearby.

For another example, and one of the aces up director James Gunn's sleeve, the film is punctuated with '70s pop/rock tunes like Blue Swede's cover of "Hooked on a Feeling." This is a welcome break from the generic scores plaguing Marvel's films lately, and it helps keep the mood light and bouncy, even with the fate of the galaxy at stake. Peter Quill's prize possession is his Sony Walkman, loaded with a mixtape labeled "Awesome Mix Vol. 1." It's the only thing he has to remember Earth by, and he employs it liberally. When we first meet adult Quill, he's breaking into a vault and jamming out to the music in his head. It's a fantastic way introduce our hero as a consummate goofball, as well as declaration that you really shouldn't take this film too seriously. 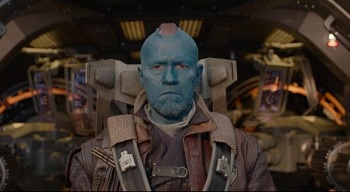 "I come from the planet that exports food coloring."Having said that, Guardians is at its best when it's playing fast and loose with its space opera trappings. The film knows how ridiculous it is, and steamrolls ahead with crazy shit like a mining colony inside a giant severed head, or Michael Rooker as a blue space pirate with a stone mohawk and a flying arrow he controls by whistling. And speaking of Michael Rooker, there really isn't a bum note to be found among the cast. James Gunn's ear for dialogue and eye for performance are superlative, and the only real negative here is that the villains get incredibly shrift compared to the heroes. It's almost like the film is so in love with its heroes that it simply can't bear to cut away from them for one hot minute.

It would be nice to know more about Ronan and his assassin Nebula (Karen Gillan) than the fact that they're super evil and want to blow up the galaxy. Why is Ronan so pissed off? Is Nebula some kind of robot? When will Thanos hop up off his space throne and wipe the floor with these fools? Some questions matter more than others, but it would help if Marvel would get its act together sooner or later. As it stands, James Gunn has crafted an insanely fun space opera in Guardians of the Galaxy, and Marvel has cornered the market on expertly costumed villains who do absolutely nothing.