EXPECTATIONS: Duncan Jones' directorial debut Moon was one of the more interesting films of 2009, so I'm glad to see he hasn't wasted any time getting back in the science-fiction saddle. That said, I'm not really sure what to make of Source Code. It seems to be using ideas from Quantum Leap to establish its scientific conceit, but I can certainly forgive it that because I kind of liked Quantum Leap. Ultimately the whole film will hinge on how well the idea can be stretched into feature length.

REALITY: Source Code requires huge leaps of faith from its audience, which is exactly what I want from a good science-fiction story. If you don't have to explain it to your dad, it's not sci-fi. Unfortunately, the scenario itself leads to a lack of tension later on and as the third act rolls along, you may begin to slowly realise that this is not the film you thought it was. 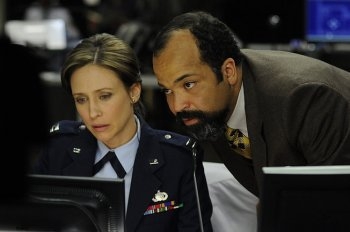 There's always that one guy in the office who has to invade your personal space.The story begins with Captain Colter Stevens (Jake Gyllenhaal) waking up on a train bound for Chicago. He has no idea how or why he got there, and the lady across from him, Christina (Michelle Monaghan), keeps calling him Sean. In a state of confusion, he clambers around the train clumsily until the whole thing explodes, killing him and everyone on board. An odd start to the day, I'm sure you'll agree.

After the explosion, he immediately comes to in a strange metallic capsule, strapped to the wall and surrounded by clunky computer technology. He is greeted by the voice of Goodwin (Vera Farmiga), his commanding officer in his unorthodox time-travelling mission. You see, Colter is inside the titular Source Code, a machine that can transplant a human mind into the last eight minutes of somebody's life in order to find information. The program and his mission are explained to him gradually by Goodwin and Dr. Rutledge (Jeffrey Wright), the scientist behind the idea, and he is sent back again and again until he can learn the identity of the train bomber, who, unless apprehended, will make another strike in the middle of Chicago.

Nine years ago, this would have been an incredibly edgy and controversial film to make, but it seems that we've officially reached the point at which this subject matter can be deemed palatable again. That actually works to the detriment of the film in some ways: Imagine if the action had been transplanted onto an aeroplane heading toward the World Trade Centre and you'll see what I mean. By keeping just enough reality in here, you can evoke historical precedent without ever having to offend anyone.

The most interesting scene in the film occurs about halfway through; in it, Colter follows and accosts a man who appears to be from the Middle East, presuming he is the bomber. After insulting and physically assaulting the man in an attempt to find the mobile phone that triggers the explosive, he succeeds only in making a fool of himself. Embarrassed, he realises he might be a bit of a secret racist and he's going to have to start being sensible about this in the future. It's a telling moment of character development and a very effective moment of satire. It also speaks volumes for the charm of Gyllenhaal's performance that we are able to continue to care about this character after this. 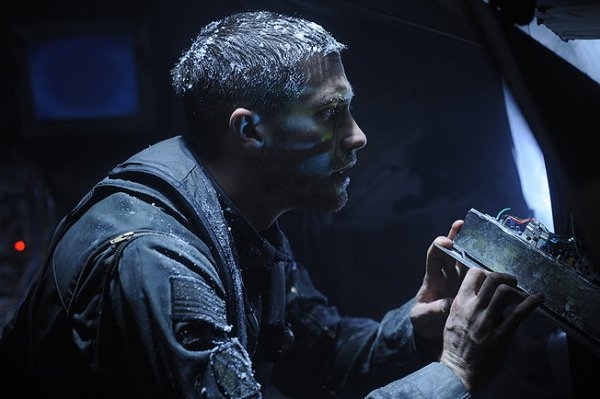 Sadly, it all starts to get a little dull from here on out as the stakes are just intangible. There's supposedly some time limit for the next bomb going off, but we're never given any idea how close we're getting to it. There is also little urgency to the train scenario after we've seen it a few times; Colter even starts to treat it like a opportunity to show off to the other passengers, like Bill Murray in Groundhog Day. The film then starts to show its true colours, revealing itself as a life-affirming romance disguised as a sci-fi action thriller. It's a sudden change of pace that leaves the third act feeling a little stale, in spite of a self-aware cameo from Scott Bakula as Colter's father.

It's certainly engaging for the most part, with a terrific cast - particularly Jeffrey Wright, hamming it up wonderfully as a classic, hissing mad-scientist type - and an interesting central idea. It all just kind of hangs together a little strangely, especially with the implications of the ending casting a retroactive shadow over earlier scenes. This would have made for one hell of an episode of The Twilight Zone, but as a feature film it feels like it has been stretched a little too thin to really stay with its audience for long. I do hope, however, that we get to see more interesting science-fiction films of this type, including more from Duncan Jones, for whom I still hold out hopes for a long and fruitful career. If this is him at his weakest, I can't wait to see him at his best.

MINORITY REPORT: Sam, Ziggy says there's an 80% chance Source Code will lead to more work for Duncan Jones. Says here he may go on to direct that remake of Silent Running you've been dreaming of. If only enough people buy a ticket. Sam, if every person you leap into buys a ticket for Source Code, we could just make this work! -Al