EXPECTATIONS: I've been excited for this film for a while now. For some reason I can't quite explain, it fills me with glee every time the trailer begins and Mark Wahlberg declares "Ah'm BIG! Ah'm HAHD!" Beyond that, I've long been of the belief that, Transformers aside, Michael Bay knows exactly what he is doing, and is a much smarter director than anyone really gives him credit for. A lot of critics are calling this "Bay's attempt at a Coen Bros. movie," without realizing that Michael Bay already made a Coen Bros-style comedy. It's called Armageddon, and it is awesome. So I'm hopeful for this one.

REALITY: Pain & Gain has made a big deal out of the fact that it's mostly a true story, all of which can be read here. The taglines on all the advertising say "This IS A True Story", while the opening narration calls it "unfortunately true," and during a particularly outrageous moment, the words "This is STILL a true story" flash on screen. Many articles have popped up in the past few days examining how true the film really is to to the actual story, but they're all missing the point.The script may read "This is real, not even kidding you guys," but what it's actually doing is reminding the audience "Michael Bay is being 100% serious here."


The film follows Daniel Lugo (Wahlberg), a conman-turned-fitness-coach who develops a plan to get all the money he's always dreamed of after listening to a seminar by a motivational speaker (Ken Jeong, who is apparently somehow still a person people care about). His plan: Kidnap his rich douchebag client Victor Kershaw (Tony Shalhoub) and force Kershaw to sign over all of his assets. To assist him in this clearly well-thought-out, foolproof plan, he enlists the help of fellow bodybuilders Adrian Doorbal (Anthony Mackie), who needs money for operations to jump-start his steroid-ruined penis, and Paul Doyle (Dwayne Johnson), a born-again recovering addict trying desperately to stay clean after being released from prison.Things go awry, various people lose body parts, and Ed Harris is there, but I can't tell you why without revealing major parts of the plot.

Hey, it's this guy again. Anybody still care?I'll start by focusing on the performances, as they are the real driving force here. The chemistry between the three leads is strong and endearing. The film is so full of bro-love that it makes you wonder what the real source is for all the undertones that are somehow simultaneously homophobic and homoerotic. Wahlberg is particularly entrancing as we first see him as a simple-minded musclehead and slowly watch him turn into an unrepentant manipulative psychopath. However, the real standout here is Johnson, who towers above the others in both stature and performance. The appeal of Johnson is the amount of emotion and humanity he packs into his massive frame, making him suited for "gentle giant" roles, which is how he plays Paul most of the time. However, when Paul falls back off the wagon, and Johnson gets to let loose as a desperate paranoid cokehead, he's completely hilarious every second he's on screen.

The concept of "The American Dream" is pervasive through Pain & Gain, as each character explains in voiceover his or her version of achievement. Daniel's dream is to have a nice big lawn that he can mow, but it's not something he can earn, it's something he feels he must take, because someone else put it in his mind that he deserves it. Bay fills the screen with hilariously overwrought shots of Daniel looking up at or standing in front of an American flag. One of our only female characters is an illegal immigrant who wants to be a movie star, and her only real role in the film is to have other people take advantage of her. Ed Harris is retired, has a beautiful house, and a cherry-pie making wife, and he's bored out of his mind. Why, if I didn't know any better, I'd say that Michael Bay is trying to make a point that The American Dream is a fallacy that doesn't really exist, and that materialism drives too much of our behavior! That can't be right, can it? (It can.) 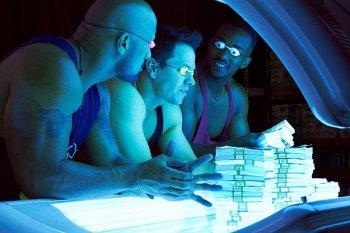 A million dollars isn't cool. You know what's cool? A million evenly tanned dollars.A lot has been said about Bay's "patriotism" in his films, and whether his fetishization of police and armed forces is pure right-wing passion or intentionally over-the-top mockery. In truth, it doesn't matter. I'd argue that this confusion, this bizarre Poe's Law grey area between sincerity and satire where Bay seems to live, is a perfectly American idea anyway. In this regard, Bay stands up there with Scorsese when we talk about directors who really understand America.


In fact, with the glaring exception of Michael Bay's bizarre obsession with homosexuality, this is probably one of the most melting-pot inclusive films you're likely to see in theaters today. A white man, a black man, and Dwayne Johnson team up to steal money from a Colombian Jew with many offshore accounts, played by a Lebanese actor, so that the black man can have sex with his overweight Australian girlfriend (Rebel Wilson), and the white guy and Dwayne Johnson share a relationship with a Ukrainian immigrant stripper, despite one of them being a born-again Christian, and also he's a massive homophobe. All of this is brought about by a motivational speech an Asian dude stole from an AA meeting. If you read that paragraph and said "What the hell is going on in this movie?" then congratulations, you have the fundamental grasp of American culture necessary to watch Pain & Gain.

Essentially, Pain & Gain is a smart, deep movie about stupid, shallow people. Bay takes great delight in playing with his swooping hero camera shots in a film clearly devoid of heroes. He often films Wahlberg from below, like a towering pillar, the same way he filmed Will Smith, Bruce Willis, and even Shia LaBeouf. Yes, there is ONE explosion in the film, and yes, the three leads do walk away from it in slow motion, but one look at Dwayne Johnson's face will make it clear that it's parody. This isn't to say Bay's style is a perfect fit for the story. At times his flashiness and frenzy are overbearing, adding too much to a situation that's already in-your-face. Rather than backing away to let you process the insanity, Bay keeps pushing full-throttle, trying to drive you to epilepsy.

Because of this, most of what makes Pain & Gain so good won't hit you until hours after you leave the theater. While you're in it, you'll be too interested in asking "where is this all going?" to really comprehend most of it. Remember this, though: Most of what you're seeing actually happened. And of course, it happened in Florida. Pain & Gain is the movie version of an outrageous man telling an unbelievable story, and it comes out even better than what you'd expect that to look like.

MINORITY REPORT: I, too, was excited when Michael Bay announced he was returning to Florida to make a comed y/cri me/th rille r. The last time he went to gator country, we got Bad Boys and the slightly inferior Bad Boys II. Together, they represent Bay at his best -- apologies to The "Not Dwayne Johnson" Rock. Then again, I'll support anything that keeps Bay away from CGI robots, even if we're only delaying the inevitable. - Sean "Keanu Grieves" Hanson