EXPECTATIONS: 2012 was The Year of Matthew McConaughey in Cowboy Hats, in which he managed to pull off three career-best performances in films that practically nobody saw (excepting Magic Mike). That said, my hopes for director Jeff Nichols' follow-up to Take Shelter are pretty high. I guess the ultimate question with this film is "Does McConaughey wear a cowboy hat?"

REALITY: And the answer is no, he does not. This time around, Matthew McConaughey doesn't need a cowboy hat to vaguely define his character. In Mud, he's moved on to other articles of clothing, such as a particularly lucky shirt and shoes with crosses nailed into the soles. As the film's titular character, McConaughey is the sort of superstitious shitheel you might find in any work of Southern fiction, and the film surrounding him reflects his character remarkably well. 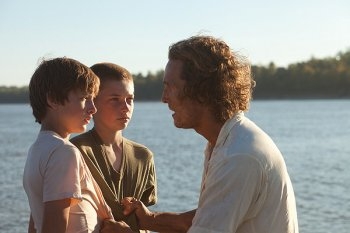 Matthew McConaughey has officially reached the point where shirts confuse and frighten him.As with any good short story, Mud starts with a single, evocative image: Two young boys travel to an island in the middle of the Mississippi River to find a small houseboat stuck in a tree. Ellis (Tye Sheridan) and Neckbone (Jacob Lofland) soon discover that an outlaw named Mud (McConaughey) is living there, waiting for his true love, Juniper (Reese Witherspoon), to join him. Mud hires the two boys to run errands for him; meanwhile, Ellis spies on a family of thugs seeking revenge on Mud for killing one of their own, because it just wouldn't be Southern fiction without some kind of blood feud.

While the plot migh appear to be your typical Southern drama, the world in which Nichols sets his story nearly tells a story all on its own. Mud depicts a dying lifestyle in a dying town. Ellis and his family live in a small home on the shore of the Mississippi River, harvesting fish to sell to local restaurants. At any moment, his parents remind him, the county can tear down their home and force them to move inland. It's the only life his mother and father (Sarah Paulson, Ray McKinnon) know, and any sort of change is altogether terrifying. Ellis' father spends the entire film attempting to impart some kind of wisdom to his son, knowing full well that one day soon everything he knows will become irrelevant.

The overriding mood of this film is a wistful longing for days gone by. And that doesn't just apply to the simple fisherman lifestyle or the romanticized image of the South; Mud is also an ode to first loves and the lessons learned along the way. Following Mud's less-than-helpful advice, Ellis embarks on his own romantic journey with a local high school girl whose honor he defends almost entirely by accident. Ellis is a kid whose only instinct is to do the right thing, even when it means getting socked in the face by a grown man in the middle of a quest for vengeance. It's easy to picture Nichols digging deep into his own past to color in some of these details, though I'm willing to bet he never pissed off Joe Don Baker's entire family the way Mud does.

It's this middle portion of the film where the film really begins to take off. Taking cues from Stand By Me and Huckleberry Finn, Mud is all about the convoluted zig-zagging path that leads to growing up. Everything we thought we knew as a child comes into question: The true character of our fathers, how we define ourselves and the people we love, and what kind of people we want to become. Ellis seems to be following his father's path to becoming a tragic hillbilly stereotype, until he meets Mud and learns the true definition of the word 'broken.' 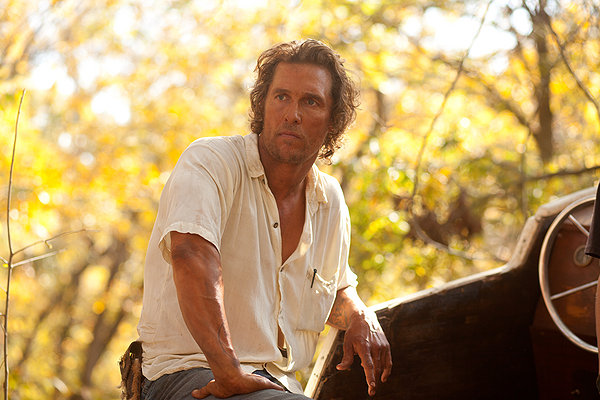 Even as a slovenly redneck, he manages to be a dreamboat.


This is where things get a little sticky, though. Nearly every adult in the film -- Ellis' father, his neighbor Tom Blankenship (Sam Shepard), and Neckbone's uncle (Michael Shannon, having some fun for once) -- warns that the love of a woman is nothing to be trifled with. It's a good lesson for a coming-of-age film like this, but Mud seems to go too far out of its way to constantly compare women to snakes. Mud tells a story of the first time he ever met Juniper: When they were kids, she rushed him to the hospital after he was bitten by a snake, and from that day on she was the love of his life. He reminds himself of this by getting a snake tattoo that winds its way up his right arm.

It would almost be poetic if the analogy weren't so insidious, as the film goes on to show us just how (ugh) poisonous Mud's relationship with Juniper actually is. It's one thing to have a character say you should treat relationships as seriously as a snakebite, it's entirely another to ldemonstrate that lesson with actual snakes. "You can't trust love, Ellis," his father says at one point, nearly patting himself on the back for saying 'love' when he clearly meant 'women'. In a film so richly detailed and carefully written, it's kind of tragic just how forcefully Mud beats that particular drum.

Once again, Matthew McConaughey is in top form, guzzling cans of baked beans and spitting out half-formed platitudes like he was born for this role. Tye Sheridan anchors the film nicely too, making Ellis awkward enough to be endearing, tripping over just enough of his lines to make the performance seem real and not simply terrible. Reese Witherspoon and Michael Shannon are welcome additions as well, but their screentime feels truncated, possibly due to editing concessions for a film that still feels a bit overlong.


Snakes, gun-toting thugs, imminent domain, love and hate factor into this story in equal measure, and it's to Jeff Nichols' credit as a writer that he's able to weave all these things into a film that doesn't feel like a complete and utter cliche. The sights and sounds of the Mississippi River are inescapable, and they provide a rich texture for what easily could have become a caricature of a cartoon Mark Twain already wrote a hundred years ago.

MINORITY REPORT: Jay Dub wrote more than 1,000 words up there and yet -- somehow -- he failed to deliver a Primus joke. For shame. - Sean "Keanu Grieves" Hanson