We're enjoying a small break between blockbusters this week, with The Lucky One getting thoroughly on Joseph "Jay Dub" Wade's nerves and The Raid: Redemption kicking Martin R. "Vargo" Schneider's face clean off his skull.

EXPECTATIONS: The last time I met a Nicholas Sparks film on the killing fields, I was forced to ask questions like "Why does Sparks hate the characters in his own stories so much?" I'm hoping I won't have to ask such questions this time around, as I already know the answer will be "Just because." All I can do now is sit back and watch Zac Efron charm the pants off everyone in the room.

REALITY: Generally speaking, The Lucky One is about as tolerable as romantic melodrama gets without tipping over into "legitimately good filmmaking" territory. The premise is sound, the setting vibrant and colorful, and for the most part the cast rounds out nicely. Where the film tends to stumble time and again is in the many narrative turns we're forced to endure before ending up at something resembling a happy ending. The Lucky One is manipulative and cloying in the worst way, but it's easily a cut above Sparks' recent cinematic outings.

On his third tour of duty in Afghanistan, Sgt. Logan Thibault (Zac Efron) spots a photo of a girl in the rubble. Bending down to pick up the photo saves his life, so upon his return to America, Logan sets about walking from his home in Colorado to a coastal town in Louisiana to find her. That girl turns out to be Beth (Taylor Schilling, hot off the mega-successful Atlas Shrugged), a single mom who runs a dog kennel with her grandmother (Blythe Danner). Logan tries to tell Beth about the photo, but soon finds himself working for her instead, unable to find the right words. Beth's ex-husband Keith Clayton (Jay R. Ferguson), a local sheriff's deputy, finds Logan's presence threatening and would love nothing more than to take full custody of his young son. 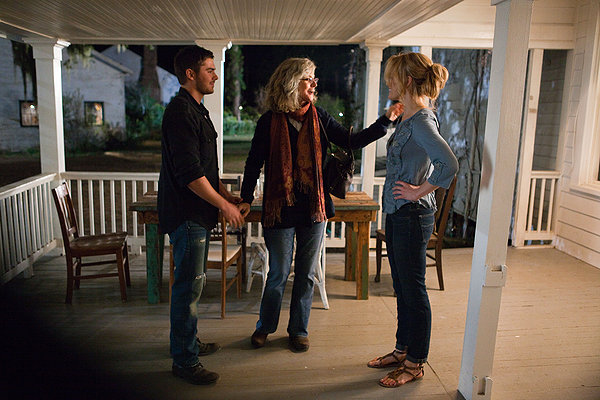 Zac Efron stands stiffly and awkwardly as two actresses do a scene around him.

That last part is crucial, because once it's introduced, it becomes the overarching plot for the entire film. Forget the marine who survived three tours of duty; forget the photograph that saves his life more than once; forget the budding romance between two pretty young people; The Lucky One is really the story of a divorcee who's lucky enough to find the right man who will finally rid her of her bullying ex-husband. I wish I were kidding. For all the time this film spends setting up Logan as a stoic, doe-eyed American Hero, his story is put completely on the back burner once we're introduced to the Clayton family.

At times, it seems like the film knows it's doing this, too. When his character isn't being asked to diffuse another domestic dispute, Zac Efron spends most of the film walking around town and staring at people. Perhaps he's dreaming of a return to normalcy, or perhaps he's really just a creep who enjoys watching people. We aren't granted much insight into Logan's character beyond his status as a veteran, and Efron's stone-faced performance refuses to clue us in. Sure, he's painted as a strong, silent jack of all trades and all-around perfect human being, but you wouldn't know it just by looking him in the eye. It is truly a mystery why Will Fetters' screenplay paints Logan as a mute bystander in his own movie. 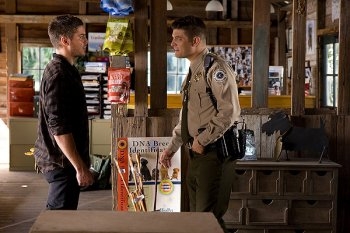 Zac Efron stands stiffly and awkwardly as a police officer arrests him.Perhaps it's because Logan isn't actually the main character of this film. Let's not kid ourselves here, The Lucky One is a Nicholas Sparks film, and Nicholas Sparks films don't exactly cater to all four quadrants. Despite the entire opening act following Logan on his journey from Afghanistan to Louisiana, this is really Beth's film. When she's not tending to her business or trying to keep her son away from his dad, she ogles Logan doing menial chores, discusses him with her grandmother, and seems to run through the entire Romantic Playbook all by her lonesome. If Logan is the focal character, Beth is without a doubt the audience surrogate.

To her credit, Taylor Schilling is good in the role. In a film full of competing displays of masculinity, Schilling plays Beth as a surprisingly strong character. Conceivably, she would have no problem living without either Logan or Keith. As it turns out, the rest of the cast is quite solid as well, save Efron's stilted performance. I applaud his effort to branch out, but he's better than this. Engineers built Channing Tatum out of shoeboxes and K-Mart deli meat in 1980 so that better actors wouldn't need to waste their time with this sort of thing.


The Lucky One ends in tragedy, as most of Sparks' stories tend to do. And while it played out as every bit the manufactured melodrama I've come to expect from Nicholas Sparks, I found it amusing that this particular ending bore a remarkable resemblance to the finale of Marmaduke. Because the novel this film is based on predates that film by two years, I can only assume that the makers of Marmaduke looked to the pennings to Mr. Sparks to close out their sustained fart of a movie on the highest note possible. Well played, gents. Well played.