EXPECTATIONS: The internet has been losing its collective mind over this film since it was brought to the states, but the internet also went batshit insane over little girls' cartoon ponies, so the internet has had its opinion privileges taken away for a while. In all seriousness, I'm a little worried that all the good things I'm hearing about this film -- like how it's "The Star Wars of Action Movies" -- come from the kind of people who tend to latch onto anything remotely related to Asian culture. (These are also the kind of people who hate Star Wars now, come to think of it.) On the other hand, this is a brand new Kung Fu movie. Kung Fu movies are awesome, so what am I complaining about?

REALITY: Somewhere down the line of criticdom, I became cynical about action movies. This is probably due to the fact that many of them are, well, bad. Whenever one criticizes the genre, however, they're met with the same posturing defense of "Well, what do you expect?" And so I've struggled to answer that question, wondering what exactly I want, knowing that it was "a dude punching another dude." It turns out the answer is "a dude punching and kicking another dude really hard really fast a whole bunch of times." Looking back now, it should have been obvious. 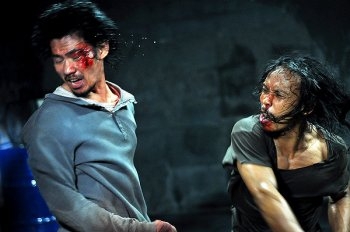 POW!Most of this punching and kicking comes from Rama (Iko Uwais), a member of a rookie Jarkata SWAT team that is sent into a slumland apartment building to capture druglord and gang leader Tama Riyadi (Ray Sahetapy). Once inside, they find themselves surrounded by nearly every criminal in the city, all of whom have been well-armed and organized by Tama and his two bodyguards, Mad Dog (Yayan Ruhian) and Andi (Doni Alamsyah). Outnumbered and without reinforcements, the team makes its way through the building in increasingly violent fashion.

From a strictly technical standpoint, The Raid is a marvel of filmmaking. Every fight scene is carefully choreographed and staged in a manner that must have taken weeks of planning and rehearsal, but flies by in an exhilarating matter of minutes. Fortunately, there are a lot of fight scenes, in an attempt to keep up with the film's excellent sense of pacing. Like boxers returning to their corners after each round, The Raid's formula is simple: Short fight, move the plot for a few minutes, long fight, move the plot, short fight. In a movie this claustrophobic, set design plays a large role, and here the different floors of the building represent different short term goals. In fact, forget that boxing analogy I just made, it's like a video game. We reach a level, dispose of the minor enemies, take a breather, then fight "the boss." When you're updating the classic Kung Fu movie formula for a shorter-attention-span generation, this is the way to do it, without getting all Scott Pilgrim pseudo-ironic audience-winking about it.

If you get a chance during The Raid, count the number of seconds during a fight between when a shot starts and when it cuts away to another camera angle. In an age where the idea of making cameras shaky and blurry for no reason but to add "realism" has graduated from "fad" to "trend" to "somehow legitimately recognized technique," it's refreshing to see a film that's content to hook up a steadycam and just follow along, letting us watch the fighters actually, you know, fight. Realism is overrated, anyway, at least as far as the action genre is concerned. There are literally thousands of places you can watch people actually fight, from professional UFC matches to the Home Furnishings department of Walmart the day after Thanksgiving. We don't come to movies for that, especially not Kung Fu movies. This is a genre where a man can crash a cop car into a helicopter and we don't even shrug. Realism has no place here. 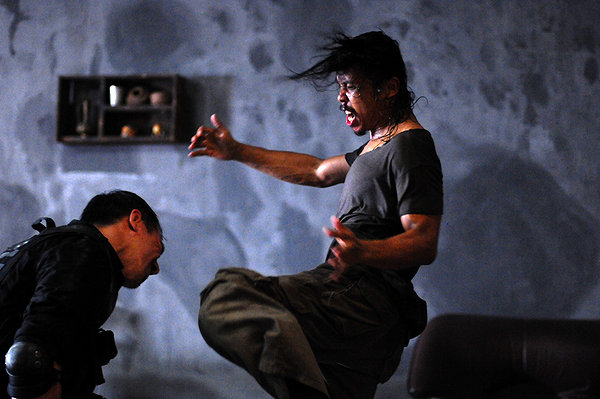 However, what's just as impressive is the way The Raid treats the moments in between fight sequences. I'm not exaggerating when I tell you that The Raid uses its soundtrack and the presence and absence of sound to support the story as well as The Artist does. When the film decides to slow the pace down, which it does surprisingly often, every noise becomes important, representing a subtle shift in character point of view each time. When an explosion mutes everything for a character, or when a group of people hold their breath in hiding, the sound of a table being picked up and put down, or the echo of a doorknob turning in an empty hallway become tension builders. Just like the fight choreography, the smallest details become crucial to the scene as a whole.

It's been said online that The Raid sacrifices plot and characterization for more and more violence, a criticism I believe is unfounded. The characterization isn't particularly deep, but to say it's not there is to ignore crucial parts of the movie. In addition, the acting supports these roles perfectly. Ray Sahetapy in particular is massively entertaining as the sociopathic, calculating villain. The best moments of the film involve him approaching the battle like a messy business transaction, trying to figure out how much this is all going to cost him. To give you a better imagining of this, when the inevitable American remake comes, he should be played by Mickey Rourke. 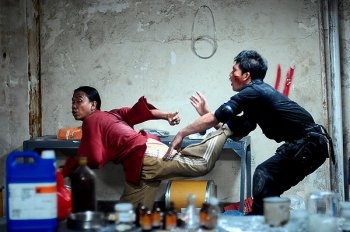 KERACK!What's most notable about the character points that we're complaining about is how many of these cues are taken from our own films. We know that Rama is the good cop three minutes in because he's shown with a family, including a pregnant wife. It's not exactly original, but it works. Why? Because we've done it with our own films. If we as American movie-goers don't like it, it's kind of our own fault. Where did you learn this, director Gareth Evans? Who told you about this? "I learned it from you, okay? I learned it from watching you!"

The concerns about the plot are a little more legitimate. There's not much here beyond "Let's go get the bad guy! But what if one of US is the bad guy?" The incredible brutality from the team is supposed to express the film's point that the side of "good" can be just as bad as the side of evil. Bad guys can be good in their world, good guys can be bad, every cop is a criminal and all the sinners saints, the real truth is in the middle guys.

A foreseeable connection between two characters just serves to hammer home this point, which is honestly fairly easily defeated. Sure, the cops are using excessive force, but that concept kinda goes out the sniper-covered window when we factor in that there are literally dozens of men who want to kill them. Strangely, the film could be presented with a Ron Paul-Libertarian reading, since all the tenants who are arrested before the fight starts are minding their own business, innocently smoking crack. Tama is just an productive businessman, and if the police state wasn't trying to regulate what he does with consenting adults in his own private property, none of this would have had to happen. Am I reading a bit too far into this? Maybe, but we did say we needed more than just punching.

MINORITY REPORT: It's odd seeing action movies get compared to video games when you consider that almost every video game is just an interactive version of Commando. - Ian "Professor Clumsy" Maddison

"Clever plot"? "Three-dimensional characters"? What the fuck, Hanson, you used to be cool. Ever since you started hanging with these eggheads, you've turned into a real bookworm sister. Look, I've heard this movie has some sweet fucking fights, blood everywhere, and -- oh wait, subtitles? Fuck it. -David "Data Core Devil" del Vacoté III