EXPECTATIONS: Aside from the fact that this is the last time we'll ever see James Gandolfini on film, The Drop looks like it should have been dumped in the middle of January. Generic crime thrillers love that time of year. Oscar season is well underway, so everyone is too busy officiating that horse race to notice how boring these things usually are. Maybe I'm being too harsh, though. It's hard to go wrong with Tom Hardy or Noomi Rapace, so maybe this film will surprise me.

REALITY: Allow me to amend my earlier statement. The Drop would actually have been a perfect film to release in the dead of winter. That's not to say it's bland or poorly made; quite the opposite, actually. The film takes place between Christmas and Super Bowl Sunday, and perfectly nails the malaise that sets in among the foggy landscape of a snow-covered suburb. Every grocery store has banks of muddy snow piled up in the parking lot, and half the town still has Christmas lights up for some stupid reason. This film paints that kind of picture beautifully. It's a story about that gray area between right and wrong, and generally works more often than it doesn't. 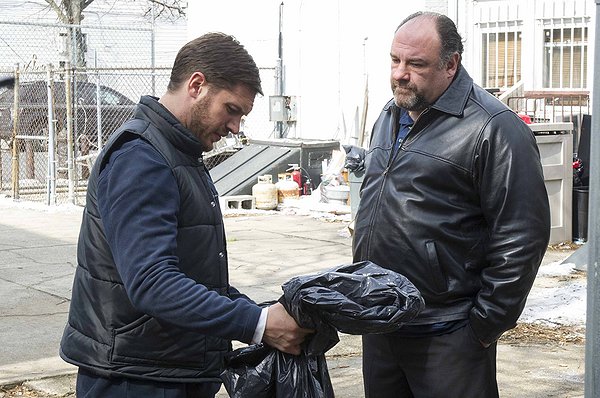 "I don't know about you, Marv, but these gains look ill-gotten!"

Based on a short story by Dennis Lehane, The Drop takes place at Cousin Marv's bar in Brooklyn. Marv (James Gandolfini) and his younger cousin Bob (Tom Hardy) run the place for the Chechen mob, who use the bar to occasionally drop off their ill-gotten gains. They have their eye on the bar after a robbery takes place under dubious circumstances. Bob ID's the guy who did it, which leads the Chechens to assume Bob and Marv are in on it. Marv begins looking for a way out of the life he's wound up in, meanwhile Bob takes in a wounded pitbull puppy he discovers in a garbage can outside the house of a local woman named Nadia (Noomi Rapace).

That last part seems kind of superfluous (and, it should be noted, is the only way to fit Noomi Rapace in that paragraph), but it winds up driving much of the plot. Despite the larger story about Cousin Marv and the mob's stolen cash, Bob's story becomes much more about building a normal life within the criminal system that surrounds him. Soon, Bob is stalked by a deranged crook who claims the dog belongs to him. This man also turns out to be Nadia's ex-boyfriend, and has designs on making Bob's life a living hell. Bob, a quiet man who knows well the value of looking the other way, is forced out of that habit to protect those around him. 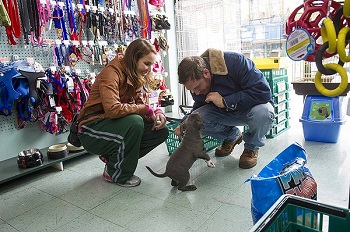 Aww, what a cute little plot device.At times, the plot feels fairly trite, but then The Drop deals in the more mundane details that so many gaudier crime films tend to overlook. Everyone is having a hard time in this film. Regulars in Marv's bar are out of work, some don't even have the money to pay for their drinks. Marv gives Bob shit for giving free drinks to an old lady with nowhere else to go. Even the church Bob attends is in danger of shutting down to be turned into condos. So when two random thugs rob Cousin Marv's for only the money in the register, everybody takes notice. Grandiose crime dramas make good fantasies for us regular jerks, but sometimes it's hard to connect with the high rollers and tough guys. This film's air of desperation helps ground it and makes its characters, even the obvious scumbags, just a little more relatable.

A majority of the film falls on Tom Hardy's shoulders and, generally speaking, he carries things well. Bob is a guy with a lot of bad shit on his mind, and it shows. He puts up a faintly vacant front to make him seem less culpable in the crime that goes on in the area. The cops buy it. The Chechens buy it. Even Marv buys it. But when Bob is alone, that front stays up. At times it feels like overkill on Hardy's part, almost like he can't get Bob to break character. It makes Bob difficult to read sometimes, but then Gandolfini's Marv does more than enough emoting for the two of them.

There isn't too much to say about this film without blowing anymore of the plot. Not to say there's a dramatic third-act twist that changes everything we thought we knew. The Chechens aren't really the FBI, Marv isn't secretly a Russian sleeper agent, and Nadia isn't suddenly revealed to be crucial to the plot. (Noomi Rapace has tragically little to do in this film, as it turns out.) That said, The Drop eventually ties everything together in a third act that feels satisfying, even if this whole crime saga winds up being a tale of a grown-ass man and his tiny little dog.

MINORITY REPORTS: From somewhere down in the special place in Hell reserved for the screenwriter of Blank Check, Blake Snyder is smiling approvingly at your closing paragraph. Save the dog, Tom. Save the dog. - Sean "Keanu Grieves" Hanson

I hate that I've never visited NYC and don't know how it feels to threaten people in a bar, grab a slice of pizza, then go to the local Catholic church to pray it out. - Jordan "CloseFriend" Saïd