It's "Movies Nobody Has Ever Heard of Week" here at Current Releases where we take a look at some of the more obscure films that have crept out, not all for the better (but mostly).

EXPECTATIONS: The premise of this film sounds absolutely insane: Scarlett Johansson is a space alien who murders Scottish men by luring them into her van. Everything I'm hearing suggests that is a hypnotic work with a mesmerising performance from Johansson, but it's still a movie about a space alien harvesting Scottish organs and more specifically a film about an evil seductress that could end up being troubling in its implications.

REALITY: Under the Skin is the kind of film that sneaks up on you when you least expect it. As silly as its premise may be, this is disturbing and horrifying film and a far cry from the sort of alien invasion wackiness you were perhaps anticipating. Under the Skin is a frightening mediation of what it means to be a human from an alien perspective. It left quite an impact on me.

I'm not getting into the whole mirror thing again.


Scarlett Johansson plays an unnamed extraterrestrial creature, disguised as an attractive young English woman. She drives a van around the outskirts of Glasgow in search of lonely men who she then approaches, seduces and leads into a vat of mysterious liquid. That's basic premise right there, although you are largely left to piece it together yourself as you watch Johansson go about her business.

A great deal of the first act of Under the Skin is footage acquired by director Jonathan Glazer of Johansson approaching non-actors in the street. She flirts through impenetrable Scottish accents and comes on strong and it's interesting to see how these people react. Some of them are arrogant, taking her compliments and offering nothing in return; some are amusingly oblivious to her come-ons, offering directions and polite small talk. I know what all the young men out there are thinking, "Oh, I'm sure Scarlett Johansson has trouble luring men into her van," but the reality of the situation depicted here is very different. The men are unassuming, certainly, but it's interesting that nobody identifies her as Scarlett Johansson. The best disguise for a Hollywood movie star, it seems, is to drive a van around Scotland coming on to average blokes. Nobody would believe or even suspect that it was really you.

All of this raises a very interesting question, though. Reverse the gender roles and see what happens. Imagine Ryan Gosling is driving the van and picking up young Scottish women. Any one of them would have to be insane to get in a van with a strange man, even if he looked like Ryan Gosling. The reaction of the audience would be different too. Can you imagine a scenario in which a woman agrees to get into a van with Ryan Gosling, is led into a weird vat and then isn't judged by the audience in some way? Well, that's what you get, they'd think. In the case presented in Under the Skin, there is no expectation to blame a man for getting in that van if he thinks he's going to get laid. In fact, if Johansson weren't a murderous space creature we would see her situation as being one that puts her at risk more than anyone else. Given the way the situations turn out, though, we can't help but reverse that expectation to the point where an erect penis, in this film, is an image that denotes vulnerability. 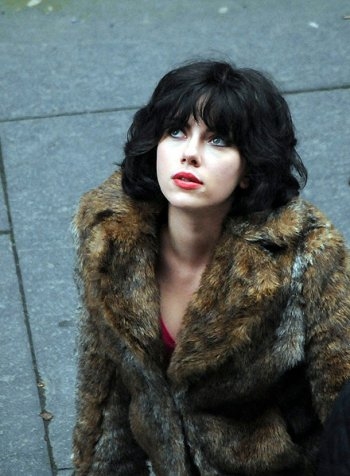 It's a sci-fi movie. I promise.This interesting reversal of ideas is much easier to swallow when you consider Under the Skin's narrative perspective. The unnamed alien, who for the sake of simplicity we'll refer to as Scarlett, is seen initially as frightening and inhuman. She is an evil seductress, whose body is eroticised and objectified as she leads men into a strange mirror-surfaced liquid. She walks over the mirror pool and the human men sink into it as they move towards her. She stands in various states of undress and urges them on until they are submerged. But, as time goes one we start to empathise with her. Her seductive actions seem mechanical, rehearsed and impersonal, rather than evil or at all motivated by selfish desires. A montage of Scottish people doing normal Scottish things like smoking cigarettes and eating pasties while a confused Scarlett watches on without any understanding starts to turn our empathy around. The humans begin to feel alien and we empathise with the alien creature more and more.

A pivotal encounter with a physically deformed man sparks a change of heart in Scarlett. She sees, for the first time, a glimmer of something she can relate to in this man who avoids human interaction and has never experienced any intimacy with anybody. He is played by Adam Pearson, an actor whose facial disfigurement is the result of neurofibromatosis, and a man who most certainly understands the prejudices and difficulties of being seen as less than human. In Scarlett's eyes, he is simply another human at first, until she sees the impact her compliments have one him. She tells him he has beautiful hands and offers to drive him to the local Tesco. For the first time, her practiced eroticism starts to look like genuine kindness and she has a crisis of conscience.

Slipping away from the mysterious motorcycle-riding alien janitors who observe and clean up after her, Scarlett starts to live as a human and soon finds that no matter what she may have done to the men she picked up earlier in the film, it is nothing compared to the victimisation that women face every day in our society. A young woman cannot take a walk alone without being in danger of predatory men. Under the Skin shows an understanding of these issues that are ably portrayed via Johansson's brilliant and personal performance.

Johansson carries a great deal of the film on her capable shoulders and Glazer makes excellent use of both her talent and status. Of course she is considered the most attractive woman alive and it is certain that many misguided young men will see this movie on the promise of her nude scenes, but I defy anyone to biff one out with Under the Skin lingering in their immediate memory. The film highlights the difference between eroticism and actual sex. Eroticism is about objectification and longing, while sex is about a human connection. In the second act, Scarlett scrutinises her body in the mirror, hoping to understand the form she has been lumbered with for the first time. Shortly after, an actual sexual encounter does not go to plan. How many young women can relate to this, being thrust into the world with no real understanding of their bodies or sexuality? Young girls are left to "discover" their vaginas and the actual workings of their sexual nature is considered taboo. We see this alien creature in a female human body going through a similar crisis of self identity. 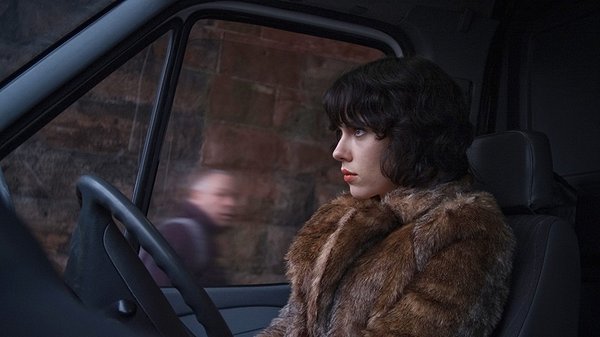 
At its heart, Under the Skin is about the way our society mistreats and undermines women to such a degree that it is ingrained. Men go through life oblivious, we have that luxury; women go through life and daily experience fear, harassment and punishment just for being a woman. Scarlett's ultimate undoing comes not from her being an alien or as comeuppance for any of her actions, but simply as a result of her being a woman who simply did not know this.

Under the Skin very definitely holds cinema, including itself, partly to blame for this issue. Obsessed with its own artform, Under the Skin is what the great film critic Sir Christopher Frayling would describe as "critical cinema," being a film that casts a critical eye over itself. The opening sequence displays a beam of light refracted through a lense, mechanical shapes moving together smoothly and finally forming an eye which stares back at us. While this is happening, we hear Johansson performing vocal exercises; vocalising, we assume for the first time, various syllables and short words. The first word she fully forms is "film." Glazer makes every effort to draw attention to the artifice of his own cinematic trappings, even through his naturalistic, documentarian approach. Under the Skin proposes that cinema needs to mature a great deal before it can truly begin to tell real stories about real people. This is critical cinema at its most self-deprecating.

MINORITY REPORT: You're kind of wrong about that Ryan Gosling thing, though. Right now on Twitter there are thousands of women condemning a 17-year old girl for NOT immediately going to a hotel room with a strange 35-year old that hit on her over the internet, because that 35-year-old happened to be James Franco. So let this be a lesson, ladies: You can't win. Ever. - Martin R. "Vargo" Schneider