Edge of Tomorrow; The Fault in Our Stars

This week, Current Releases is playing catch-up with the weekend's two big blockbusters. First up, Martin R. "Vargo" Schneider tells us all about this little indie sci-fi flick called Edge of Tomorrow. Then, Joseph "Jay Dub" Wade gets his cry on with The Fault in Our Stars, the huge, effects-driven extravaganza currently flipping tables, breaking windows and setting the box office ablaze.

EXPECTATIONS: Right before Mission: Impossible III came out in theaters, I watched the trailer on repeat for days just to see the one moment when a random explosion sends Ethan Hunt/Tom Cruise flying face-first into a car. It was the perfect match of silliness and violence coming together to inflict itself on the world's most punchable face. Like the guy hitting the propeller in Titanic, but with a guy you personally would like to slap. Don't get me wrong, I like Tom Cruise, especially career-resurgence Cruise that doesn't take himself so seriously. It doesn't change the fact that he has a particularly bad case of the smugface. What I'm getting at here is that Edge of Tomorrow (AKA All You Need is Kill AKA LiveDieRepeat, both of which are better titles) is like someone took that one moment and stretched it into two hours, and I can't actually imagine a way that's bad.

REALITY: Part of why I love the recent work Tom Cruise has done is that he's finally embraced the silliness inherent in being Tom Cruise. He's an action star in his early fifties whose major gimmick is "running intensely" and who never really seemed like he should have been an action hero in the first place, and in his spare time he is a high-ranking member of a sci-fi cult who worships dinosaur aliens. Tom Cruise's entire existence is ridiculous, and it's like since Tropic Thunder he's finally come around to realizing it. That's why films like Edge of Tomorrow and Jack Reacher work, they take Cruise's persona and go so over-the-top with it that it borders on comedy. In fact, Edge of Tomorrow doesn't even border, it is a flat-out dark comedy which also has a bunch of explodey bits.

Don't look so confused, Tom. It only gets worse.

Cruise plays Army Reserve Major William Cage, a marketing shill who promotes and positively spins the combat operations of the world-wide military group United Defense Forces as they fight off an invading alien force which has taken over most of Europe and Asia, and presumably the Americas as well. After he alienates the wrong General (Brendan Gleeson), Cage is stripped of rank and forced to the front lines of a sci-fi Normandy Beach invasion, where he and everyone else involved is quickly slaughtered by the aliens. Cage dies covered in special alien blood, which grants him the ability to restart time by a day, which he triggers by dying. (This makes more sense in the film, trust me.) As he Bill Murrays his way through the invasion, Cage eventually connects with Rita Vrataski (Emily Blunt), a celebrity super-soldier who once possessed the same power, and together the two plan to find a way to end the war.

Maybe I should have seen it coming from the Groundhog Day-premise, but Edge of Tomorrow is unexpectedly a very black comedy with well-timed editing. Most of our training montage and entire second act is punctuated by increasingly-hilarious Cage deaths, most of which are at the hand of Rita herself. Emily Blunt portrays this in a fashion which is amusingly& well, Blunt, and the film's best moments are when one or both of them die, and Cage isn't even scared or upset anymore, he's just so damn exasperated. The idea of a man who is just tired of dying is so inherently silly, I can't really see how this film would have worked if it tried to play itself seriously. 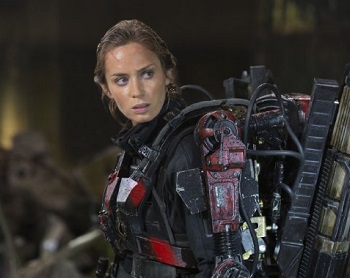 That's right, Emily. "Time travel blood."This isn't to say that the action scenes or any other element of the film are lacking. I've spoken before about how much I love the concept of "cinematic geography," wherein a set designer and director align to make sure that the simple idea of "where the hell everything is" is made clear to the audience. As we re-live and review the beach battle multiple times, the entire success of the character's mission - and therefore the film itself - is completely dependent on this being tight. Playing with the themes of time-bending, the film has an intentional anachronistic tone, being intentionally reminiscent of WWII beach warfare, combined with futuristic battle-mechs and Final Fantasy-style Buster Swords, all of which seem to fall by the wayside as soon as we're off the beach and see a very contemporary trailer park, and our heroes make their escape in a mid-90s minivan.

All together, Edge of Tomorrow is solid summer entertainment fare, with great performances and chemistry all around. Particularly of note is Bill Paxton as a well-rehearsed sergeant, because somehow Paxton has slipped into this "character actor" role which makes me actually interested to see him in movies. (This is the only time anyone has ever had this feeling about Bill Paxton.) I also want to note how much this film relies on Blunt's character performance being consistent and solid. Cage needs Rita to be his one point of reliability through his trial-and-error, and Blunt's performance as a stern soldier is perfect throughout. Combined with strong sound, interesting visuals, and unique alien designs, Edge of Tomorrow is worth the watch-evaluate-repeat.

MINORITY REPORTS: This movie was even more ridiculous back when I thought the idea was that the military kept sending all of its soldiers back in time to try and win the war. "Alien blood that grants time travel powers" makes so much more sense, and I honestly cannot believe I just said that. - Joseph "Jay Dub" Wade