EXPECTATIONS: You know, the cabin in the woods is probably my favorite location for indie horror flicks. On a thematic level, there's an immediate sense of familiarity and isolation. When I was a kid, my grandpa had a fishing cabin, and the nightmares I had there were more vivid, driven by the crickets and the quiet of the surrounding woods and the knowledge that, if something were to happen, half of the neighboring cabins were empty. There was no guarantee of help or safety. But there's an added benefit to shooting in such places: It's easy to make a good-looking film on the cheap, and a good reason to focus on a limited cast without peppering the background with extras. Honeymoon is just the latest film in the subgenre, and the (spoiler-ish) trailer is promising.

REALITY: Honeymoon begins with the videotaped testimonial of newlyweds Bea (Rose Leslie) and Paul (Harry Treadaway), which is a neat excuse for co-writers Phil Graziadei and Leigh Janiak to establish how they met, their personalities and quirks, how Paul proposed, how much they love each other, etc. The testimonial concludes with a seemingly innocuous line that grows troubling, the more you think about it: "Before, I was alone. Now, I'm not." Bea says this tenderly, and kisses him afterward, and you can almost forget that that's a weirdly self-centered thing to say to the man you just married. 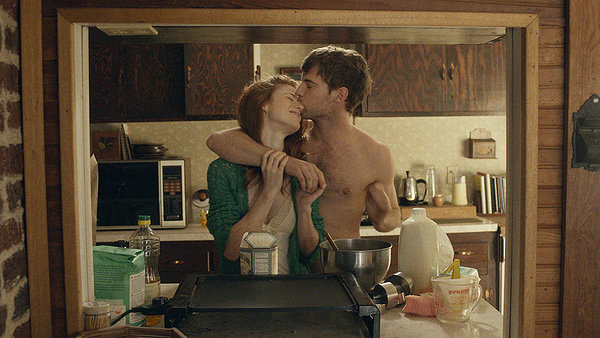 Young newlyweds, a cabin in the woods, and a burning skillet. What could go wrong?

Soon, Bea and Paul are driving out to her family's cabin to consummate the marriage and do a little fishing, maybe simultaneously. There, they visit a general store staffed by Bea's "childhood friend" Will (Ben Huber) and his girlfriend Annie (Hanna Brown), both of whom seem strangely agitated, bordering on psychotic. Will grows suspicious of Anna, who begins sleepwalking and complaining of headaches to short-circuit any possibility of sex. She admonishes him for reading her subtly disturbing journal entries, and her thighs are suddenly marked by not-quite-mosquito bites. He spends more time away from the cabin as a gulf grows between them. Is the conflict (and the horror) all in his head?

It's a somewhat creaky, none-too-original premise, elevated by Leslie and Treadaway, who are better at grounding their characters and developing a reasonably convincing romance that persists through incredible circumstances than they are at hiding their accents. She's Scottish, he's British, but their questionable American accents add to the mysterious atmosphere, especially considering the kind of horror film in which they find themselves.

Janiak, making her directorial debut, packs the first two-thirds of Honeymoon with moments like this. Sometimes, the film calls attention to its dialogic strangeness, as when a post-coital Paul tells Bea to sit down and "rest your womb." Most of the time, though, there's an ominous devil's-in-the-details undercurrent to this cabin-in-the-woods couple's horror drama that goes unremarked. This is a film that rewards a man for paying attention to his wife's menstrual cycle and mannerisms. 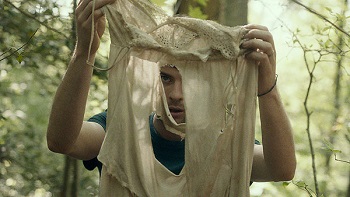 Well that's not a very good sign.But if last week's The One I Love played like a particularly good episode of The Twilight Zone, Honeymoon dives into David Cronenberg territory during its final act. That's a misstep. Don't get me wrong: Normally, I enjoy that moment when horror films go off the rails, probably for the same reason that I rooted for Dr. House to relapse throughout the sixth season, but Janiak does such a good job building a mood of isolation and setting up the film's mysteries - that the actual resolution and the sudden tonal shift is disappointing. It's like trying to cram all of Le boucher and the last hour of Antichrist into a paltry 87 minutes.

To its credit, though, Honeymoon provides the kind of singularly shocking scene that can sear a horror film into memory. The Exorcist had "let Jesus fuck you" and The Shining had the Jack Torrance/bloated corpse makeout session. Honeymoon serves something up that's equal parts Shivers and Cabin Fever, the kind of moment that's best viewed through parted fingers, even if it capitalizes on the VAGINAS ARE ICKY AND GROSS! mentality that's generally the province of male directors.

Whatever its faults, this is light years beyond last year's Evil Dead remake and a welcome throwback to the character-driven relationship horror that informed Don't Look Now and Knife in the Water. So far, I've name-checked at least a dozen movies while writing this review, and for a very good reason: Obviously, Janiak has studied the classics. Although there's nothing particularly new in Honeymoon, this is an admirably solid approximation of what worked so well in the films that came before.

MINORITY REPORTS: Honestly, it just sounds like at this point you've seen so many VOD horror movies all year that they're all blending together and this is just the mash-up of all of them that your brain has come up with. Is this even a real movie? - Martin R. "Vargo" Schneider

With my dating history, until I read this review I had this pegged as some sappy romcom. - Jordan "CloseFriend" Saïd