EXPECTATIONS: I initially planned on getting a feel for the Dolphin Tale canon by watching Dolphin Tale 1: First Blood. But all of a sudden, life just seemed too short to watch two saccharine kids' movies about delphine amputees in one week.From what I understand, Winter - the dolphin from the first film, a real dolphin who lost her dorsal fins at a young age - will get repo'ed if she doesn't get a dolphin BFF in 30 days. Sawyer (Nathan Gamble), the kid protagonist of the first film, plans to save the day by assembling the crew from the first film for a critical mission. Step 1: Get another dolphin. Step 2: Look at the two dolphins and smile amidst inspirational music.

REALITY: In The Untouchables, Charles Martin Smith played an untouchable who turned out to have the most important things to say, but nobody took him seriously. It appears that gave him the idea for writing and directing Dolphin Tale 2: Children of Authority. 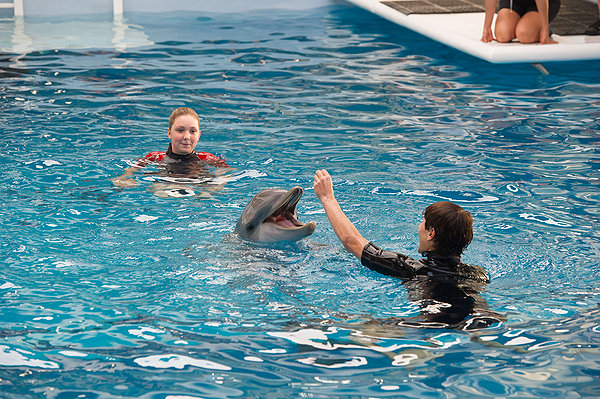 Dolphin looks pretty happy to me. What's the problem?

This film plays by all the kid-movie rules. Harry Connick, Jr. plays Dr. Clay Haskett, the head honcho at the Clearwater Marine Aquarium (essentially a hospital for dogs and cats of the sea). The two teenage protagonists, Sawyer and Hazel (Cozi Zuehlsdorff), have roles of authority. They have all the answers. They each have a single parent who dotes on them and puts up with their shit. Sawyer makes documentaries and lectures volunteers; all the girl volunteers in his age range visibly have a crush on him. Hazel lives in a boathouse. (What kid hasn't wanted to live in some shaky structure inside a tree and/or ocean?) They clearly love each other but never admit it.

So Dolphin Tale 2 takes these children of authority and puts them in a situation that will test every inch of their resolve: Their dolphin feels lonely.

To condense the first half of the film, Winter needs a roommate. Smith inserts himself into the film as a USDA inspector who threatens to move Winter if the aquarium's staff fails to find her a friend. To ratchet the tension further, Sawyer gets a prestigious scholarship that only an idiot or an adolescent lost in puberty would pass up. 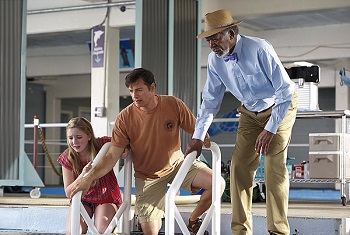 The whole series is a scheme to throw Morgan Freeman into a pool.

Both of these "conflicts" come with toothless ticking clocks. Smith's direction never makes the passage of time clear, so the tension of time consists mostly of our teenage heroes vacillating as the adults repeatedly scream, "You need to make a decision soon!"

As for the other conflicts & Hazel suffers a paroxysm of entitlement when the time comes for a healthy dolphin to leave their animal hospital for the wild. Hazel responds by ignoring her father and wondering why he doesn't listen to the words she doesn't say. (Fortunately for Hazel, the dolphin later appears in the Gulf of Mexico, so that dolphin will probably check back in real soon.) Tom Nowicki plays a Richard Branson-esque investor who nags the characters about making Winter happy up or else. Fortunately, the parent characters - played by Connick and Ashley Judd - avoid conflict by indulging their kids' hormonal myopia and recalcitrance. With that parenting style, I hope Sawyer's scholarship has a "temper tantrum" clause.

As for the central conflict, the staff find a dolphin named Hope who, like Winter, can't go back to the wild. Will they get along? Because if they don't, Winter has to leave and, as the star attraction, her absence will probably sink the aquarium. 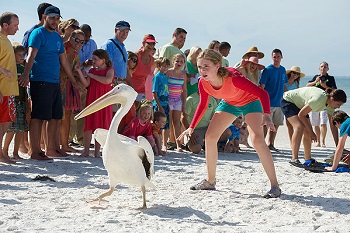 The pelican's an asshole, but at least he doesn't talk.

Look. I love animals. But if "two animals like each other" sounds like an exciting climax to you, congratulations on having a higher boredom threshold than me.

Throughout this absence of tension, the characters make it as clear as possible that this story really happened and the real Hope and Winter live in a tourist attraction that wants your money. The characters do everything to promote Clearwater, short of turning to the camera and saying, "Man, I just don't know if we can save Winter, our star attraction at the Clearwater Marine Aquarium in Clearwater, Florida, where you can visit for the low, low price of $20 per person! While I struggle to overcome the communicative barrier between our two dolphins, don't forget to visit our gift shop and buy your loved one our Clearwater edition of Monopoly for just $45! Clearwater Marine Aquarium: Rescue, Rehab, Release!"

I don't exactly care for films encouraging kids to beg their parents to spend money. I do like that the film encourages adults to listen to adolescents, but like most of the weakest children's films, this one assumes that kids have all the answers and all our problems would go away if adults would just shut up and listen to them. But considering how close these kid protagonists come to blowing huge opportunities by missing deadlines, there still exist some pretty good reasons why our society doesn't work like that song "The Greatest Love of All."