This week, Joseph "Jay Dub" Wade and Robert "Macrame_God" Seeders hold a united front against Hollywood's winged invaders, managing to sit through the entirety of Legion and The Tooth Fairy, respectively.

Expectations: After studying the trailer for Legion with my crack team of cowboy librarians, I've concluded that this movie will deliver one of three things: A) A tongue-in-cheek remake of the classic Christopher Walken abortion The Prophecy; B) A complete and utter mistranslation of the Book of Revelation; or C) a brainless action fest with a higher bullet/explosion/body count than the inevitably forthcoming Rambo: Fifth Blood.

Reality: The correct answer, as it turns out, is D) None of the above.

Sure, Legion goes heavy on the gunfights, references to other movies, and shades of New Testament apocalypse, but it still somehow manages to be something else entirely. Namely, it's exactly the kind of R-rated action pap that always gets shat out this time of year to help the prestigious Oscar contenders look more prestigious and Oscar contender-y. I'm 100 percent positive that this is Legion's sole cinematic function. 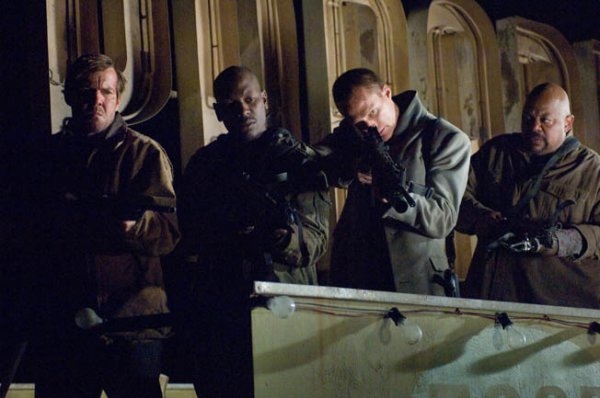 An exclusive new screenshot from the upcoming Left 4 Dead 3!

The film opens two days before Christmas, as the angel Michael (Paul Bettany) descends upon the subtly named Nevada-desert diner Paradise Falls. He takes it upon himself to protect a waitress named Charlie (Adrianne Palicki) and her soon-to-be-born child. Michael explains to the employees and customers that humanity has become a cesspool and God is fed up with it. What's coming is not so much a rapture or apocalypse as it is "an extermination." For reasons unknown even to the movie itself, Michael must protect Charlie's baby if humanity is to survive.

And how does God plan to carry out this species-wide genocide? By sending His army of angels? How about by repeating the ten plagues of Egypt? If you've seen the trailers, you might say, "Yeah, He sends angels and plagues!" Nope. Not really. A multitude of angels fly around for a moment or two, sure, and our heroes are met with a giant swarm of flies, but neither of these things really register as the full wrath of God. Instead, God's master plan is to possess human bodies and turn them into ravenous demon-monster things. It's sorta like how in The Matrix, random people turn into Agents when the plot demands it. The visual effect even kinda looks the same. No, there's no 'kinda' about it. It's exactly the same. 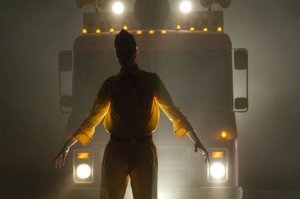 Dude! Truck! Behind you! Truck! TRUCK!The only flaw in God's brilliant plan is that possessed humans are still humans, and they fall prey to gunfire just as easily as the rest of us. This allows our heroes (among them Dennis Quaid and a hook-handed Charles S. Dutton) to mow down wave upon wave of demon folk with a full armory of machine guns. Look, if God really wanted to exterminate the human race, He could have dropped an asteroid the size of France or turned the common cold into Ebola. He could've snuffed out the sun or made us all allergic to air. He literally could have done anything He wanted to kill us off, but instead He recycled the plot from Doom 3. If I were the Pope, I'd seriously consider excommunicating screenwriters Peter Schink and Scott Stewart for insinuating that God is a lousy military strategist.

That, in a nutshell, is really the worst thing about Legion. You can't reasonably expect your audience to accept God the Almighty as a serious villain in the first place, but to paint Him and His motives as petty and simplistic is just insulting to everyone involved. Also, the rest of script was apparently written by someone whose idea of background research is consulting Wikipedia. Michael and Gabriel are the only two angels mentioned in the New Testament, but just because Wikipedia said so doesn't mean you have to make them the only non-human characters in your movie. 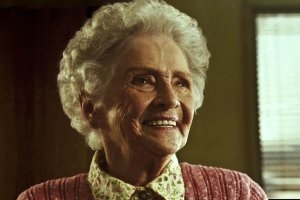 Hollywood: Stealing plot elements from British sitcoms and removing the humour.It wasn't all mild disappointment though, not at all. Some of it was actually infuriatingly terrible. In theory, God's army of angels waging war might be a decent idea for a movie. There's plenty of fan fiction about angels out there already; Paradise Lost, for example. Is it really so difficult for screenwriters to dig into biblical apocrypha and mythology for material? I mean, I guess there's the possibility that it might offend somebody, but as far as I know the kind of people who turn out for R-rated action movies don't care too much about that kind of stuff anyway. It really says something about Hollywood's relationship with religion when the most faithful adaptation of the Bible is Lord of the Fucking Rings.

Furthermore, for all his pomposity and angelic grandeur or whatever the hell you want to call it, Paul Bettany plays Michael as a terse, no-nonsense killjoy. When asked why bad things are happening all of a sudden, Michael replies with something akin to "You suck and God is sick of watching you touch yourself." This might very well be true, but couldn't you at least dress it up a bit? I'd at least expect a general in God's army to be a little more eloquent.

In addition to being tragically stupid, Legion is also insanely derivative. Offhand, I could name fifteen or twenty movies that Legion rips off in one way or another, but that would suggest the filmmakers were doing it all on purpose. Instead, I'm going to assume that they honestly thought they had something great here and just decided to run with it. Wasn't anyone curious as to why Screen Gems would willingly finance Dogma-meets-The Prophecy? At any point during the production, didn't someone on the set ask why they were making Rio Bravo-meets-Constantine?

No, I'm betting they didn't. Everyone just wanted a paycheck, so nobody said anything. If Hollywood University ever teaches a class for actors called "The Art of Slumming," Legion would be a perfect case study. Why else would Paul Bettany and Dennis Quaid even bother with this crap? In Bettany's case, I'm sure he's got marriage payments to make to Jennifer Connelly. Dennis Quaid, on the other hand, probably just likes pissing off God.

MINORITY REPORT: After The Book of Eli converted me to the righteous path last week, Legion ensured that I will never waver... through the force of sheer terror! Don't falter or the G-Man will send Gangster No. 1 to seriously fuck you up after he turns you into a Cacodemon! -David "Data Core Devil" del Vacote III