I know, I've heard how the greatest trick I ever pulled was convincing you I didn't exist. It's like my frigging Hotel California. Every time I show up, people just want to see the one where I convince you I'm not real. But I have a whole catalog of great tricks that you have been overlooking.

I can jump my whole body through a hoop just a little bigger than a hula hoop. I am still working on this one, give me a little time and I think I can get through a hula hoop. 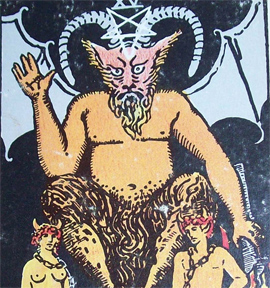 It's a living...I do this one where I set myself on fire and start screaming and acting like it hurts really bad and then I'm like, "Nope. Sssssssike. I am from hell so this is pretty much how I relax. Pitchfork up my dick, consumed by fire, it's a Tuesday."

Not so much a trick as just something cool, but I can roll a penny on the back of my fingers. Val Kilmer learned this from me through a magic mirror.

I have a tail. Not many people can say that.

One thing people never stop to think about is that I'm smart. I can do hard math problems in my head and I know about all sorts of history stuff that most people don't know. Like the dinosaurs all went to hell because they were lazy. Also there are billions of sloths in hell. Most of my minions are sloths.

Werewolves are my thing. Vampires too. You can't have Halloween without me. In fact, most of your wretched popular culture seems to be premised on things I invented, like blood-sucking monsters and investment banking.

Hitler. That was a good one, right? He is a painter and I'm like, "But what about the Jewssssssss? What if they did the Great War?" with my little snake tongue waggling in his ear. I tried it again with Bob Ross and he just ended up on a TV show. Go figure.

I spent the 1970s in Santa Monica and I was one of the original Z-Boys. There are like 500 tricks I made up skateboarding in pools and smoking weed. The ollie? Me. Grinding? Me. You're welcome.

I brought back the McRib. They cast it out forever and I sent it back to this realm. Again, you're welcome.

People can say it's genetics, but I deserve at least partial credit for big butts. Before me people thought they were just cushions for sitting. Turns out they are more than that.

Also...you know what? This isn't me. I don't want to brag about all of my tricks.

My wife has been telling me that I need to assert myself. Fine. That's true. This just isn't who I am. I keep it simple, spear up the ass, molten lava in the eyes, chewed to pieces by devil rats, that sort of thing. I am more of a blue collar devil these days. I just want to put my head down and get the work done, come home, knives in my dick, set myself on fire, eat my own guts, that sort of thing.

It's a job. Being the devil is a job. You want tricks, you go talk to a magician. They're all here in hell too.