EXPECTATIONS: I'm fairly excited for this one. No, it doesn't look like anything special, but both Wahlberg and Washington have incredible charisma and screen presence. The only question is whether they will play well off of each other. Well, no, I suppose "Will they just phone it in" is also a decent question. Considering the only American film by which I can quantify director Baltasar Kormákur's talent is the unremarkable Contraband, this feels like a bit of a late-summer gamble.


REALITY: I feel as though I was sorely misled regarding the number of guns in this film. There are a lot more than two, let me tell you. It's more like 200, seriously. Heck, there's like fifty guns in the third act, and one of them is on a helicopter. I mean, come on... Oh, oh wait. You mean the guns are not literal guns? "Guns" may refer to something else? Like... like a metaphor? Well, I'll be darned. 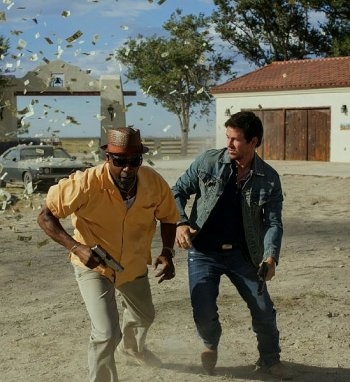 Anyone else reminded of The A-Team?The "guns" in question are DEA agent Bobby Trench (Washington) and Navy Special Forces Officer Michael "Stig" Stigman (Wahlberg), both of whom are undercover investigating Mexican drug cartels, and neither of whom knows who the other one is. When the two guns rob a bank looking to score money they can trace back to cartel leader Papi Greco (Edward James Olmos!), they wind up with $43 million and they don't know whose cash it is. It turns out to be bribe money for the CIA, and one of their more sadistic agents (Bill Paxton, somehow a third gun) comes after Bobby looking for it, while Stig deals with the wrath of his dirty commanding officer (James Marsden, who is not a gun at all).

In a more structuralist sense, the "guns" are not the characters of Stig and Bobby; they are Washington and Wahlberg themselves. Their surprising chemistry is the key to the entire film. One of the most interesting scenes takes place early on during the bank robbery, when the two actors spend the entire time wearing rubber masks. Many films would avoid spending too much time focused on their actor's covered faces, but 2 Guns does not shy away from it. Wahlberg and Washington come through perfectly under their covers, somehow causing you to think the latex faces have expressions. I'm not sure if this counts as intelligent direction on Kormákur's part or if it's just that these two actors have incredibly well-known personas that are recognizable to even the most casual of movie fans, but regardless, it's a risk that works.

The other risk that pays off here is the aforementioned third gun, Bill Paxton as Earl, the crooked CIA agent. I mean, Paxton is a fine actor and all, but there is no conceivable universe in which I should be counting his character's screentime next to Denzel Washington, and yet here we are. Paxton is clearly having fun chewing the scenery, and it's really too bad he isn't given more time in the convoluted plot to do so. In fact, of the three, he's probably doing the most actual acting without relying too much on a persona he's already built.

This year has been filled with politically charged action films. White House Down was basically a liberal fantasy, and The Last Stand was a fun romp through the minds of NRA-level conservatism. 2 Guns tries to insert some political context, but it has absolutely no commitment to it. Every few scenes, someone offhandedly mentions Mexico-America relations. Papi tells Earl that America loves his country "weak and corrupt"; Bobby runs into a pair of rednecks acting as self-appointed border patrol agents; and at one point Stig and Bobby are forced to cross the border illegally. There's even a bizarre association with chickens, and the act of "playing chicken," which I could not figure out until a rewatch of Breaking Bad taught me what "Chicken Run" meant in illegal immigration terms. The film clearly wants to make a point, but it has no idea what that point is. As a result, all of these references seem wildly out of place.

Despite these missteps, 2 Guns is a fun watch, almost entirely due to the strength of its cast. Wahlberg brings a bit of childlike wonderment to his trademark abrasiveness, and Denzel presses out his charm and laid-back demeanor in a way that made me realize he and Matthew McConaughey are actually the same person. No matter how hard it tries, there's not much more to this movie than the way-more-than-two guns and some cool explosions. However, that's enough to carry it along, making this one of the bright spots in a Smurfy-blue late summer.

MINORITY REPORT: Somehow, 2 Guns' cacophony of advertisements led me to believe that one gun was a Bad Gun, while the other gun was a Good Gun, and that they'd have to put aside their legal differences to become Two Neutral Guns. I take it that is not the case. - Joseph "Jay Dub" Wade