We've reached that point in the summer where the first wave of blockbusters has come and gone, and now we're left with two "A-list" movies that nobody cares about because they're not based on comic books. First up, Sean "Keanu Grieves" Hanson checks out White House Down. Next, Joseph "Jay Dub" Wade endures The Heat. Martin R. "Vargo" Schneider fares best with this week's indie offerings: Before Midnight and Joss Whedon's Much Ado About Nothing.

EXPECTATIONS: Listen close, because I'm only going to say this once: I like Roland Emmerich. I might not like all his movies, but when he's in top form (Independence Day and 2012), the results approach spectacular. Unfortunately, he only does two things well: aliens and natural disasters. The last time he incorporated gunplay, we got Universal Soldier. And here he is with a variation on Olympus Has Fallen, which itself was a loose remake of Die Hard. And it's PG-13. So while I perk up at the mere mention of a new Emmerich film, I just can't get jazzed for White House Down.

REALITY: Early in White House Down, a tour guide mentions Independence Day -- as in, "this is the building they blew up in Independence Day." This is a rare treat for those of us who wonder why characters in movies act as if they've never seen a movie, much less why they've never seen an earlier movie by the same director. Any characters in an Emmerich film who have seen an Emmerich film should know what a half hour of trite character-building necessitates: a half hour of unbridled destruction, a half hour for them to realize just how truly fucked they are and a half hour for them to overcome insurmountable obstacles to save the day. 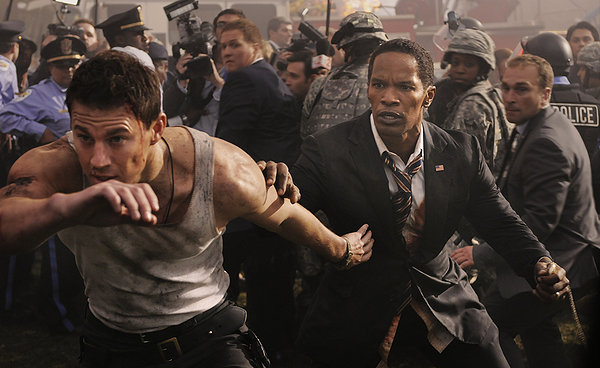 I think I saw this in a Die Hard once.

In this case, we spent a little more than 30 minutes getting to know President Sawyer (Jamie Foxx), D.C. cop Cale (Channing Tatum) and his daughter, Emily (Joey King); Secret Service agents Finnerty (Maggie Gyllenhaal) and Walker (James Woods); and Speaker of the House Raphelson (Richard Jenkins). Sure, there are even more characters of note, including the mercenary Stenz (Jason Clarke), but in a film with a million speaking parts, I suppose I have to be frugal.


Anyway, one or more of the above characters betrays his or her country and lets terrorists into the White House, where they hold some tourists hostage. Cale, who is told minutes before the attack that he's not quite good enough to join the Secret Service, becomes ... our nation's...only hope... as he tries to keep the president and his own daughter (but mostly the president) safe from harm.

White House Down is worth the price of admission if (a) you're a fan of Emmerich's oeuvre, (b) you don't care about subtext, (c) you prefer CGI explosions to good old-fashioned model work or (d) you were too young to attend Olympus Has Fallen. If (d) is true -- well, I've already used "fuck" twice so get the fuck out because this review is clearly too mature for you. Besides, you probably won't understand the following comparison: This movie is to Olympus Has Fallen what Vice Versa was to Like Father, Like Son. The Patrick Bergin in Robin Hood to its Robin Hood: Prince of Thieves. The Stacey Q to its Debbie Gibson. The Jamie Foxx to its Barack Obama. 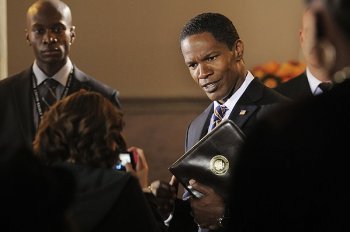 "That Independence Day guy should make a movie about me someday..."That last comparison is important because, while it would be nice to think that a movie's president and the actual president could both be coincidentally black, there are so many similarities that we're clearly supposed to draw the comparisons. Both appointed ancient white dudes as their vice presidents, both are liberal smooth-talkers, both championed cooperative foreign policy despite colorful opposition, both draw the ire of skinheads and anti-intellectuals, and -- this is the most damning one -- both are ex-smokers, which White House Down emphasizes with a close-up on the president's drawer full of nicotine gum. Because, after all, what is Obama best known for? The smoking. What? Did I fall, hit my head and return to 2008, when the Internet was all about that picture of Obama dangling a cigarette on the Capitol steps?

Wherever Obama doesn't conform to black stereotypes, the screenplay skews Sawyer so that at least he does. He grew up in a poor neighborhood where he dissuaded his friend, Ricky, from robbing a convenience store. He loves Air Jordans, so much so that as he's kicking a terrorist in the face he shouts "Get your hands off my Jordans!" And yet... he's presented as the most noble character in the film, a president who refuses to compromise his beliefs even at gunpoint. White House Down is clearly in love with Obama even as it comes from a very conservative context. Endemic to liberal presidents are movies about presidents coming under attack. With Bill Clinton in office, we saw In the Line of Fire and Air Force One. Now we're getting two in one year because Hollywood is never above cashing in on borderline-violent anti-liberal sentiment. 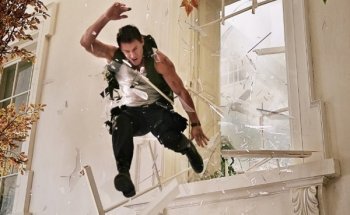 Channing Tatum escapes a meeting about GI Joe 3.And White House Down is as violent as they come. It's so violent that its greatest contribution to cinema culture might lie in its ultimate trivialization of the PG-13 rating as it revels in violence but obscures the consequences. Blood may leak from wounds and blood may wind up coating the walls, but when a character meets the business end of a minigun at close range, he crumples politely against the wall. Basically, White House Down stretches everything that's wrong with the opening sequence of Jack Reacher to 90 minutes. The film contains only one instance of the f-word and no titty. In a perfect world, this would begin a national discussion regarding the hypocrisy of the MPAA ratings board, but it won't -- so let's gush about Channing Tatum.

If nothing else, Tatum, who spends most of the movie sneaking around the White House in a soiled tank top, shoeless and muttering one-liners to himself, makes White House Down watchable. You could squint and pretend you're watching Die Hard, but fair warning: After 45 minutes of this, I got a headache. Tatum's appeal has always baffled me, but in the face of kindergarten-level CGI explosions and a screenplay that's frequently terrible (late in the film, Emily tells a terrorist "you're gonna go to jail for that!" while Cale drags a hostage by the hair), those charms were the last remaining comfort. And, as my grandpa once told me, sometimes the hungriest man will find a cashew in a lake of shit.

MINORITY REPORT: My favorite thing about Roland Emmerich is that no matter what ludicrous things he puts in his movies, you can rest assured he'll find the most entertaining way to destroy them. Godzilla's loose in New York City? Hit the Brooklyn Bridge with missiles! Building giant arks to save humanity? Crash 'em into Mount Everest! - Joseph "Jay Dub" Wade