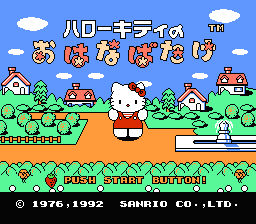 At a Glance: I was too busy being the hardest badass around as a kid to get in touch with my girlie side. Barbies and My Little Ponies alike were vanquished to the Great Swirling Abyss in favor of the Mighty Dinosaur, which my parents didn't appreciate when it came time to take the nearly-as-mighty "Number Two." But lately I've been finding small pink things adorable, although don't get your hopes up because they don't include your penis. So when I picked up Hello Kitty's Flower Shop, I figured, "Well, it might suck, but at least it'll be cute!" Cute like a sledgehammer. 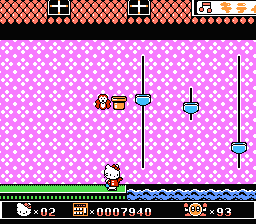 No, you can't make a horrible game better with sliders.Story: There isn't one, really; Kitty just wanders around and waters plants, although to spice it up you get a cut scene every few levels of... Kitty wandering around and watering plants. I'd give it a pity point because it's a little kids' game and kids will play anything, except it's literally the same fucking "movie" every time. Once you've watered the hell out of all the flowers in this Dadaist torture house, you are treated to an image of Kitty hopping up and down and thanking you for the blood sacrifice of your dignity. Predictably, the game never scored an English release. Heck, its name isn't even Hello Kitty's Flower Shop if you literally translate it; it's Hello Kitty's Field of Airplane Flowers. No no no, don't be so self-conscious, Japan! It makes perfect sense! Please remove that ceremonial knife from your bowels! Or don't.

Gameplay: Who knew tending the botany lab could be such fun?! One to five flower pots are scattered in each of the 18 idiot levels. You must find them and, using your trusty watering can, hydrate them into submission! They grow in four stages, which gives you four full seconds of listening to the delightful "I am watering hell yeah" sound effect, which soon becomes like deep-throating poison ivy! The point is to water all the plants to advance to the next clone-level, but sometimes they also cough up magical bonus fruits! Occasionally they'll be things like a free life or invincibility, but mostly they add to your mysterious "score," which I'm sure any four year old girl will be watching like a hawk!!

But all is not well in the land of your floral adventure! Doe-eyed critters putter about, and one touch from any of them turns Kitty into a shivering, sobbing wreck. Fortunately you have a SUPAA KAWAII ^_^ mallet, which you

HARDCORE EDGE-OF-YOUR-SEAT WATERING ACTION!!!can use to smash their adorable spinal columns so hard they'll be twitching upside-down for awhile, even in mid-air. Pest control is often harder than it looks, as baddoes frequently pop up directly between the completely freakin' endless floating platforms that cross and weave together, Escher-like. Nevermind that hitting your platform instead of an animal causes you to change directions! I give "Gameplay" a pity point only because, amazingly, they managed to get friction right.

Graphics: They are pretty terrible, considering '92 wasn't THAT long ago and not long before the colorful Super Mario Bros. 3. 18 levels and everything looks the fucking same. Seriously, the only attempt at even slight variety is that the color of the shop's wallpaper occasionally changes -oh wait! The "bonus" levels -which are exactly the same as all the other levels- have fish!! Even the cutscenes -I'm sorry, the cutscene- is just a little video of you playing the game. Jesus, they could have at least, I don't know, made different colored flowers? More enemies? Something??

Enemies: All enemies are either of the "crawling" or "fluttering" variety. In category one, we have snails and squirrels. In category two, we have moths and bats. And that's it. In the whole game. Four enemies. Oh wait, we do have demonically possessed beach balls that travel along a fixed-but-sometimes-erratic path, often bouncing juuuuuuust enough to kill you when you think you're a safe level above them. God I hate them. Ms. Kitty has Hello Hammer with which to defend herself, but this merely temporarily incapitates them; the only way to vanquish them entirely is to get a strawberry or see the magical 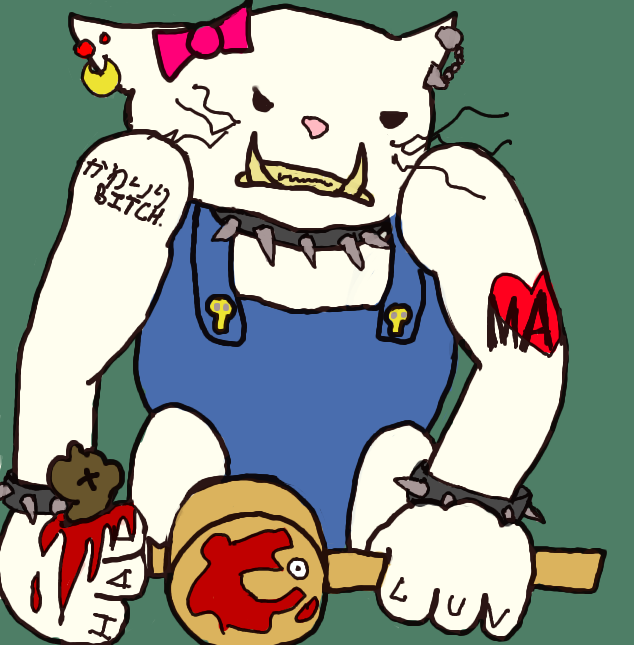 It's kind of like this, if you think about it hard enough. But please don't.genocide fireworks when you beat a level.

Fun: As someone who was once a little girl, I can attest that I would've enjoyed my own mother's funeral more than this game. What cracks me up most is that they wanted to make a "cute" game for little girls that was nonviolent, but they weren't clever enough to create something that was, you know, actually non-violent. Instead, they made a game that had stupid, inane violence which probably did more harm than any blood-spewing gorefest. At least instilling a child with a healthy fear of zombies is logical, but making your daughter see chipmunks as a deadly threat? Yeah okay, when you find Alvin's crushed skull on your doorstep and a bloody hammer in your smiling cherub's hands, who's focusing on the family now?


Defining Moment: You know how Awesome Possum talked smack when you didn't hit a button? Hello Kitty does a cute little inaction-action, too! She sits down, gets out a book.. and reads. Yes, even the star of the game wants you to turn off your Social Interaction Substitute Device and read a fuckin' book. I feel bad about crucifying a children's game, but nothing could have made me enjoy Hello Kitty's Flower Shop as a kid.