I Would Consider PurchasingThat for a Dollar!

My update today was originally going to be a piece entitled "Mistake" about the defacing of a Hiroshima memorial in Japan by a Japanese nationalist. About 2/3rds of the way through I realized it was completely humorless and so I shelved it to spare you guys the grim reading on a monday morning. If you are so inclined you can read the completed piece below. Some of the pictures are pretty grim. Good or bad, feedback is always appreciated.

When the United States liberated concentration and death camps in Germany during the Second World War the hardened soldiers were appalled at what they found. The discovery of huge mounds of emaciated corpses and mass graves was so horrific that it was heavily documented just so that it could be believed. Even to this day some refuse to acknowledge that it really happened, but the soldiers there at the time did something to ensure the Germans themselves could never deny it. At Buchenwald, Flossenburg, and others the liberating forces spread out to nearby German towns and villages and rounded up the adult civilians. These civilians were then marched past the grim pyramids of dead bodies and in some cases made to bury them. Many photos exist of women in their Sunday best recoiling or covering their eyes at the sight. 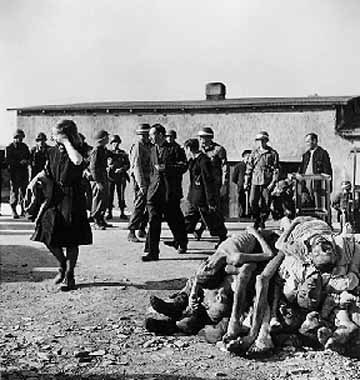 Nazi Germany was crushed utterly. The Fatherland was bombed almost to rubble and Germans were forced to stare their sins in the face. They were made to look, long and hard, at what Germany and what the German people had done. Auschwitz is now a popular if somber destination for tourists to come and see, to reflect on the atrocities the Germans committed, or to remind themselves of how terribly close their ancestors came to extermination.

In Hiroshima Japan there is a concrete cenotaph inscribed with the names of every man, woman, and child known to have died in the atomic bombing of Hiroshima. The bare archway matches up perfectly with a skeletal domed building referred to as the "atomic bomb dome." It still bears the blackened stones and twisted metal of the atomic blast that killed over 70,000 Japanese on that day in August of 1945. Beneath the arch is a stone tablet that reads "Let all the souls here rest in peace as we will never repeat this mistake." 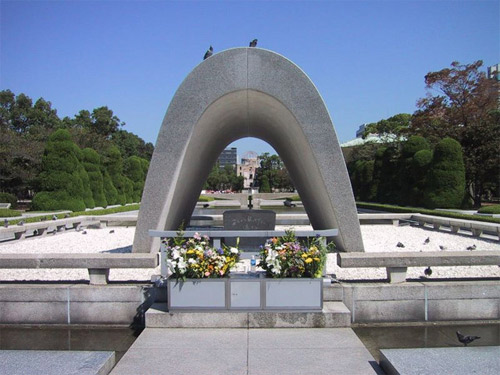 A few days ago a 27 year old Japanese man named Takeo Shimazu used a hammer and chisel to carve the word "mistake" out of the tablet. He almost immediately turned himself in to police.

"Why should the Japanese apologize in a monument they built?" Shimazu asked. "It is the Americans who committed the mistake."

Shimazu is right in a sense: it is a mistake made by the United States of America that is responsible for him taking a chisel to the monument to remove the word "mistake." It's just not the mistake he thinks it is. All over Japan those who are strongly nationalistic have begun to look back on their nation's defeat in the Second World War with a twisted nostalgia. They feel that it was the United States and our embargoes that forced them into mounting a daring attack on Pearl Harbor and they feel that we committed atrocities against them by dropping the atomic bombs on Hiroshima and Nagasaki. Our secret weapon was cheating of the worst sort.

Worse still, a large number of this growing body of Japanese nationalists believes the massacre of at least 200,000 Chinese in Nanjing (commonly known as the Rape of Nanking) to be fiction. But this terrible amnesia is still worse when it comes to Japan's collective memory of Japanese medical experiments conducted during the Second World War. During the course of the war Japan established more than two dozen medical units to investigate the possibilities of bio-warfare and experiment on human subjects. The most infamous of these units was Unit 731 under Lieutenant-General Shiro Ishii. Japanese history textbooks do not mention the existence of Unit 731 and the Japanese government would not even officially admit it existed until 2002. 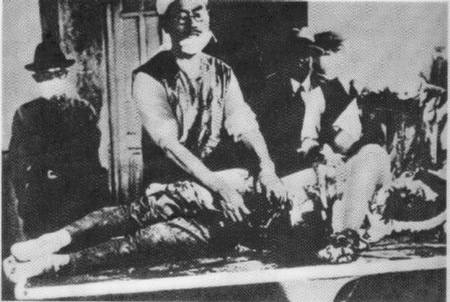 Unit 731 was established in 1932 and located in Pingfan near the north eastern Chinese city of Harbin. The unit consisted of thousands of doctors, nurses, medical personnel, and various military assistants and advisors divided into eight divisions. The first and second division were those responsible for conducting human medical experiments on prisoners of war and unfortunate Chinese rounded up in Harbin and elsewhere. Just a glimpse of the atrocities at Unit 731 is enough to churn the stomach even to this day.

Let's take a look at some fun facts about Unit 731.

- Human test subjects were called "logs" by personnel and were referred to as "monkeys" in medical reports despite the obviously human bodies in photographs.

- A poison gas test conducted on a Russian woman and her daughter records clinically the way the woman laid atop her daughter in a futile attempt to protect her from the poison gas. Both subjects died.

- Prisoners would be shot, often fatally, so that surgeons could practice removing bullet fragments. If a prisoner survived the procedure their wounds were intentionally infected with bacteria to chart the spread of gangrene.

- Test subjects would be forced to march through an open field while an aircraft passed over head and dropped a bomb containing fleas carrying the bubonic plague. Similar tests were conducted with typhus, cholera, and various poison gasses. Infected subjects were often vivisected while conscious so that doctors could observe their infected organs while still functioning.

- Pregnant women (often impregnated by medical personnel) were vivisected to remove and examine the fetus.

- One former medical assistant assigned to Unit 731 recalls seeing glass specimen jars containing entire pickled humans, some of them bisected, with the nationality of each specimen stamped on a brass plate beneath the jar denoting Chinese, Korean, Russian, American, French, and others.

- One experiment involving a pressure chamber records the point at which a human's eyes burst from their sockets because of the pressure.

All told nearly 3,000 Chinese were killed in experiments at Unit 731's Harbin facility along with untold hundreds of Koreans, Russians, and even Australian and American prisoners of war. But Unit 731 was not the only Japanese unit conducting grotesque medical experiments on humans. 26 of these units are known to exist and all of them were involved in either the development of bio warfare agents or medical experiments on unwilling human subjects. No one knows how many died at the hands of these lesser-known units as the extents of Unit 731's atrocities are still being uncovered.

During its latter years of operation Unit 731 conducted a number of test attacks with its bio warfare agents, infecting thousands of Chinese villagers with a variety of diseases. Near the closing days of the war Lieutenant-General Ishii ordered Unit 731's facilities to be burned to the ground and all evidence of the experiments being conducted there destroyed. In the process Ishii intentionally released thousands of plague rats on the Chinese countryside and spread a plague there that would ultimately kill more than 50,000 Chinese in the years following the war.

US intelligence had learned of the existence of Unit 731 before the end of the war and it covertly rounded up as many scientists associated with the Japanese bio warfare program as possible. After thoroughly extracting information from these people the United States reached an agreement with Ishii and others that would allow them to maintain their secrecy and go unpunished. Not only did Ishii and most of the others responsible go unpunished, they wildly prospered in post-war Japan. Ishii himself became a multi-millionaire and founder of Green Cross, a Japanese medical supply corporation specializing in human and artificial blood. No one associated with Unit 731 expressed even a hint of remorse until very recently. Some even seemed angry that their work was halted by the end of the war and all of their valuable research was not allowed to continue. 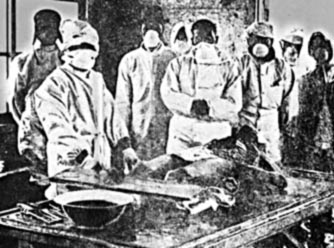 A pregnant woman is vivisected and the child is removed.

Controversy still surrounds Unit 731. Those Japanese who accept it as a reality focus curiously on the American's admittedly grievous failure to bring any of the responsible parties to trial. Many Japanese refuse to believe it happened. China remains justifiably indignant over the incident and Japan's refusal to fully recognize it, but the Chinese government has twisted the indignation into anti-Japanese histrionics for political purposes.

The US government has scarcely recognized its own involvement and has treated the few remaining American survivors of Unit 731's experiments with astonishing apathy. Rumors persist, with little evidence to date, that the United States used techniques gleaned from Unit 731's research during the Korean War. These accusations originate primarily from the Chinese and would normally be easily ignored for that reason. The fact that America's proven involvement in the cover-up has been so extensive lends them some slight credibility.

The "mistake" was not America's decision to drop the atomic bomb on Japan as Takeo Shimazu would have us believe. The mistake was America's hideous willingness to accept Japan's criminality for our military benefit. By not forcing the Japanese to face their demons and acknowledge the appalling atrocities they had committed we unintentionally left a culture that still harbored the seeds of its evil. No matter their individual involvement the German people were forced to acknowledge and accept their role in the terrible saga of the Second World War. The Japanese never faced such a moment of truth and, though beaten, their nationalism was resurgent a generation later. Today the youth of Japan do not learn about Unit 731 in their text books. They do not attend museums dedicated to their atrocities and their government has flatly refused compensation to survivors of Unit 731's medical experiments.

Our mistake lives on in Takeo Shimazu.